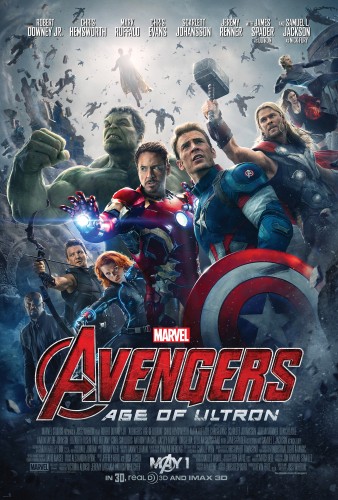 SYNOPSIS:
When Tony Stark tries to jumpstart a dormant peacekeeping program, things go awry and it is up to the Avengers to stop the villainous Ultron from enacting his terrible plans.

REVIEW:
Avengers: Age of Ultron packs a punch and delivers a satisfying, rousing good time at the theater. But is also dances dangerous close to collapsing under its own weight. The film is packed full of colorful superheroes, equally colorful villains and a non-stop stream of action sequences that thrills – and exhausts – its audience. Writer-director Joss Whedon expands on the first Avengers film jumping smack dab into a raid on a Hydra stronghold. The gang is all here: Iron Man, Captain America, Thor, Black Widow, Hawkeye and the Incredible Hulk. It is exhilarating, flashy and, most importantly, fun. If nothing else, that is what Avengers: Age of Ultron is unadulterated, geek-fueled, four-color fun. It manages to hit every necessary high note from amazing action to sympathetic quiet moments to witty dialog. The stakes are high, the villain is over-the-top and the surprises are stacked at a dizzying pace. Breathtaking, mind-numbing and non-stop, the movie is Marvel mixed with MTV with the blender juices up to ultra-high. All the key players are on board: Robert Downey Jr., Chris Evans, Chris Hemsworth, Scarlett Johansson, Jeremy Renner and Mark Ruffalo along with a few other familiar faces. They are joined by new comers James Spader, delivering a deliciously sarcastic Ultron, and Elizabeth Olsen & Aaron Taylor-Johnson as “the twins,” Wanda and Pietro Maximoff also known as the Scarlet Witch and Quicksilver.

The story is very simple at its core but overly convoluted in its dressing. The basic plot begins with Tony Stark and Bruce Banner arrogantly striving to harness the power nested in Loki’s Scepter to create a world-changing A.I. They dream of “peace in their time.” But instead of a savior, they create the devil, a sentient robot named Ultron with a unquenchable mad-on for his “father,” Tony Stark. This hatred for Stark and the notion that to save the world he must evolve the human race – and by evolve, he means purge – the unstable Ultron sets out to raise an entire city miles into the sky and send it spiraling back to Earth creating a catastrophic even rivaling the fabled meteor that wiped out the dinosaurs. Bad guy has evil plan and the good guys must stop him. Which is all that is needed to sum it up.

However, from there the plot begins to fatten up pretty quickly. There is a sprinkling of Hydra and Baron Strucker (Thomas Kretschmann) who also are developing enhanced humans such as Wanda and Pietro Maximoff, a speedster and a “witch” who’s powers affect the mind. A short sequence of events re-introduce the concepts of Wakanda and Vibranium and set up a potential future villain in Ulysses Claue (Andy Serkis), all of which should return in the upcoming Black Panther film. The film treats viewers with a quick look back at Thor’s Asgard and Captain America reuniting with Peggy Carter all to set up needed motivation and surrounding subplots. Hawkeye is treated to some much needed background and screen time while Bruce Banner and Natasha Romanoff begin an awkward and oddly forced romantic twist. It keeps going with mentions of the Infinity Gems, S.H.I.E.L.D. and Pepper Potts versus Jane Foster. The film has its audience dazzled with rapid fire imagination zipping past the retina into their skulls, maybe some will catch most comic book nods, some mights miss a few hidden Easter eggs, all will need to catch their breath. So full of information, visual and exposition, the film demands multiple viewings.

There is a comfortable excitement that surrounds seeing the favorites back in action, together again, battling an army of Hydra soldiers or a swarm of robot monsters. Robert Downey Jr. as Tony Stark (Iron Man). Chris Evans as Steve Rogers (Captain America). Chris Hemsworth as Thor. Scarlett Johansson as Natasha Romanoff (Black Widow). Jeremy Renner as Clint Barton (Hawkeye). And, Mark Ruffalo as Bruce Banner (Hulk). The film quickly delvers an early money shot with the entire group, united, attacking a Hydra base gloriously presented in one single shot. It is a incredible thrilling moment in a film full of thrilling moments. The films is primarily Tony Stark’s film, his dealing with what he has done – creating a monster – and his own arrogance, realizing he may have just destroyed the best thing he has ever created, the Avengers. The film returns to his conflict as both Ultron and the twins speak about him specifically as the protagonist instead of the Avengers as a whole. Sadly, Captain America and Thor are in the background for most of the film while Rogers does get a recurring joke at his expense when he reacts to Stark’s use of of foul language. Not to say there is not plenty of them in the movie, they just do not get the attention they could have. Instead Hawkeye, Banner and the Black Widow get more characterization and Renner, Ruffalo and Johansson are each up to the task. Thankfully, Renner is allowed to make up for his being sidelined for much of the first Avengers film. He also get much of the best lines in the film as well.

For Ultron, the film’s big bad, Whedon smartly casts James Spader to match quips with Robert Downey Jr. Spader embodies Ultron with a sarcastic, unbalanced tone that is both entertaining and scary. He is very close to being a mad god. Oddly, however, the character of Ultron feels rushed with unclear motivation and direction. Most everything hinged on his hatred for Stark but the nature and extent of this hatred is left loosely defined. There is never any struggle to his character, being a robot, an A.I., he is so detached from humanity that there is little question he is evil for evil’s sake. And that is rarely as compelling as a good villain needs to be. Visually, Ultron is stunning. Vocally, Spader is unparalleled. Script wise, the monster’s character and rich history feels left behind in decades of comic book appearances. So much feels left unsaid, not even hinted upon. Ultron is spectacular but is the closest of miss there possibly can be, mostly because of Spader. In the end however the conflict has no heart, no soul, leaving a hollow void.

Avengers: Age of Ultron introduces a few new heroes to the mix, perhaps too many. Audiences are treated to the Scarlet Witch (Elizabeth Olsen as Wanda Maximoff), Quicksilver (Aaron Taylor-Johnson as Pietro Maximoff) and the Vision (Paul Bettany). Olsen and Taylor-Johnson are suitable as the twins but are saddled with horrific nondescript European accents bordering on awful. They do manage to make the most of their characters and the brief amount of development afforded them with Olsen on the winning end. Their bonds are presumed due to exposition and relation and never truly presented to the viewer in a heartfelt, meaningful manner. This sullies a later plot twist that should have been emotionally devastating but rings a tad flat instead. The Vision on the other hand nearly steals the show until he gets lost in all the chaos and mayhem.

To his credit, director Joss Whedon balances the huge cast and overwhelming amount of plot with confidence and expertise much like Han Solo navigating the asteroid field in Empire Strikes Back. He zips and slingshots through the action with the characters bouncing in and out of the frame with a frenzied tornado of visual treats and eye candy. He miraculously hits every important point in the Marvel cinematic universe: Iron Man, Thor, Captain America and the Hulk. He reveals his love for Hawkeye, the Black Widow and Bruce Banner with the attention provided to their back stories. While the action and effects are extraordinary, it is these smaller moments that shine through all the manic superhero madness, Hawkeye’s visit home and the relationship between Banner and Romanoff. The early on party scene that has the characters relaxing, sharing stories and developing friendships is as exciting and memorable as the bigger battles and fantastic feats of CGI animation. Whedon leaves a remarkable and influential stamp on the franchise and the characters form here on.

Avengers: Age of Ultron may be the pinnacle of super hero cinema chock full of everything that is good and bad about the genre. The film is so full of imagination and joy that it is easy to look past the weaker elements. It wins over its audience by brute force like an angry Hulk beating down a busy street facing off Tony Stark as Iron Man stuffed inside yet another, larger iron suit. Overkill, perhaps. But the film is like a giant tub of a favorite flavor of ice cream, every bite is so tasty, so mouthwatering and delicious. The film is satisfying in its visuals and its core characters making the most of the cinematic universe Marvel has created. All the actors fit perfectly into their roles. Joss Whedon steers his colossal ship with a steady hand and a direct path to the conclusion he desires. Every brick, stationary or falling, sits perfectly in place. Yet, somehow, the film manages to beat its audience into submission leaving them wondering what is missing in the end. It is a delicate balance expertly achieved and maintained, an orchestra of comic book geeky goodness. The film leaves its audience with a lasting smile providing an exhilarating 2 and half hour roller coaster ride. It is a wild success despite some flaws that threaten to make it far less than perfect.