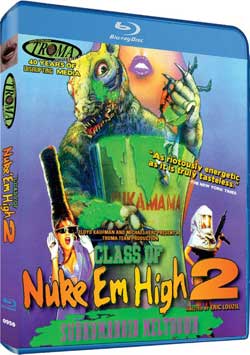 Where to start with 1991’s The Class of Nuke ‘Em High Part II: Subhumanoid Meltdown? Well, we’re talking about Troma aren’t we? After 30 years in the game, it would be amiss to suggest that no one knows what they’re getting when they load up a Troma flick. The company’s USPs has always been an anarchic desire to throw a load of violence and nudity at the screen and see what sticks. Lloyd Kauffman’s approach to production is the equivalent of running blindfolded into a crowd clutching scissors the wrong way: Someone’s going to get offended and possibly hurt.

If I had to single out the one defining factor of the flick, then I think I would be churlish of me not to focus all of my praise on the hairstylings of Brick Bronsky. Amidst the puss, blood and breasts, his exotic combination of pony tail, crew cut and Matt Smith fringe stands tall and strong as a monument to what can be achieved if you have a total disregard for what a barber will to your follicles. Even as a 100-foot mutant squirrel urinates up against a cooling tower, my eye was drawn to Bronsky’s haircut with the force of a meteor about to crash onto the surface of the earth. His Aryan mane is, in a word, breath taking. 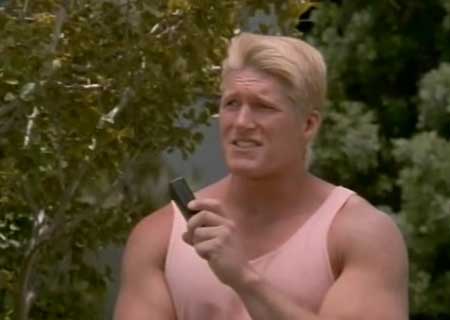 But I digress. Set several years after the original Nuke ‘Em High, Part II brings us up to speed with the new campus in Tromaville. Nuke ‘Em High is now Tromaville Institute of Technology – or TIT for short *snort* – a college built into the town’s nuclear plant, where its students get extra credit for helping with menial tasks. Task such as harassing large breasted students, spraying down hazardous material and cleaning up after any students that happen to explode as a result of the high intensity radiation that permeates on the college grounds. Continuing the previous installment’s parody of Class of 1984, the student population of TIT bound around in quasi-futuristic clothing, bikinis or simply nothing at all. 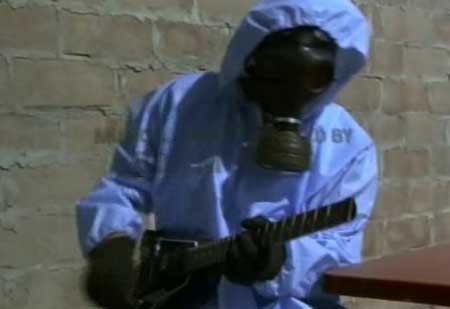 The aforementioned Bronksy plays Roger, student and prolific writer for the college newspaper. Despite, his Schwarzenegger-esque physique and gorgeous hair, Roger is not a hit with the ladies. When there’s a call out for students to partake in a sex study for the college, Roger grabs the opportunity with both hands. There he meets Victoria, who he immediately falls in love after they’ve done the nasty. But all is not as it seems, for Victoria is in fact a Subhumanoid created in the basement of TIT by Professor Holt (Lisa Gaye), the college’s leading voice in bioengineering. Whilst Victoria looks human, she and all her subhumanoid kind have a second mouth in place of her belly button! Will Roger find out the truth? Do you care? If so, I won’t say. 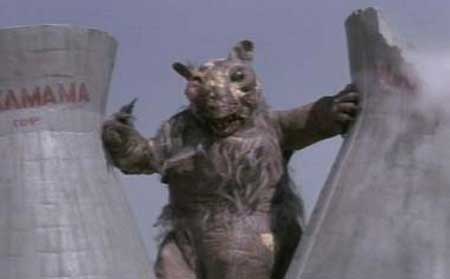 Whilst upping the ante of its predecessor, Class of Nuke ‘Em Part II feels incredibly disjointed. The plot – which can just about be squeezed on to a beer coaster – is padded out by unrelated scenes, poorly dubbed exposition and, at one point, by a guest appearance from the Toxic Crusader himself in a bizarre scene filled with unfunny meta-references to previous work. 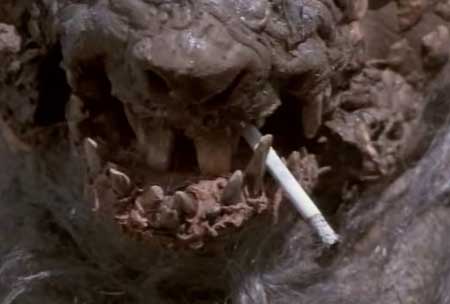 What you can’t say about Nuke ‘Em High is that it isn’t imaginative. It’s unlike any other film that’s come before it or after. Which the exception of perhaps Part III and Kauffman’s reboot Return to Nuke ‘Em High. You’re either going to lap this kind of stuff up or you’re going to be reaching for the off switch. That’s why it’s so hard to critique films from the Troma stable. As I mentioned when I took a look at Croaked: Frog Monster From Hell, no matter what others say about this film, if you’re so inclined, you’re going to push your grandma into a vat of acid to get hold of a copy.