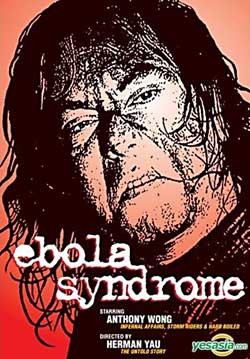 Kai is getting busy with the boss’ wife when her husband walks in with a friend and kicks his ass. He ends up killing them all but leaves behind their young daughter, Lily. Fleeing to Johannesburg, he takes up a position as a chef in a Chinese restaurant. Years later, sexually frustrated and unable to find anyone willing to get him off, he rapes an African native and contracts the Ebola virus. The virus spreads through Johannesburg, killing many innocent people, but Kai survives – it turns out he is a carrier, unaffected by the symptoms of the disease. After killing his current employer and his wife, he goes back to Hong Kong. When Lily, now an adult, becomes aware of his presence there, she tries to get the cops to go after him, before he causes the virus to spread any further.

First identified two decades before the release of this Hong Kong production, global awareness and dread of the Ebola virus skyrocketed in the wake of the ongoing outbreak that occurred at the end of 2013. This lends Ebola Syndrome a further layer of unease, while at the same time amplifying the fissure between the seriousness of the subject matter and the stupefying silliness of its treatment. 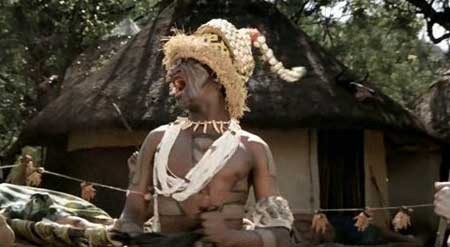 Hong Kong movie villain par excellence Anthony Wong reunites with Herman Yau, his director on The Untold Story (1993), for one of the most infamous Category III movies of them all, censored even for its Hong Kong release – despite being saddled with the most restrictive classification. As a result (and despite being subjected to further trimming in other territories), the official “uncut” version of the film suffered numerous minor cuts to about fifteen sequences, totalling more than 2 minutes of gory footage. The extended (i.e. fully uncut) version is difficult to obtain, which is all the more unfortunate as many of the cuts are quite obvious and disruptive.

In any version, however, Ebola Syndrome is one vile, nauseating and thoroughly enjoyable flick. It makes mince meat of the concept of political correctness – much like Anthony Wong’s character in both Ebola and The Untold Story does with human flesh, serving it to diners in a restaurant while giggling like a nancy boy. The film is a smorgasbord of misogyny, racial slurs, dismemberment, cannibalism, jerk-off humor, sexual violence, golden showers, mistreated children, cruelty to animals, autopsy horror and ejaculation into foodstuffs (in a scene where Kai beats his meat – in both senses of the term). 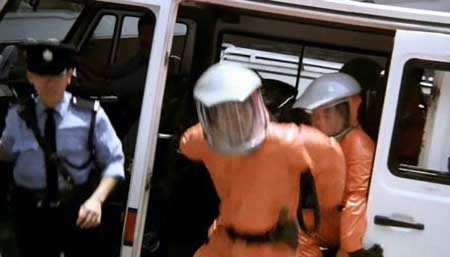 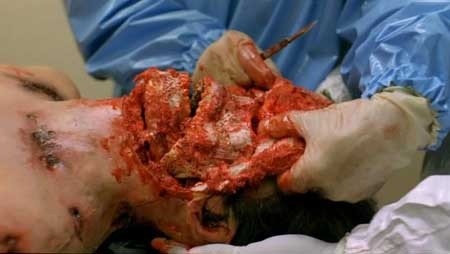 While sleaze is clearly the order of the day – instead of just a side dish that leaves you wanting – Ebola Syndrome is surprisingly well-made and skilfully paced. Backed with a strong narrative, director Yau ratchets up the tension bit by bit, leading to a climax that erupts in a frenzy of nasty excess. Part of the reason the film is so compelling is that the story unfolds in parallel strands; it combines the search for a dangerous criminal with the trappings of an epidemic thriller. Perhaps it is no mere coincidence that it was released the year after the Hollywood film Outbreak – although from memory the main character in that film resists the urge to rape one of the natives before braining her with a rock. 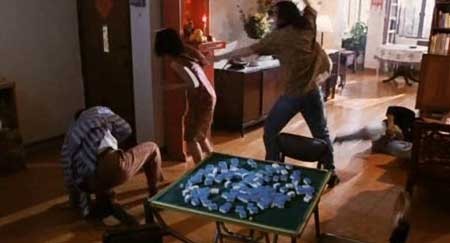 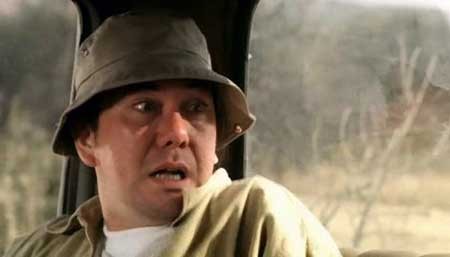 At the same time, that familiar brand of puerile humor typical of Hong Kong exploitation is in full evidence here. No other celluloid tribe has the ability to wallow in utter stupidity while simultaneously portraying the most hideous acts of degradation. This will either make the material all the more horrifying or take the edge off completely – or otherwise make the whole experience utterly perplexing. When Kai, mid-coitus and deliriously horny, begs the boss’ wife to concentrate on achieving a rhythm of two slow strokes followed by three quick strokes (soon followed by his enraged boss picking up a pair of scissors and yelling, “Your dick has committed adultery and it must be punished!”), it has the effect of challenging the more level-headed viewers to allow themselves to be offended by the nastiness to follow. 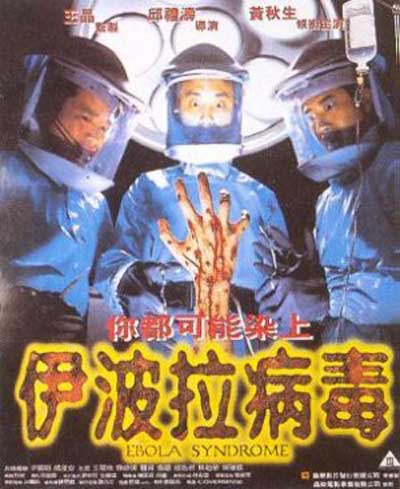 It doesn’t get any more shameless – or ridiculous – than the finale, when Kai is being chased through the streets of Hong Kong, carrying a child hostage, spitting infected blood at anyone who gets too close. When injected with poison by one of his pursuers, he immediately takes to himself with a meat cleaver, cutting out a massive chunk of his own flesh like he were removing a splinter. If cinema were a garbage can, and its patrons were alley cats scavenging through the filth, desperate for whatever scrap they could find, this film would be a rancid piece of trash rotting at the bottom. In that sense, Ebola Syndrome deserves every accolade and recommendation. Bon appétit!