A feature film director and his crew begin to question their debut production when the spirit of a murdered actress possesses a celluloid reel.

Japanese director Hideo Nakata achieved a degree of fame with Ringu, and he establishes his subtle style with this debut film, Joyurei, or as we call it Ghost Actress (Don’t Look Up).

This film, is very well-acted, occasionally creepy, and a brief 73 minutes. It is story within a story.. And to clear up some of the confusion you may experience while watching this film, the secondary story involves a woman that murders her friend, takes her place, and raises her victim’s young child. Sorry folks, let me get this over with. If it is a plot you are seeking, look elsewhere.

You’re left wanting more with this story. On the set of a dark war time drama at an old movie studio, a young director, Toshio Murai (Yanagi), is trying to complete his debut film. The two starring actresses, Hitomi Kurokawa and Saori Murakami, play sisters in his film. Murai has a crush on Hitomi (Shiroshima), the seasoned leading actress, and keeps a photo of her by his bed. The younger and less experienced actress, Saori (Ishibashi), is annoying and likes to have recess on the set. The production of the movie is consistently interrupted by strange occurrences and the cast and crew begin to get spooked. Whatever you do, just don’t look up! And don’t ask old movie editors to watch old movie reels, they might get burned! 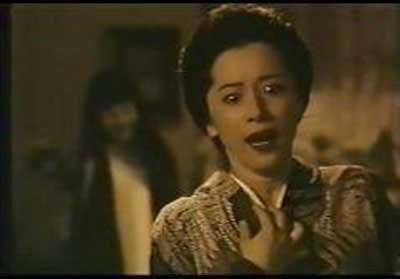 When Murai reviews the shoot, he is shocked to see that somehow, just somehow, scenes from an unreleased (and presumed destroyed) drama from years earlier is intermingled with his negatives. For all of you hard core horror film lovers like me, the scariest part of this movie is this: As Murai is watching his footage, the scene is interrupted by a film within a film of an unidentified actress on a movie set, with something that looks like a woman behind her, long black hair, pale skin, out of focus, laughing hysterically. Was this the ghost of an unhappily dead leading lady? Yes, that’s it, period.

Murai is fascinated with the freaky footage, as it looks strangely familiar to him. Murai and Hitomi begin to see a ghostly woman and eventually there is a tragic death on the set. The production shuts down for a formal investigation. Murai has only three days left to find out what is going on and finish the shoot.

Murai looks into his own past, and finds a frightening connection between the film he’s shooting and the strange footage he’s uncovered.

Entertaining movie, great acting, but glimpses and an out of focus, partially hidden ghostly figure is as good as it gets here. The film lacks building momentum for the ending, which may leave you lost. Don’t expect to be overwhelmed by supernatural forces that spin you out of this world.