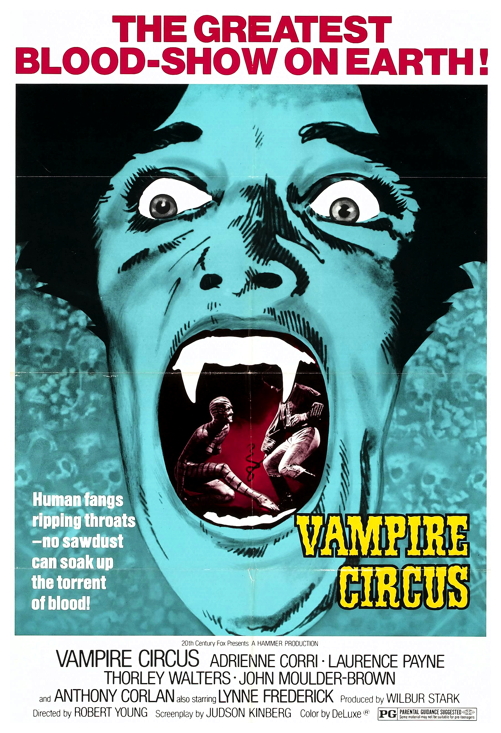 SYNOPSIS:
“A village in Nineteenth Century Europe is at first relieved when a circus breaks through the quarantine to take the local’s minds off the plague. But their troubles are only beginning as children begin to disappear and the legacy of a long-ago massacre is brought to light.” (courtesy IMDB)

REVIEW:
The early seventies were breakthrough years for horror in the cinema. The success of Rosemary’s Baby (1968) had something to do with this, and many horror films were made right through the seventies, but the biggest commercial breakthrough was that of The Exorcist (1973). British Gothic cinema was still active in the late sixties but there were signs that it was losing heart. Most of these films were costume dramas set in the nineteenth or early twentieth century but, after Rosemary’s Baby, the public was beginning to want its horror set in the here-and-now, and mostly in urban settings at that. Blood From The Mummy’s Tomb (1971), directed by Seth Holt, was one of Hammer studio’s more stylish period productions, but most Hammer films of this period were quite weak, especially the Dracula films set in modern London, Dracula AD 1972 (1972) and The Satanic Rites Of Dracula (1973). The lesbian-oriented Karnstein trilogy of films – The Vampire Lovers (1970), Lust For A Vampire (1971), Twins Of Evil (1971) – were also disappointing. 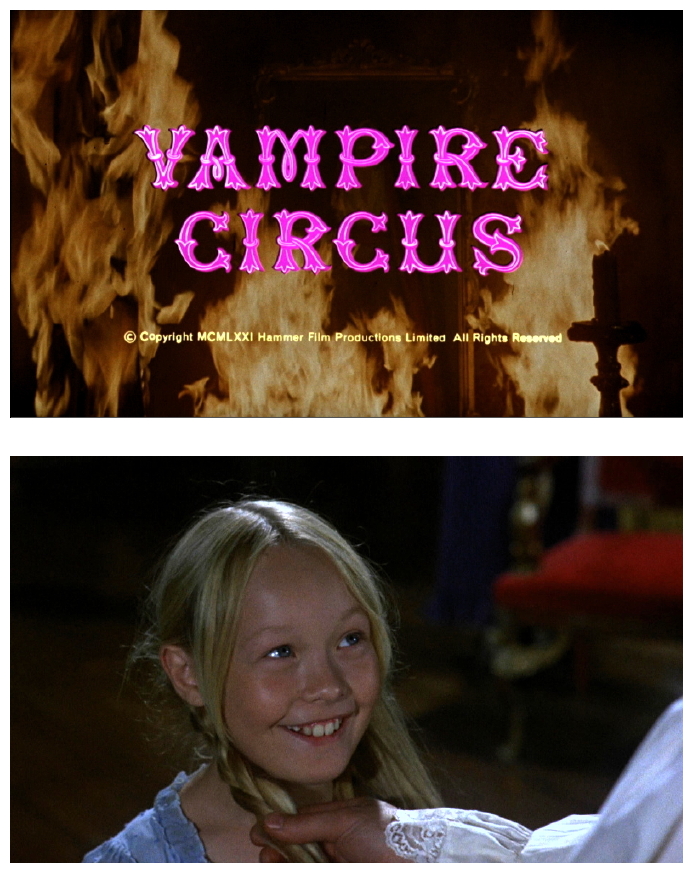 Just when it seemed that they had played out the vampire theme altogether, Hammer came up with what may be the best of the lot, an often overlooked film entitled Vampire Circus (1972). It’s not so much a good film as a good bad film. That is, it’s not good in the conventional ways in which films are good. The script is ragged and the acting often wooden. What it does have is an iconography as conventionalised and ritualistic as that of a Japanese ‘Noh’ play, especially in the choreography of the bloody finale. When vampires snarl, they always throw their heads back, their mouths when lifted are always surrounded by a formal ring of red blood after they have fed. This is almost a vampire ballet. The film opens with the staking of vampire Count Mitterhouse (Robert Tayman) and his human lover (Adrienne Corri) is forced to run the gauntlet. The Count pronounces a curse on the children of the villagers with his dying breath. 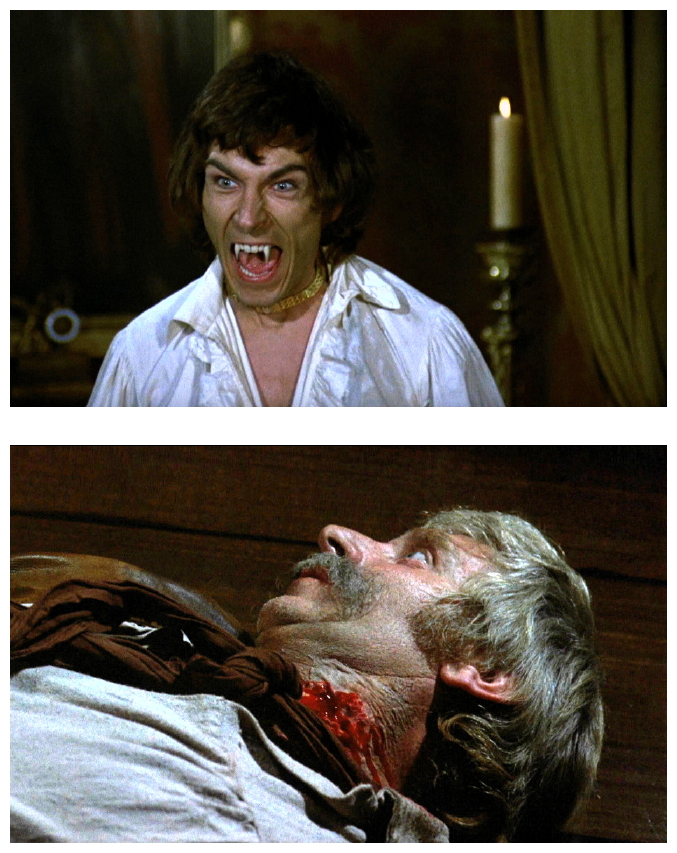 Fifteen years later, plague has struck the village, armed guards outside prevent people from leaving, and the Circus Of The Night (“…And One Hundred Delights!”) comes to town. People soon start turning up dead with the blood drained from their bodies and, when the vampires drink blood, it helps revive the Count whom Corri, the owner of the circus, keeps hidden away. The story gets a little confusing at times but it seems the vampires are after Corri’s innocent daughter Dora (Lynne Frederick), and her boyfriend Anton (John Moulder-Brown) keeps getting in the way. The circus acts perform genuine magic: a panther becomes a man; two flying bats wheeling through the air turn into two beautiful young people; a caged tiger shudders with delight to the cat woman’s erotic dance. 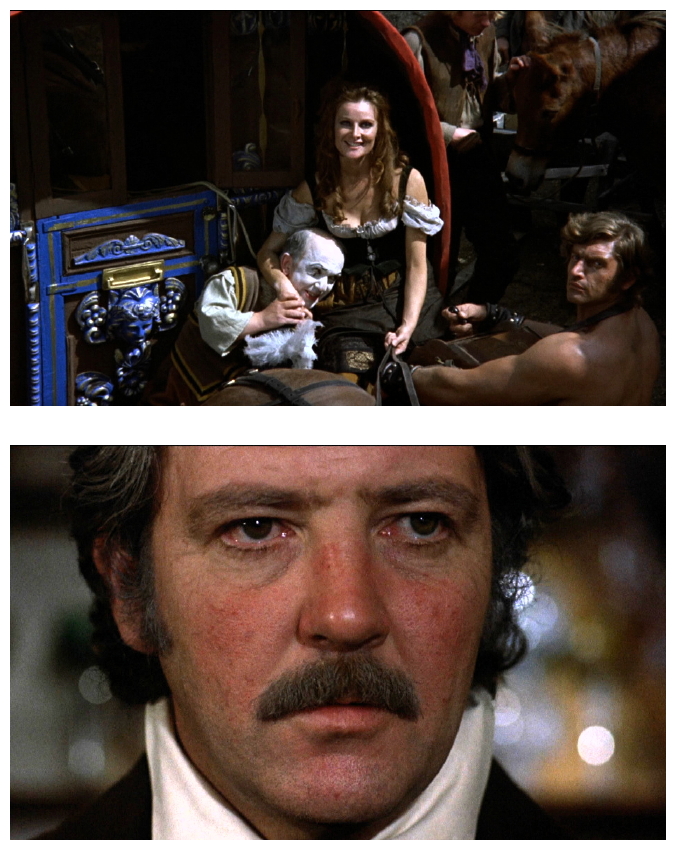 The villagers think all this is a clever fake but we, the audience, know better – in a clever about-turn, we accept the fantasy that they reject. The editing provides more magic. A vampire kills a victim, who gasps as he dies, and the gasp becomes the gasp of pleasure as the pretend-vampires (who are really real vampires) float above the circus audience. Clever stuff indeed. The hall of mirrors with one mirror that is a magic door to the castle crypt half a mile away is good too. Direction by Robert Young has artistic flourishes and he’s able to give his few non-bloody scenes a genuinely sensual quality. He makes great use of religious symbolism and visuals that make us question whether we’re witnessing reality or have entered a dream state. 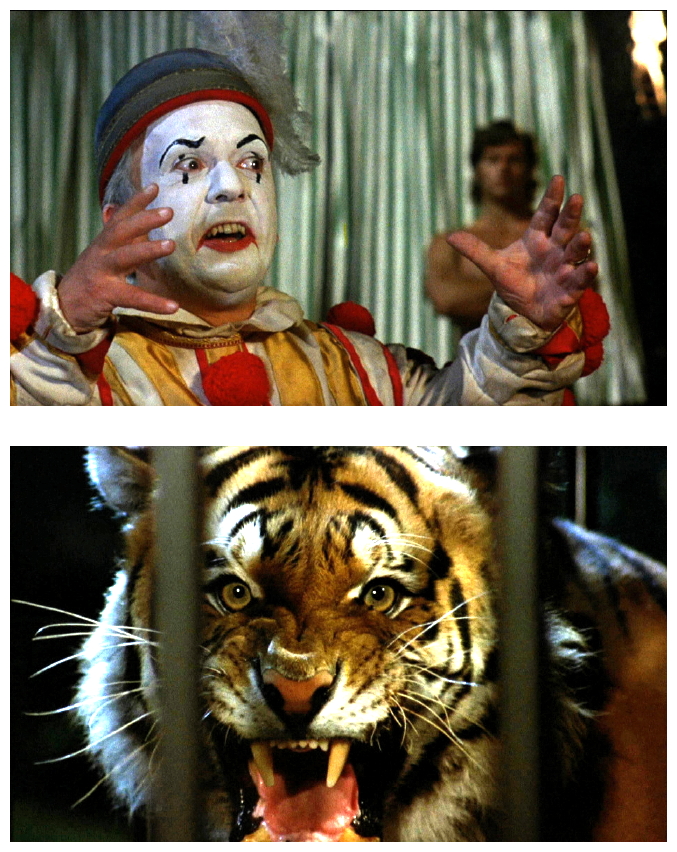 The cast – a normally reliable ensemble including Thorley Walters, Anthony Carlan and Richard Owens – offer up some terribly ordinary performances. That being said, it’s always interesting to see David Prowse (aka Darth Vader) even though he’s not given any dialogue, and three of the cast – Laurence Payne, Adrienne Corri, Lalla Ward – would enjoy a reunion in the 1980 Doctor Who story The Leisure Hive. The film also introduces Lynne Frederick, who would later marry comedian Peter Sellers, and Robin Sachs would later appear as the villainous Ethan Rayne in the Buffy The Vampire Slayer television series, and as Space Conqueror Sarris in Galaxy Quest (1999). This enjoyably gory (for its time) masque about appearance and reality gives all the vitality and enchantment to the vampires, and all the plodding idiocy to the villagers, symbolising us. The villagers’ final victory, we feel, is the triumph of philistines over the artist, of cuckolds over seducers. In this, as in other Hammer films, the vampire’s reign is specifically related to unfaithful wives and fornicating daughters, both of whom regularly expire in bliss. 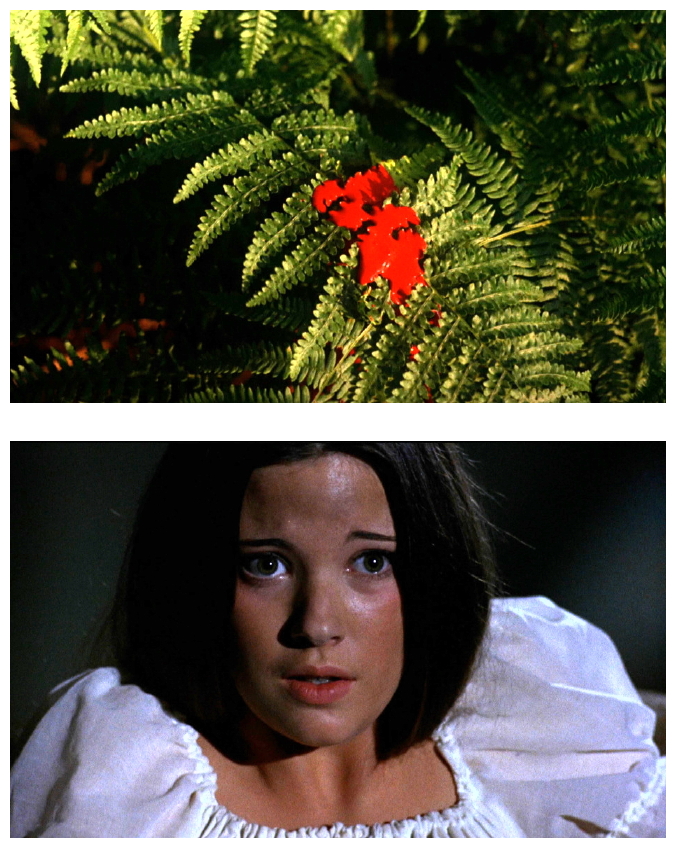 The film combines lurid sex and extreme violence on the part of both the vampires and the villagers. The body-count is high, in fact this is one of the first films since Frankenstein (1931) that has monsters killing children, except here it’s actually done on-screen. Hammer’s films were generally becoming worse, but their final cinema production of the seventies had a certain sordid interest, To The Devil A Daughter (1976), but that’s another story for another time. Right now I’ll ask you to please join me next week when I have another opportunity to make your stomach turn and your flesh crawl with another lusting, slashing, ripping flesh-hungry, blood-mad massacre from the back side of…Horror News! Toodles! 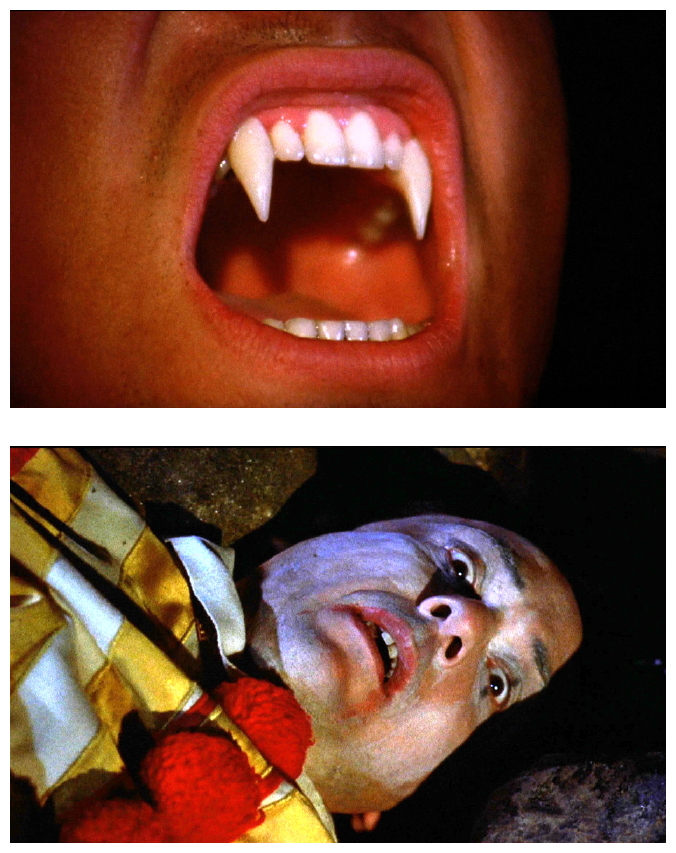