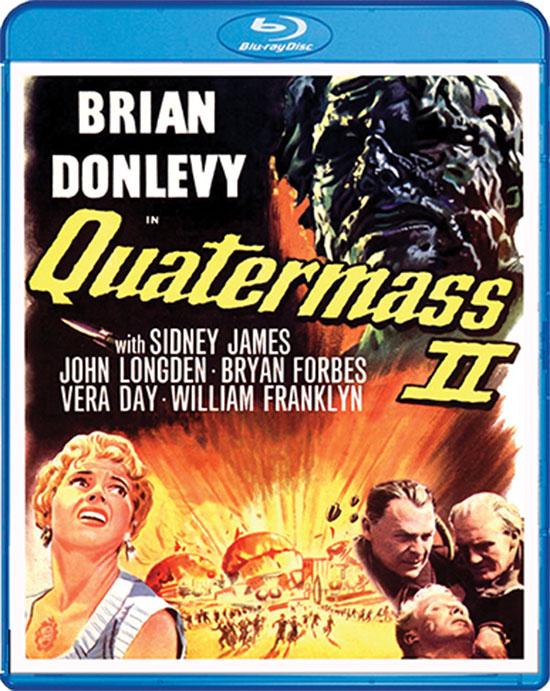 “Professor Quatermass, trying to gather support for Moon colonization, is intrigued by the mysterious traces that have been showing up on his radar – meteorites crashing down. Following them to the place where they should be landing he finds a destroyed village, a mysterious factory too close to his designs for the Moon colony for comfort, and some strange aerodynamic objects containing a mysterious, ammonia-based gas that infects one of his assistants. Officially, the factory is producing synthetic food but, despite the veil of secrecy surrounding it, Quatermass succeeds in finding out it harbours aliens with deadly designs on the Earth. The second in Hammer’s trio of screen versions for Nigel Kneale’s classic fifties BBC serials, with the same director and star as The Quatermass Xperiment.”

The Quatermass Xperiment (1955) proved to be so successful in the United Kingdom on a level that was totally unexpected by Hammer executives. It was also a minor success in the United States too, where it was released under the title The Creeping Unknown (1955). This prompted the studio to put other science fiction horror films into production. One of the first of these was X: The Unknown (1956) and, though it had many similarities with The Quatermass Xperiment, there were two important differences. Firstly, it wasn’t made by the same Hammer team, but was instead directed by Leslie Norman from an original script by Jimmy Sangster. Secondly, the monster in X: The Unknown was very depersonalised and therefore had none of the emotional impact of the doomed but dangerous astronaut in the first film. The same year Hammer also made a sequel to The Quatermass Xperiment entitled Quatermass II aka Enemy From Space (1956) based on the BBC television serial of the same name transmitted in 1955. It should also be noted that this was one of the earliest examples of using Roman Numerals in the titles of movie sequels. 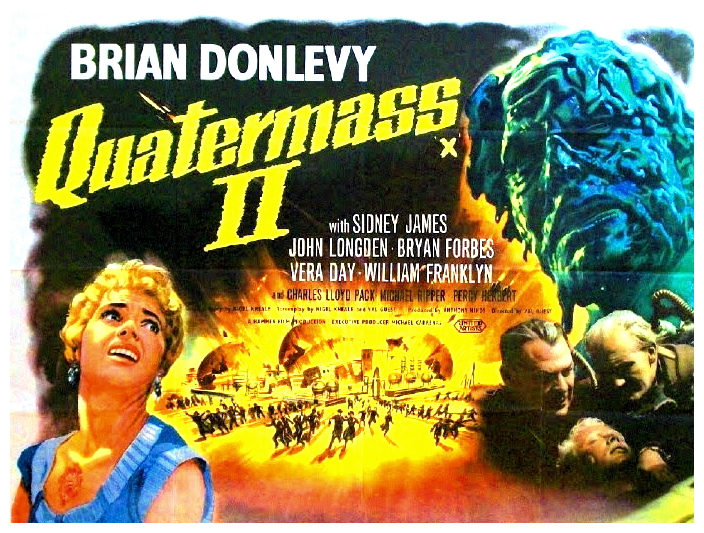 Brian Donlevy again played Professor Bernard Quatermass, who this time becomes involved with an alien invasion on a much larger scale. Now in charge of the British space project, he is trying to persuade the government to finance the development of a life-support bio-dome that would enable mankind to live on the moon. The government pleads lack of funds, so a disgruntled Quatermass returns to his rocket installation where he is informed by his assistant Marsh (Bryan Forbes) that a number of mysterious small objects have been picked up on their radar. These appear to be falling in the direction of a nearby town called Wynerton Flats. While checking the area the next day, they find several small projectile-like objects and, to Quatermass’s great amazement, they also discover an establishment that looks exactly like his own proposed bio-dome! Soon after, the projectile held by Marsh explodes, leaving a strange scar on his face. At that moment, masked soldiers emerge from the bio-dome, surround the scientists and take away Marsh. 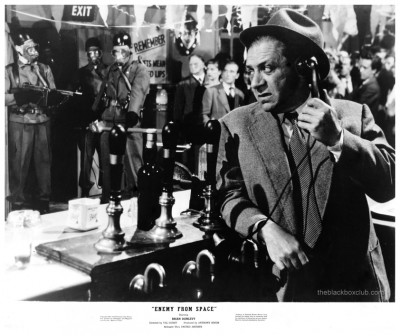 Furious, Quatermass goes to London to find out who is in charge of the bio-dome but, though he learns that it is a bona fide government project, it has been classified Top Secret and no-one will talk about it. He encounters a Member of Parliament named Broadhead (Tom Chatto) who is also trying to find out what is going on at Wynerton Flats. Broadhead and Quatermass join an officially organised tour of the establishment, where they are told by their coldly aloof tour-guide that it’s actually a plant for manufacturing artificial food for the Third World. Unsatisfied by this reason, Broadhead goes off alone to discover what the mysterious domes really contain – and reappears covered in a smoldering black substance. Screaming in agony, he warns Quatermass not to touch him, then dies horribly. 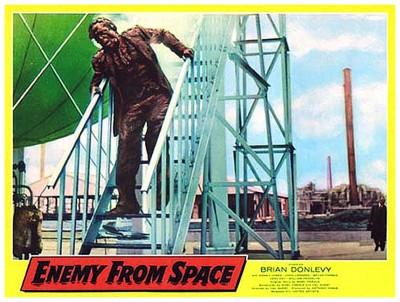 Quatermass escapes and returns to London but his efforts to raise the alarm are in vain. He notices that all the government officials he meets have the same V-shaped scar on their skin and he realises that the British government has been completely infiltrated by ‘something’. Finally, with the help of a trustworthy police inspector and a crowd of workers who live near the bio-dome, Quatermass forces himself back inside, after first ordering his rocket installation to fire a missile at a mysterious object they’ve detected in orbit around the Earth. There is a fierce battle within the mysterious establishment between the guards and the workers, during which Quatermass manages to cut off the supply of the black substance to the bio-domes, resulting in the giant blob-like aliens breaking out. The substance, it seems, was food for the huge creatures dwelling within the domes, and the establishment itself was the spearhead for a full-blown invasion of Earth. But, as the the gigantic monsters converge on Quatermass and his men, the missile hits the orbiting alien spacecraft above, and all the aliens die instantly. Once again Quatermass has saved the world. 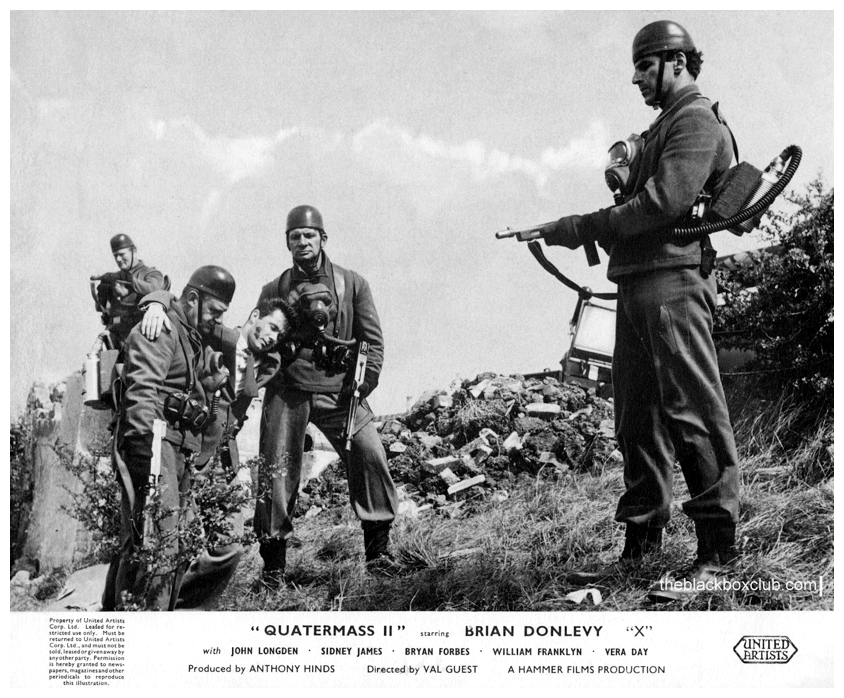 As with The Quatermass Xperiment and the later Quatermass And The Pit (1968), Nigel Kneale cunningly mixes science fiction with traditional horror elements. The alien invasion may be a science fiction idea but it’s presented with the trappings of Gothic horror, such as the V-shaped ‘mark of the devil’ which all the alien-possessed people display. The film, like its American genre movie contemporaries, is also an interesting symptom of the state of paranoia that existed in the West during the fifties, but the paranoia in Quatermass II is of a peculiarly British kind, and reflects fears of government bureaucracy becoming all-powerful. This fear has long been a major one in Britain – a physically small country with a strong centralised government – and regularly emerges as a topic in films, television and literature, from George Orwell‘s Nineteen Eighty-Four to Judge Dredd comics. Whereas, in America, with its various States still retaining some autonomy within the federal system, the same fear is less intense.

Nigel Kneale actually repudiated the film, despising Donlevy’s portrayal of Quatermass, as well as Val Guest‘s rewrite, so much so that when the rights reverted back to Kneale in 1965, he immediately withdrew the film from circulation. I had the opportunity to get Mr. Guest’s side of the story when we met on the set of the 1976 television show Space 1999: “Whether Nigel gave us a draft script, I honestly can’t remember. I think it was probably the former, seeing as he has a script credit on the film with me, but I certainly didn’t work with him on the script. Quatermass II was a little more expensive than the first one, mainly because we went on location. On The Quatermass Xperiment, the furthest we went on location was Whipsnade Zoo. We did everything else on the lot at Bray, though we did a couple of night shots in Windsor, for the scenes of the old chemist shop and things like that. Otherwise it was all contained in the studio. But on Quatermass II we went down and filmed the Shell refinery on the coast, and it was a major operation for a small company like us to take a whole unit down there.” 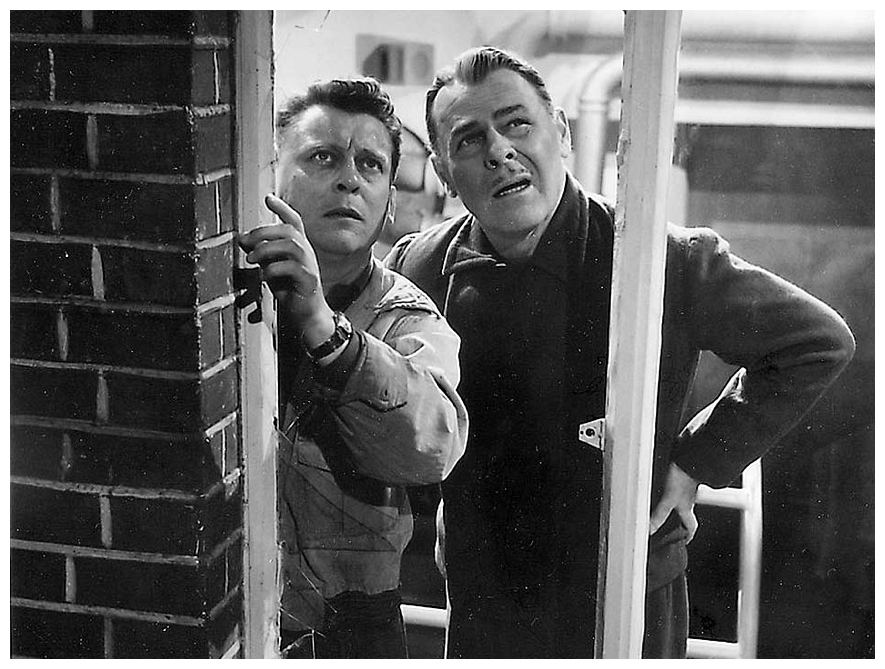 “We also had a bigger cast including people like Bryan Forbes. I used to employ Bryan all the time in those days. Whenever I had a picture I would try and give him a part, even if I had to write him in especially, to help him pay the rent. I had a small stock company that I used from picture to picture. One of them was Sidney James, and another was John Van Eyssen, who later became head of Columbia Pictures in England. I can’t remember if Brian Donlevy was actually part of the Lippert distribution deal, but Margia Dean was, because I think she was Lippert’s girlfriend. But Donlevy was in it just because it was thought he would be a good star to hang the picture on. It was obviously important to have an American star from the American release point-of-view and, of course, he was well-known. He was a great guy and great to work with. He used to like his drink, however, so by after lunch he would come to me and say, ‘Give me a breakdown of the story so far. Where have I been just before this scene?’ We used to feed him black coffee all morning but then we discovered he was lacing it. But he was a very professional actor and very easy to work with.” 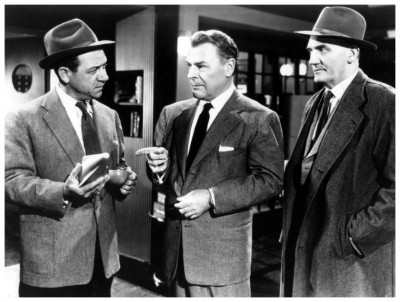 The following year Guest directed another film based on Kneale’s work. Called The Abominable Snowman (1957), it was adapted from Kneale’s BBC television play The Creature, which was originally transmitted in 1956 and concerned the hunt by a group of men for the legendary Yeti of Tibet. With that, Hammer gave up science fiction films – contemporary ones at least – having decided that it was the monsters and not the science fiction elements that attracted audiences. So they went back to basics with the prototype of all modern science fiction – Frankenstein – in all its Gothic period splendour and, most importantly, in glorious gory colour. It proved to be a tremendous success and launched the dynasty of Hammer’s now-famous Gothic horror films, but that’s another story for another time. Right now I’d like to profusely thank the British TV Times (24th July 1975) for assisting my research for this article, and graciously invite you to please join me again next week when I have the opportunity to raise the hackles on your goose-bumps with more ambient atmosphere so thick you could cut it with a chainsaw, in yet another pants-filling fright-night for…Horror News. Toodles!

Quatermass II (1957) is now available on bluray per Shout Factory 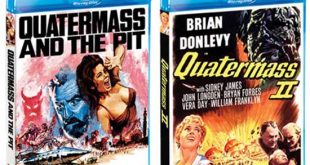