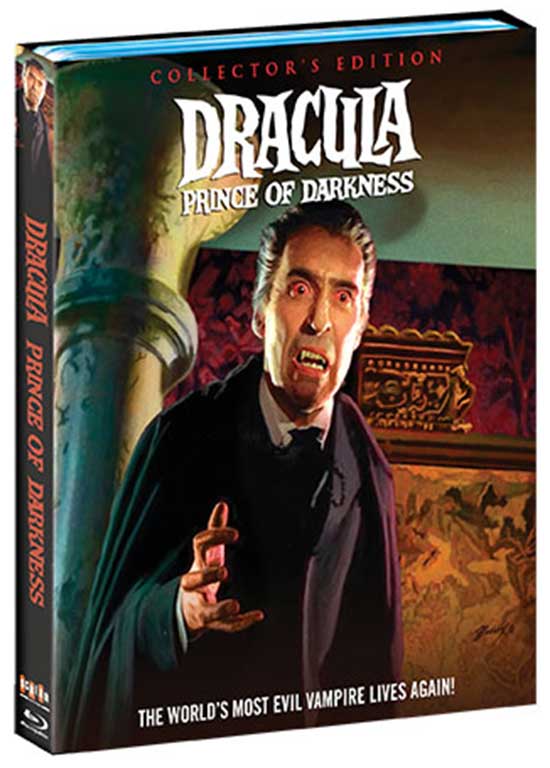 Dracula is resurrected, preying on four unsuspecting visitors to his castle.

Minimalism has always been an intriguing angle for filming to me. It doesn’t always work, but is something of an ambitious leap in the attempting by the directing artist. It usually comes by way of two happenstances: either by creative design or financial necessity. There’s the auteur who has $200 million handed to him to play with because he or she has a history of giving a studio summer box office bonanzas and has the credibility in the bank to play with a one-off idea they’ve been germinating about since high school.

That four person rumination on life, death, the hereafter, coming out of that three day bender to face the work week etc. The play they wrote that premiered at an Arctic research post in 1998. Then there is the person handed $10,000 because their script landed in the laps of the smallest startup of a studio or a severely fiscally-minded exec at a biggie in Hollywood decided the mantra “do more with less” was really sound. It was more of the latter that befell veteran horror helmer Terence Fisher when he was asked by Britain’s version of the cinema House of Horrors, Hammer Films, to take on the 1966 project Dracula Prince of Darkness.

A vacationing foursome traveling through Europe deigns to travel to the German village of Karlsbad despite warnings from the locals. Left stranded at a road crossing outside village limits by a frightened coachman, the group are met by another mysterious horse carriage that appears to have no driver. Boarding, they are taken to a remote castle. The four soon find that the owner of the abode is Count Dracula. What they don’t realize is that one of their number will be sacrificed as the catalyst for his resurrection, beginning a new reign of terror for the king of all vampires. 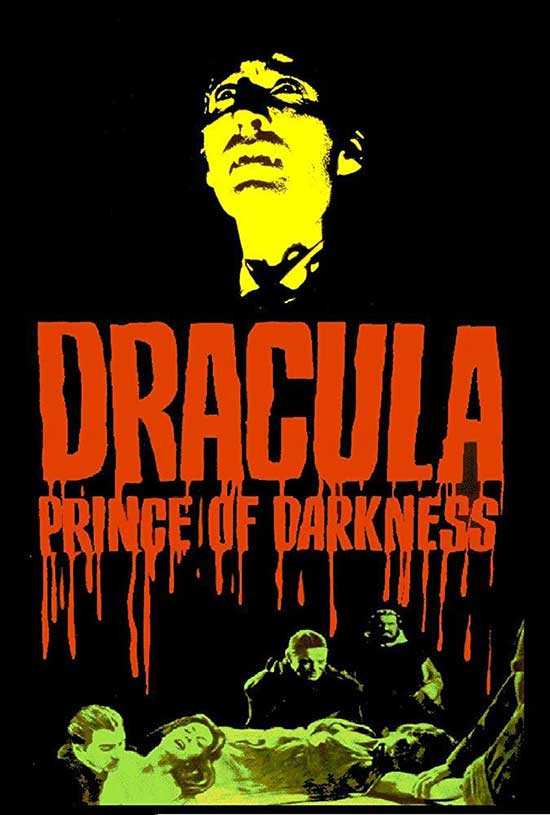 In late 1964, Hammer had the bright idea to keep production costs down by creating their own pair of double bills, a quartet of films where one set can be revamped and utilized again for each project and filming can be done on a back-to-back-to-back-to-back schedule. Actors and crew could similarly be re-used (four of the principals of POD would go on to star in Rasputin). Follow so far?

Iconic set designer Bernard Robinson was brought back to the fold to oversee the technical side of this mammoth undertaking, which involved the pictures The Reptile, Rasputin the Mad Monk, Plague of the Zombies and this one. According to clapper boy Christopher Neame, in Howard Maxford’s book Hammer Complete: the Films, the Personnel, the Company, very little time was afforded relax and catch one’s breath. “One finished on the Friday evening at exactly five-twenty and the other started at eight-thirty on Monday morning….the art department only had one weekend to convert Transylvanian interiors into Russian (Rasputin followed the Dracula piece on the schedule). This was were Bernie came into his own.”

Fisher was handed an estimated 100,000 pounds for a budget. Not bare bones, honestly, but certainly a modest amount even by standards of the day. Still Fisher, Robinson and the rest of the Hammer gang were old hats at both this type of gothic milieu as well as working efficiently with schedule and materials on hand. The final result is a neatly-compiled chiller that belies the money constraints in achieving color and opulence. Few but the keenest of eyes among fans would see that the winter palace in Rasputin distinctly resembles the exterior of Dracula’s castle. Robinson even stretched things enough to be able to offer new bits such as a Baronial hall addition to the Count’s home. 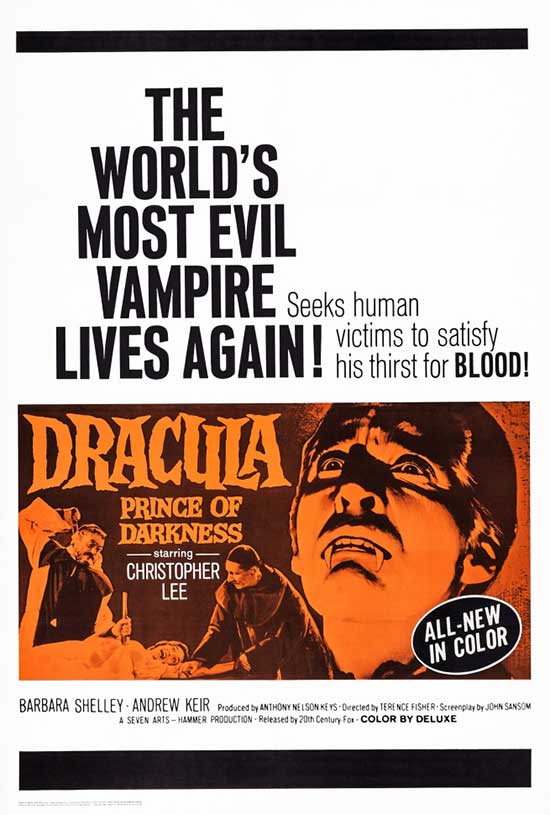 The film is aided by Fisher’s skill at editing with a tight pace (clocking in at a fairly brisk 90 minute running time) and his ability to effectively stage block the action set-piece. A prime example is the vampire’s intro (in full hissing rage), racing from the top of the stairs in the castle foyer to cast aside the now-vampirized Helen as she closes in on the heroine Diana, that is more about movement and positioning of characters than static dialogue. Culminating in a first confrontation between hero Charles and the ruler of the damned, it is all rather breathless and sets a frenetic energy for the remainder of the story.

The script, itself, is an intriguing exercise in its own sparsity of wording. As written by Jimmy Sangster, the Count is given no dialogue to utter. Both Sangster and star Christopher Lee offer differing reasons as to why this happened. Per author Lawrence French in his article “Supernal Dreams: Christopher Lee on “Horror of Dracula” & “Curse of Frankenstein” for the October 16, 2008 issue of Cinefantastique, Lee claimed that rather risible verbiage was, indeed, written that the actor refused to utter. “”I didn’t speak in that picture. The reason was very simple. I read the script and saw the dialogue! I said to Hammer, if you think I’m going to say any of these lines, you’re very much mistaken.” Sangster, in his memoir Inside Hammer, offers a different take. “Vampires don’t chat. So I didn’t write him any dialogue. Christopher Lee has claimed that he refused to speak the lines he was given … So you can take your pick as to why Christopher Lee didn’t have any dialogue in the picture. Or you can take my word for it. I didn’t write any.”.

What Sangster does insert throughout is a brilliant subtext of repressed sexuality (seen through Barbara Shelley’s entirely frigid Helen having her desires unleashed via the bloodsucker’s bite) and imbuing each scene with an almost tangible presence of malignance in the air. Dracula’s shadow is everywhere, even in the neighboring Karlsbad.There are the occasional flaws in his script (the hero Charles Kent is written in two-dimensional cardboard stock. Actor Francis Matthews had lamented in interviews years later that he was stymied by Hammer when he tried to introduce more of an emotional outburst during the moment he declares he would destroy Dracula) but Sangster didn’t aim this blood and boobs chiller for the voting audience of awards season. His target site was squarely set on casual folks, young and old, who crave the escapism into this world of horrific make believe.

Lee heads a stellar cast of vets plummed from the studio stock roster in handling the gruesome nonsense. Using only a singular feral hiss and an array of steel-eyed looks coupled with deliberate hand and body movements, his Count is the ultimate silent predator hovering in the shadowy corner. Andrew Keir makes for a robust and unconventionally down-to-earth monk in Father Shandor, who joins Kent in the hunt for the vampire. Suzan Farmer, who (like Matthews) isn’t given much to work with in the predictably virtuous heroine Diana, capably exudes a charm and sweetness that seems to resonate throughout. Thorley Walters lends his skill for bringing fun eccentricity to lovable life as the resident Renfield type, Ludwig, who falls under the spell of the count and helps set into motion the kidnapping of Diana.Though Matthews is left to serve two notes, disbelief and resolute stoicism, he rises above with ample charisma. Barbara Shelley runs away with acting honors, however, as frozen repression morphing into sexual tigress in Helen. Even the slightest hint of lesbianism is in the air during her intro scene as newly-minted vamp, closing in on the terrified Diana.

Composer James Bernard brings his clashing harmonies and heavy use of percussion instruments (such as timpanies and snares) with him once again in creating the score for the piece. There are few music artists who exhibit frenzy and frenetic pace to the level that Bernard does. Full-blooded doesn’t begin to describe his impact. Acclaimed cinematographer Michael Reed lends his immense talent and keen camera eye for the visuals in the picture. His use of twelve lockdown shots in overlapping dissolve is rather the treat during Dracula’s resurrection sequence and a filmic highlight.

If you are an instructor for the Film Appreciation 101 class at the local college and you are taking on the subject this week of how limited financial resources can yet lend to the release of creative restraint, Dracula Prince of Darkness would be a prime example to show your students. Having the right talents with just the correct skill set and imagination to go with it can allow you to achieve the near impossible, beauty on a budget.

Dracula: Prince of Darkness is now available on bluray per Shout Factory