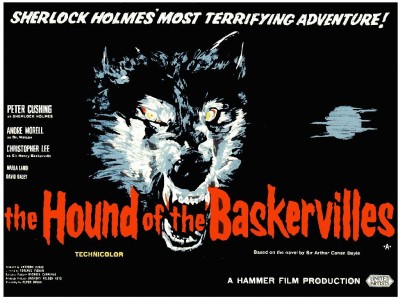 SYNOPSIS:
“When Sir Charles Baskerville dies unexpectedly, his nephew and heir Sir Henry returns from South Africa. Dr. Mortimer, the local doctor, is concerned about Sir Henry’s safety as he is convinced that Sir Charles was literally frightened to death. He consults Sherlock Holmes and recounts the tale of one Sir Hugo Baskerville who, several generations previously, had been killed by a huge hound and which now is believed by some to be a curse on the family. Holmes agrees to take on the case and it almost immediately becomes apparent that Sir Henry’s life is in danger. Holmes doesn’t believe in the legend of the Baskervilles or the supposed curse place upon them and sets out to find a more practical solution.” (courtesy IMDB)

REVIEW:
With The Curse Of Frankenstein (1957) and Horror Of Dracula (1958), Hammer Studios seemed to have found the formula to success and they began to remake other classic chillers including The Mummy (1959), The Curse Of The Werewolf (1961), The Phantom Of The Opera (1962) and others. They also dusted-off the old Arthur Conan Doyle novel The Hound Of The Baskervilles (1959) to give it the Hammer treatment as well. Hammer’s production of The Hound Of The Baskervilles was a full-colour version which concentrated on the grislier aspects of Conan Doyle’s tale, in keeping with their previous horror successes.

Peter Bryan‘s screenplay uses the framework of the original story to stick in some new and generally worthwhile innovations. The great problem facing any writer with the task of transferring this particular story to the screen is that Sherlock Holmes is absent for at least half the book, reappearing as it were to tie-up the loose ends. This might be acceptable for a book, but not for a film whose selling power depends on the name above the credits. The actor playing Holmes would have to be well featured throughout the film to justify his billing. Peter Bryan manages quite skillfully to keep a fine balance between cinematic requirements and loyalty to the novel.

The film opens with a reconstruction of the legend of the Baskervilles, in which the rascally Sir Hugo (David Oxley) is pursuing a serving wench into the ruins of an abbey, and meets ‘the hound from Hell’ face-to-face. The scene fades to reveal that Doctor Mortimer (Frances De Wolff) has been recounting the legend to Sherlock Holmes (Peter Cushing) and Doctor Watson (André Morell) in their Baker Street sitting room. For aficionados of Holmes, this room is a real treat, a near-perfect reconstruction of the room as recorded in Conan Doyle’s stories, right down to the small but important details of the Persian slipper filled with tobacco and a collection of bills transfixed to the mantelpiece with a knife.

The heir of the Baskerville title, Sir Henry (Christopher Lee), is newly arrived from South Africa to take charge of the Dartmoor estate, and Holmes visits his hotel to warn him of the possible dangers that await on the moor. While arranging for Watson to accompany the baronet down to Dartmoor, a tarantula slowly emerges from a boot that Sir Henry is holding. The following tense moments are in the true Hammer horror mould. As Holmes bids Baskerville to keep still, the spider slowly climbs up his arm to his neck where it pauses. Holmes then raises his cane and just in the nick of time knocks the spider to the floor and crushes it. This incident prompts the detective to utter this very Sherlockian warning: “The powers of evil take many forms. Remember that, Sir Henry, when you are at Baskerville Hall. Do as the legend tells and avoid the moor when the forces of darkness are exalted.” So Watson goes off with Sir Henry to Baskerville Hall. The film then follows the novel closely with Holmes making his surprise reappearance later on the moor. Surprise, that is, for Watson and for those viewers who are unfamiliar with the novel.

Once back in the mainstream of the action, Holmes carries out his investigations vigorously: “There is more evil around us here, than I have ever encountered before.” His trail leads him down a disused tin mine and out of the confines of the Conan Doyle plot. When asked by Stapleton (Ewen Solon) what he expects to find down there, Holmes replies cryptically, “Bones, perhaps.” While venturing alone through a mine tunnel, one of the old mining cars is set in motion by an unseen hand and smashes into the supporting timbers, bringing the roof down and apparently trapping the detective. After an unsuccessful attempt to dig through the rock blocking the tunnel, Watson and the others make their way back to the surface to find Holmes sitting there: “When the general applause has died down, I wonder if we could go back to the Hall. I’ve hurt my leg, I’m cold and I’m hungry.” He later tells Watson that he knew beforehand that the mine had a number of exits.

It is Holmes injured leg and not the mist that delays him in dealing with the hound, which turns on Stapleton killing him before being destroyed in turn by Holmes. Cecile (Marla Landi) runs out on to the moor to be engulfed by the great Grimpen Mire. Holmes shows the shaken baronet the dead hound: “There is nothing to fear now. They used this mask to make it look more terrifying. It was starved for weeks, kept down the mine till the time was ripe then given the scent.” Safely back in Baker Street, Watson asks Holmes at what point did he suspect the truth about the case. “When Sir Henry complained of a missing boot, that put me onto the scent, as it were.” – “As early as that? Incredible!” – “Elementary, my dear Watson, elementary.” 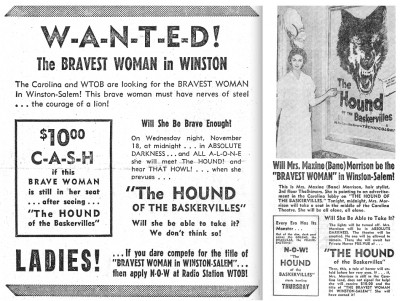 And so ends Hammer’s Hound. As with all Hammer productions, the sets and costumes are of the highest quality, although it’s a pity that there are no London exteriors (as in the 1939 version) to give a real sense of the period. However, the moors exteriors are highly effective, fitting Arthur Conan Doyle’s descriptions exactly. Surprisingly enough, the film was not shot in Dartmoor but just outside London near Frenchman Ponds. The biggest disappointment in the film is the appearance of the hound itself. Determined to inject as much horror into the story as possible, Hammer emphasised the horrific elements of the hound so that when it finally does appear, it’s an anti-climax. However, presenting the hound had been a problem and director Terence Fisher told me the dog was, ironically, one of the kindest and loveliest dogs around, and for a lot of the close-ups they had to use a vicious-looking hand-puppet and push that into the actor’s faces.

Sir Henry Baskerville is played by Christopher Lee, who must surely have been second on the casting short-list for the part of Holmes. In fact Chris did eventually play the great detective a few times, in Sherlock Holmes And The Deadly Necklace (1962), Sherlock Holmes And The Leading Lady (1991) and Incident At Victoria Falls (1992). André Morell’s performance as Watson is considered by many to be definitive. Played with great sincerity and without any of the petulant buffoonery of Nigel Bruce and his impersonators, Morell’s Watson is extremely faithful to the character that Conan Doyle’s writings conjure. 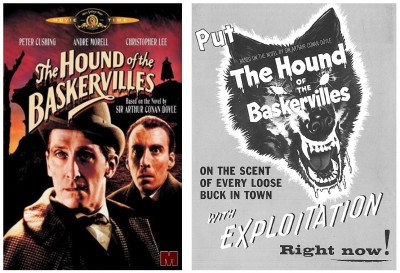 Surprisingly, The Hound Of The Baskervilles failed to grip the audience and was a disappointment at the box-office, causing Hammer to drop any plans for further Conan Doyle thrillers. Of course, the success or failure of any version of this Holmes story rests squarely on the shoulders of the actor who plays the famous detective. In this respect Hammer had a winner, for it was the great Peter Cushing who was accurately promoted as “The new and exciting Sherlock Holmes!” And it’s with that thought in mind I’ll ask you to please join me next week when I have the opportunity to give you another swift kick in the good-taste unit with more terror-filled excursions to the dark side of Hollywood for…Horror News! Toodles!