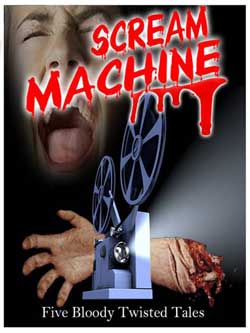 5 Twisted tales Designed to Devour your soul until you puke your Guts.

Anthologies are an area of movies that I like to watch yet never truly feel satisfied after consuming. There are great things to be found in anthologies. There are many great short films that can be seen through this type of filmmaking. On the other hand, there are also numerous bad short films that get put into the compilations that have you groaning, shaking your head, or bashing it against something to try and erase the memory of them from your brain. That makes watching them worthwhile but painful. The good and the bad sort of even out in my mind. I’ll never regret watching an anthology because of the good, but I’ll always be sad about the bad. 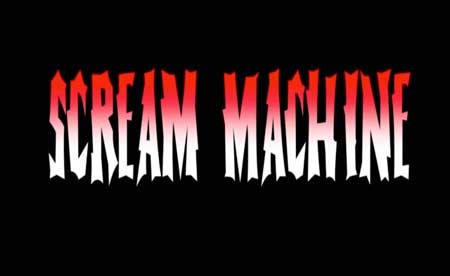 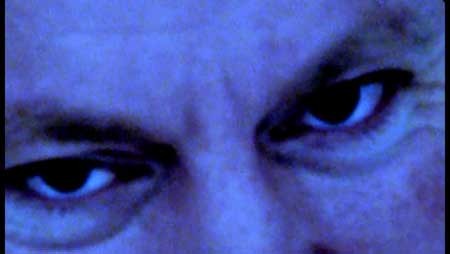 The reason I bring up anthologies is Scream Machine, an anthology that I can now say that I have seen. It comes from Scarlet Fry, the man behind a few other horror anthologies that include Death By VHS and Junkfood Horrorfest. I haven’t seen either of those previous films but have heard about them. The things I have heard have not been overly positive. Needless to say, after those assessments, I would have to agree with them regarding my feelings on Scream Machine. There’s not a lot of good to be found in the movie. Cheesy jokes, dull horror, poorly made. Yet there are still some good ideas that, if done differently, have the potential to be something great. They weren’t great, but the potential was there.

In order to properly give an idea of what you will be getting into if you are one of the poor souls who decide that watching Scream Machine might be a good idea, I’m going to go through each of the segments individually. That means there will be six sections that I write about. One for each of the five actual short films that make up the movie, and a sixth for the host portion that isn’t really much of a story. So let’s get to that then. 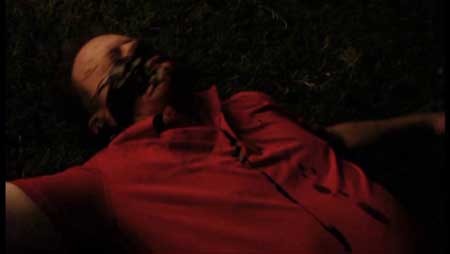 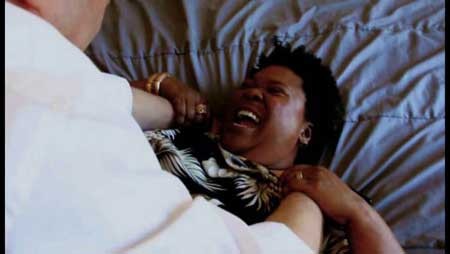 The first segment in Scream Machine is a segment titled Sledgehammer. The idea is fairly simple in this one, and could actually end up making a fairly good horror movie in a similar vein as I Know What You Did Last Summer. During a baseball practice, a pitcher throws a ball so hard that it kills the catcher. Two years later, someone goes after the pitcher for revenge. It’s a tight little story that plays out to the perfect length. The only problems with it are the amateur look and acting, and the building of tension. The amateur nature of it is easy to look past since the movie is low budget and not going for much more than simple scares. However, the poor tension building of this short takes away any of the oomph that the horrific elements could have possessed. What could have been a great short was killed by the editing and direction.

Following that, there was a segment called Cannibal Pen Pals: The Dahmer Obsession. This was, perhaps, one of the worst anthology segments that I have ever seen. A man writes to Jeffery Dahmer after Dahmer’s imprisonment and wants to be just like his pen pal. This obsession leads to murder and sexual deviancy. The story itself isn’t necessarily bad. Much like the first segment, the story had the potential to be something great. In fact, if it were fleshed out to feature length, it could be a great horror film on its own. The problem was in the acting, notably of the lead actor in the short. He was very unconvincing as the guy who would do all of the terrible things that he did. Especially in the scene in which the character does his sexual stuff. At no point did I believe his performance. In fact, he was so terrible that it was painful to watch the segment. It really did nothing for me. The premise was so squandered and the acting so atrocious that it was the bottom of the ranking for the segments.

Segment three. This one was titled April Fools Party. There’s not too much of a premise to it. A bunch of drug addicts are playing a prank on another drug addict. They pretend to be people threatening him at his home. And that’s about all that it is. Once again, it could have been something fairly great. However, they showed too much. They showed the people playing the prank as well as the guy reacting to it. Every time tension was built with the victim, it was immediately ruined by showing the pranksters. It doesn’t feel scary at all because of this. Had only the victim’s side been shown, real tension could have been built. It would have made the final payoff that much more satisfying than it was. What we’re left with is a mediocre short that could have been interesting. It seems like a trend. 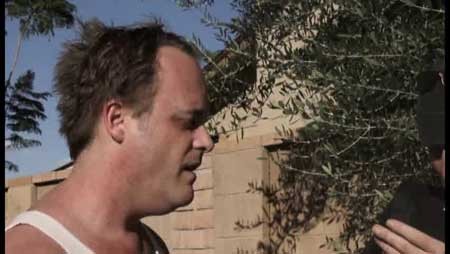 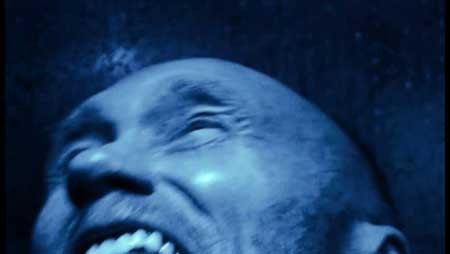 Onto the fourth segment, titled Septic Shock. The concept is pretty basic and this segment is the first one that seems to fully capitalize on its concept. Could it have been better? Sure. However, it was also well executed for the low-budget and amateur nature in which it was made. The idea behind the segment is that a cheating wife murders her husband by putting him in the septic tank to rot. Then he spends the short trying to survive in the septic tank. It’s the perfect kind of material for an anthology. The ten minute length helps to make it feel fully fleshed out without having it overstay its welcome. The lack of dialogue through most of it may have also helped it to avoid any poor delivery. All in all, solid segment, though still held back by the limitations of how the movie was made.

Finally, we come to Drive In, the final segment of Scream Machine. This segment is about a woman who hears voices through the radio of her car at the drive in, and imagines that the character on screen is talking to her. These voices urge her to kill her boyfriend. This segment doesn’t have much promise outside of the ten minutes that it lasts. It culminates in the most ridiculous scene of violence in the entire movie and gave me a last minute chuckle. The acting is alright in this segment. It’s the story that is lacking this time as it didn’t really build beyond the concept. There was nowhere for it to move. It isn’t a waste of a segment, but it’s nothing to write home about either.

The whole movie is wrapped up with a series of hosting bits where a man with a bird-like mask and a severed head make jokes. After the septic tank, one of them said “That stinks.” That’s the kind of humor we get in these moments. There isn’t much beyond the jokes and the introduction of each segment in the movie. These portions are fine for what they are, though they could have been much better.

Scream Machine as a whole could have been a much better movie. With a bigger budget, more professionalism, and a different direction to the segments, it could have been a great movie. I tend to feel torn up about anthologies normally because they have good and bad. This one is mostly bad but there was a lot of potential to be something much better. It makes me wish that there was a big budget remake of this movie that managed to take what was already there and improve on it. I have to give credit to the writing of the movie. The ideas themselves were fairly good the whole way through. It was the execution that didn’t quite work. Execution is everything when it comes to entertainment. Without good execution, you end up with a bad movie. This was a bad movie.