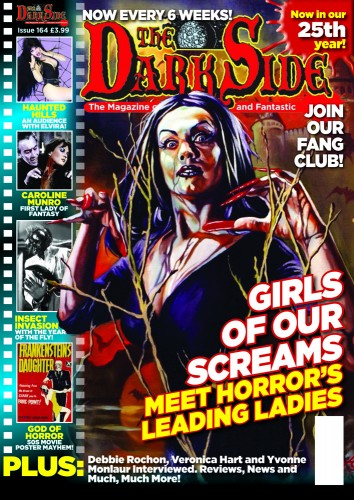 With this latest issue of The Dark Side comes the wonderful news that the magazine has seen its sales continuously rise to the point that they can now up their frequency to an issue every 6 weeks instead of every two months. That’s fantastic, and just goes to show that there is still an appetite for print media when it comes to the horror genre.

This new issue is certainly going to fly off the shelves, as it’s main focus is the Scream Queen phenomenon that has been such a big part of the horror genre for so long. It’s a damn fine collection of material as ever, but the interviews this time out are with names that will really get a lot of people picking a copy up. The first thing you hit in the issue is an interview with the always entertaining Cassandra Petersen, aka Elvira, Mistress of the Dark herself.

The letters pages come next, and it’s still such a pleasure to read the interaction between the magazine and its readers, as well as enjoying seeing real cult film knowledge put to the test with the ever more obscure questions and memories. There is a somewhat insane letter as well, which it’s lovely to see make it into print. This is followed by the second half of the massive feature on horror and genre movies which came out in 1958.

The most fun interview of the issue is with the awesome Debbie Rochon, who comes across every bit as entertaining as her film work. The final piece of the issue is one of the best, beginning a two-part interview with the truly legendary Caroline Munro, who is candid, funny and really humble in this first instalment. The Dark Side has hit the jackpot with this issue, and even just six weeks seems like too long to wait for more of this quality.