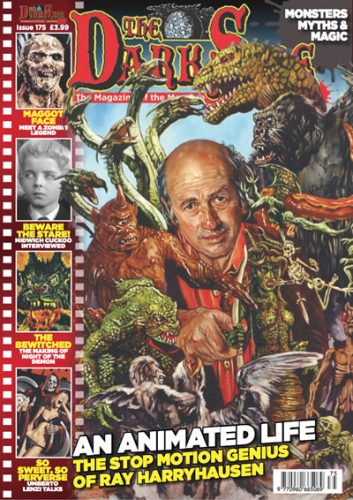 Now here’s an issue of The Dark Side that film fans are going to absolutely devour. The cover painting from Rick Melton heralds the arrival of a major article on stop motion animation genius Ray Harryhausen, which I’ll get to in a little while.

That feature alone is enough to get copies of this issue flying off the shelves, but there is a wealth of other content on offer which is just as compelling.

Let’s take a look at the whole magazine’s contents.

The news section is a pleasant start to the issue, although news sections in magazines do tend to feel a little redundant at the moment due to the proliferation of online content. That said, it’s still a good way to get you into the magazine’s delights.

Next up is a cool but slightly awkward interview with Cannibal Ferox legend Umberto Lenzi. It’s not awkward due to the writer, more Lenzi’s dismissal of films from his canon such as the aforementioned Cannibal Ferox and the zombie gem Nightmare City. Over and over he mentions Hitchcock’s influence and makes a couple of eyebrow-raising claims. It’s a fascinating piece, but Lenzi’s bluster seems a little misplaced at times.

After the popular letters section (itself a throwback to a bygone era), there’s a great interview with Martin Stephens, who appeared as a child actor in Village of the Damned and The Innocents.

Then comes the Ray Harryhausen piece, which is a genuinely joyous piece of film journalism from Richard Holliss. Stuffed with images of the most legendary models from Harryhausen’s iconic film work along with stories and anecdotes about the man himself, it’s a glorious article which I would have happily devoured double page count of, and that’s despite the piece already filling 9 pages!

The ‘Century of Horror’ column this time features The Phantom of Paris and The Mystery of Marie Roget and takes a wider look at the use of Paris in classic thrillers. Once the DVD reviews are over with for the issue, there’s then a strong piece on Night of the Demon.

An interview with Zombie Flesh Eaters ‘Maggot face’ actor Ottaviano Dell’Acqua is a fun ready, as is the interview with David McGillivray which follows it. The issue closes with artist Rick Melton’s eclectic column, rounding things off nicely once again.

The Dark Side continues to offer great value for money and a huge amount of entertainment value for the fans who continue to pick it up.