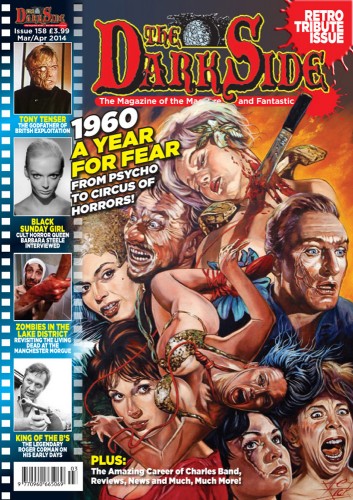 The central theme for this latest issue of the DARK SIDE is once again a chunky retro feature on scares of yesteryear, this time beginning a semi-regular look at a particular year in the annals of horror. This issue’s feature takes a look at 1960 and all that it brought the genre.

Before you get to that though there is a feature written by John Martin entitled Zombie Dales Diary, in which the writer takes a trip through the picturesque locations used in the classic The Living Dead At The Manchester Morgue (aka Let Sleeping Corpses Lie etc). While a brilliant idea, the piece could do with a bit of an editorial trim as there’s a fair bit which doesn’t add much to proceedings. Still good though!

This is followed by a piece on famed Tigon studios producer/writer Terry Tenson and his pre-Tigon career in cheapo exploitation films. Of huge interest is a great interview with the legendary Roger Corman, a feature which I would have been happy to have taken up the whole issue. There’s also the first half of a lengthy interview with Barbara Steele.

A feature on Empire/Full Moon legend Charles band is also in there, written by Dave Jay, author of the truly excellent EMPIRE OF THE B’S book. While it does retread some ground from the book, it’s a brilliant read and will hopefully drive some more people to pick up that brilliant tome. There’s also the regular bounty of strong DVD reviews and columns.

While still a great read and excellent value for money, I feel The Dark Side is running the risk of getting stuck in a bit of a rut with all of the 60s and 70s features. However, a rise in the magazine’s sales is definitely evident, very likely down to these retro features. Features on 80s and 90s retro fare are promised, and would make for a nice change, as while this current crop of retro material is very good indeed, it doesn’t appeal to every fan of old horror movies and culture.

If the 60s/70s features could be balanced out by maybe a regular 80s/90s VHS/horror culture column or something then there would be wider appeal. That said, The Dark Side remains essential reading for every real genre fan.