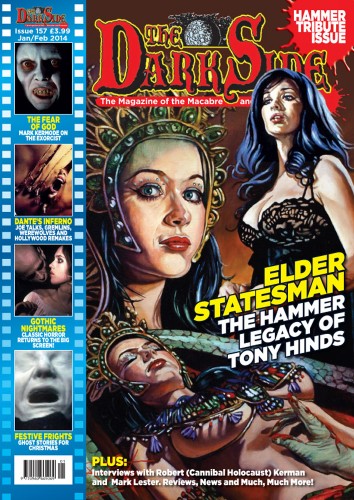 The recent spate of themed issues has certainly paid off for The Dark Side, with the magazine seeing a significant rise in circulation and interest across the UK and overseas. Thus it’s hard to begrudge them another Hammer themed issue, this time focussing on the work of writer Tony Hinds, also known under his pseudonym of John Elder.

That feature is once again an excellent piece of well-researched writing which is worth the cover price alone, but as ever the other material throughout the magazine is of the same high quality.

The piece which grabbed me the most this issue is the superb feature on The Exorcist, which take the shape of an interview with respected film critic and Exorcist obsessive Mark Kermode. For those of you in the US unaware of Mr. Kermode’s work, he’s the critic who helped to find all of the ‘lost’ footage from the film, including the ‘Spider Walk’ scene and the original ending amongst other material.

He also wrote a book about the film and was instrumental in the creation of the highly respected Exorcist documentary The Fear Of God. Basically he’s the foremost authority on the film outside of the people who originally made it, and as with his journalism and his several books, he is erudite and absolutely fascinating throughout the piece.

Then there’s a fun interview with Joe Dante, a feature on the BBC’s Christmas Ghost Stories, an interview with Class of 1984/Class of 1999 helmer Mark Lester, a look at the BFI’s Gothic season and a very interesting and beautifully open interview with Robert Kerman of Cannibal Holocaust/Cannibal Ferox/Eaten Alive, which also outlines his earlier work in adult movies.

The reviews section and other regulars are as strong as ever, but the damn things make me want to spend every penny I have on new releases, so my wallet isn’t much of a fan of this issue. However, the rest of me loves it. Another excellent issue in an increasingly long line of excellent issues.