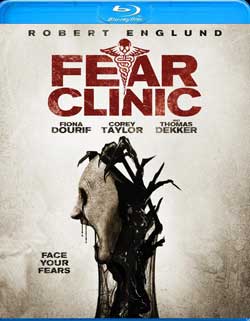 A doctor has invented a “fear chamber,” a device used to cure people of their crippling phobias.

Robert Englund is Dr. Andover, a scientist who, to be sure, goes against the grain. He operates the Fear Clinic, an experimental medical facility which houses his invention: the fear chamber. “Everyone is scared of something,” Englund says, and uses his invention to alleviate peoples’ deepest fears. He hooks them up to a face mask, slaps on some neural transmitters, shuts their bodies in a metallic cocoon, and induces hallucination. To conquer fear he uses “total immersion.”

. . . But something has gone wrong. A patient dies in therapy, and Dr. Andover, disturbed, tormented, shuts down the clinic . . . for one year.

A year later, Sara (Fiona Dourif–daughter of Brad) is one former patient among several who comes back, reporting “fear aftershock.” A masked gunman from her hallucinations–after a year–continues to haunt her. She’s not the only one seeing this phenomenon. According to Dr. Andover, “fear aftershocks” this late after treatment are not normal. Neither is the black sludge people are honking up.

These scared people need help. They need Andover. They need the fear chamber. And so, the Fear Clinic opens again for business.

Things take an unexpected turn this therapy session, though, as their fear develops into something they could barely fathom: a physical manifestation which, inside the clinic, terrorizes them for all they’re worth.
FEAR CLINIC, based on the Fearnet web series, lacks an engaging delivery of its plot. Rather than telling its story intrinsically, through the characters, it meanders all over the place, seldom focusing on one character long enough for us to cue in to their struggles.

At the end of the day, it’s a science fiction story, but it could use a whole lot more science. What is the nature of this fictional world? How? Why? No real answers are posed, making the movie muddled and unsatisfying. Things simply happen with, at best, only a small thread of reasoning–and not enough for the viewer to retain her interest.
And its pacing is slow and talky.

You’d think it’d be a lot more fun to watch Robert Englund as a mad scientist. But, mostly, he drinks and smokes, stares at his computer, crunches his numbers, wonders aloud why his experiments go wrong.

There are a couple good Englund scenes toward the end, though, as he faces his fears in states of hallucination. A patient dying in his care really messed with his mind. She’s back to haunt him. (Watching the third act of FEAR CLINIC, I remembered, Robert Englund was in GALAXY OF TERROR, and I thought, this is kind of like GALAXY OF TERROR, but in an experimental medical facility instead of space.)

In addition to Englund, the rest of the cast is competent. Fiona Dourif, Thomas Dekker, Slipknot’s Corey Taylor, are all stand-outs. But, you can only compromise a weak-kneed script so much.
To its favor, a lot of cool, grotesque stuff happens in FEAR CLINIC. I was delightfully repulsed by the body horror: there’s a terrific scene where one character is getting a nasty bubo on her back popped and a bunch of black sludge oozes out, followed by a surge of spiders. Overall, the FX are great: business as usual for Robert Kurtzman, whose resume reads like a top 50 horror movies of the last twenty years list. 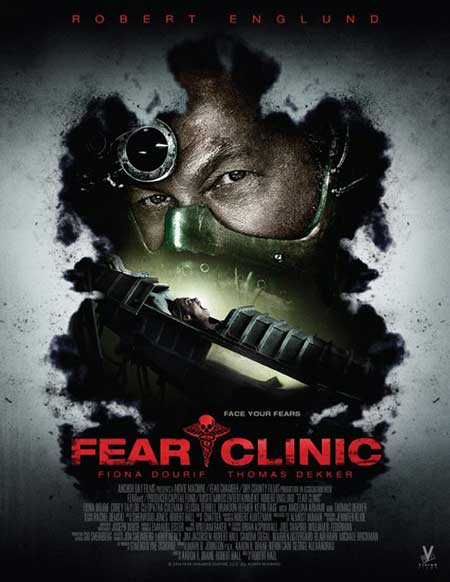 On that note, there’s a terrific, slithery black web of tentacles you really don’t want to #**# with.

It’s the FX and, to some extent, the performances, if anything, that make this high-concept film worth watching. Recommended to die hards only.