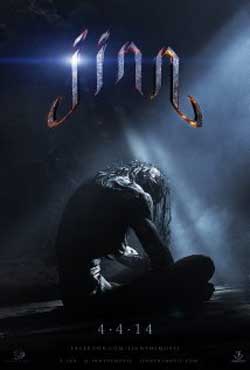 Shawn, an automotive designer, enjoys an idyllic life with his new wife Jasmine until it is interrupted by a cryptic message. The message warns of imminent danger and a curse that has afflicted his family for generations.

Effects overtake plot in this fantasy action film, Jinn from Ajmal Zaheer Ahmed that is more show reel than it is a fully formed product.

Shawn has it all; a well-paid job as an automobile designer, a loving partner played by Serinda Swann, and a fabulous, oversized apartment. Look upon his achievements mankind, and weep. However, when a mysterious videotape is delivered to him on his birthday, Shawn discovers he is part of a bloodline that is cursed to fight an eternal multifaith battle against the Jinn, a creature born of fire that totally has it in for Shawn’s family. When said Jinn kidnaps his spouse, Shawn joins forces with Father Westhoff (William Atherton) and the mysterious Gabriel, played by the best thing to happen to the Star Wars prequels, Ray Park. What we’re essentially looking at here is Buffy the Vampire Slayer with a load of religious mumbo jumbo thrown in to make it all sound super serious and mystical. 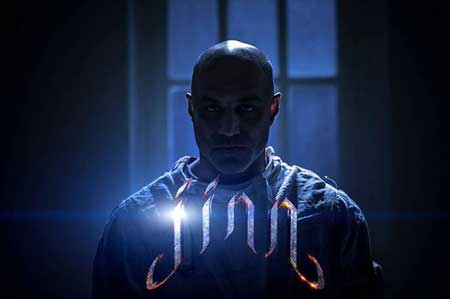 Whilst the effects, music and direction are competent enough, there’s so much that doesn’t work for Jinn, it becomes increasingly hard with each passing minute for the film to be one that you can confidently recommend without crossing your fingers behind your back.

For a start, Shawn (Dominic Rains) is an odd choice for a hero. He’s whiny, cowardly and when we first meet him, he’s walked out on his partner because she can’t give him a child. Well, that’ lovely. Through no fault of her own, your loved one can’t have children, and you respond by sticking your bottom lip out in your souped-up roller skate of a car. Well, aren’t you someone I can support from the touchline? And whilst he does improve, it’s all rather sudden. If the film isn’t interested in developing it’s lead realistically then why should we be?

Then there’s the decision made during writing that surely the audience can’t be expected to keep up with Jinn’s Machiavellian plotting, so they must be reminded constantly of what’s going on and why. Please understand, Jinn is not a film that will have you scratching your head trying to put all the pieces together. Well, not intentionally anyway.

The overall tone of the film feels like the pilot to an adaptation of a Young Adult’s novel. Hero finding out they’re super-duper special? Check. Meeting a group of mysterious allays who have been watching the hero for sometime? Check. An adversary that has never been overthrown before but will topple eventually merely by looking at it? Check. If Jinn was a novel, it’d have a black cover, with silvery lettering under a picture of a surly protagonist.

To be fair to Jinn, like it’s exposition, its action comes in bountiful supply. Unfortunately, this action takes place through montages and quick cuts that give the impression of a trailer, or in the case of one fight, take place entirely off-screen. I’m sure it wasn’t the idea to have Father Westhoff’s part in the climatic battle betwixt demon and human be so anticlimactic.

And yet, it’s very hard to take the scene seriously when he gives a rousing speech to an unseen foe before raising his sword and running off screen, never to be seen again till the closing scene. How did he escape? Who was he fighting? Just two of the many questions Jinn chooses not to answer. Perhaps, the revelations are being saved for the sequel that’s threatened during the credits.

If I could, I would say that Jinn at least had some potential. Instead, I’ll just offer up a truer diagnosis that there was no potential to begin with, as it relies fully on ideas and situations that it has cherry-picked from numerous other films of the same ilk. Slick, glossy and ultimately hollow, I am sure there is an audience out there for Jinn, but I’ll be damned if I know what it is.