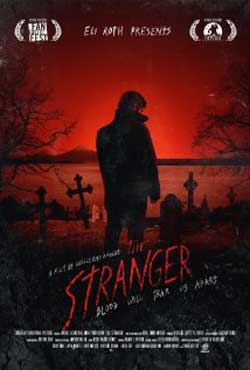 A strange man arrives in a small town looking for his wife only to be assaulted and left for dead by a group of local punks. A teenager comes to his aid only to discover that the man isn’t quite what he seems.

Produced by the always awesome Eli Roth, The Stranger is a pretty damn good movie. I had never even heard of it before I saw it so I went into it not knowing exactly what to expect. Since I didn’t even know what it was about I did a little research online before I watched it to find out more about it and saw mostly negative reviews for it more than anything else. With a sense of dread I sat down to watch it, totally expecting not to like it but then just the opposite happened and after everything was said and done I was pleasantly surprised by how good it actually was. 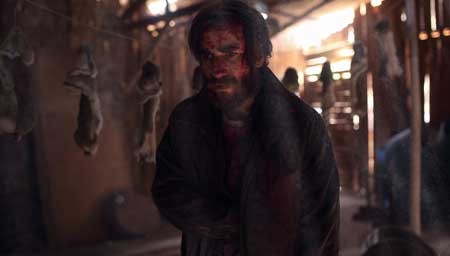 By no means was it the best movie I’ve ever seen or anything but it was nowhere near as bad as some of the online reviewers made it out to be. I’ll admit that it does have a few flaws (the dubbing is pretty bad and is a little distracting at times) but overall I thought that it was well-written, compelling, and just an entertaining movie in general. While I am a little hesitant to call it a horror film (it is more of a drama with some mild horror elements thrown in from time-to-time) I still enjoyed it and am glad that I was able to get my hands on a copy of it.

PLEASE NOTE: I found it very difficult to write this review without giving away some of the major plot points so be aware that several spoilers take place with the rest of this review.

One of the things that I liked about it is that it was able to put sort of a different spin on the vampire mythos (which isn’t an easy thing to do). I’m not particularly fond of vampires in general as I have just never thought of them as scary (or even that interesting for that matter) but writer/director Guillermo Amoedo tried something a little different with them in this film and it works. Martin (wonderfully portrayed by Cristobal Tapia Montt) is not your typical vampire. Yes, he’s a little moody and brooding but he doesn’t go out of his way to attack people and drink their blood.

He doesn’t really have superhuman strength, he isn’t really a badass by any stretch of the imagination as he gets his ass handed to him several times during the course of the film by normal humans, and he doesn’t have fangs or turn into a bat. He’s pretty much just like any other human except for the fact that he happens to have certain vampire qualities (such as not being able to be out in the sunlight). Some viewers (especially the ones that are vampire fanatics) probably won’t like Amoedo’s take on the classic creature but I thought that it worked (though I do wish that he would have fought back a little during the many ass beatings he receives as he does come off as a little too weak at times). Having his blood have a healing property to it was a nice touch and I thought that it was a pretty cool concept overall. 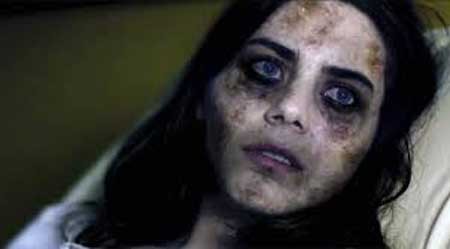 I also really dug the characters as well and thought that they were one of the film’s strong points. As I already mentioned Cristobal Tapia Montt does an outstanding job as Martin. He’s an odd, sort of depressing guy that is unlikable at times but I still found myself rooting for him. I also really liked Peter (Nicolas Duran), the teenager that takes care of Martin after he is brutally beaten and left for dead. Of course the poor guy gets more than he bargained for after coming to Martin’s aid and he goes through a great deal of bad things as the movie progresses as a result (the bit with him being burned by the corrupt cop and its aftermath was a little hard to watch). He is a strong character and just one of those that you automatically like from the moment that you first meet him. Without a doubt though, my favorite character was Caleb (Ariel Levy) who, along with his crooked cop father (Aaron Burns) make up the villains of the movie. Caleb is such an evil, over-the-top, asshole (as is his father who will do anything to protect him) that you just love to hate him. He is basically just a punk with a bad attitude that is always looking for trouble and Levy does an awesome job bringing him to life. I know that I wasn’t supposed to like him as he is the bad guy of the movie but I thought that he rocked and you could tell that Levy had a blast playing the part. I thought that The Stranger had a lot of great characters in it and off the top of my head I can’t think of a single one that I had a problem with. 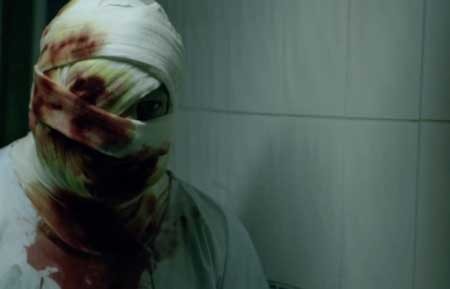 Even though I liked the film in general it wasn’t without a few problems. The main one for me was the horrible dubbing. The entire film is dubbed as it was shot in Chile and while it may not be as bad as the old Godzilla movies from back in the day it is still mighty bad and more than a little distracting. Some of the voices just don’t seem right for some of the characters and as much as I hate to say it it did take me out of the film just a bit as a result. I tried to ignore it the best that I could but sometimes it was pretty much impossible to do. I also thought that things moved a little too slow for me at times and that it should have had a quicker pace (then again I have the attention span of a gnat and usually get bored very quickly if something exciting and interesting isn’t happening). Don’t let these complaints keep you from seeing the movie though as it is actually very good but I felt the need to say something about these minor issues. 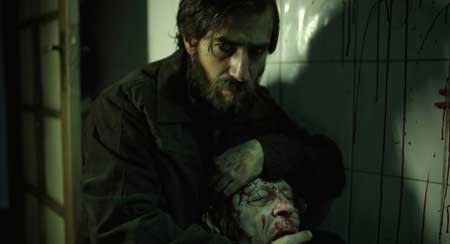 Overall I really enjoyed The Stranger. It is a different type of movie and it isn’t for everyone but I think that if you gave it a shot you just might like it. It isn’t nearly as bad as some of the negative reviews online claim it is and I think that it is actually one of IFC Midnight’s best releases in recent years. Check it out if you get the opportunity to do so, you just might end up digging it as much as I did.