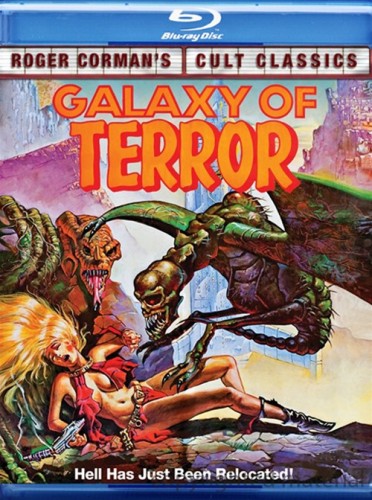 SciFi suspense thriller in which a rescue space ship crew meets up with horrors projected by their own imaginations.

As we all know by now, Roger Corman helped to launch the career of pretty much everyone in Hollywood. I couldn’t tell you how many films he has produced or how many of them I have actually seen but his output during the 70’s and early 80’s is what I have most enjoyed. Up until now, I had never seen one of the most notorious ones from that period, “Galaxy of Terror”. Yet again, another film I had always heard about and I had always loved the VHS cover art, just let it slip by. It is pretty obvious that it was a bit of a low rent “Alien” rip-off but there is still much to enjoy in this little sci-fi horror film.

The Planet Master sends a ship to the storm ravaged planet of Morganthus, for unknown reasons. The crew (which includes Grace Zabriskie, Edward Albert, Erin Moran, Zalman King, Robert Englund, Ray Walston, Sid Haig, and Taafe O’Connell) begins to investigate a downed ship and realizes the something has slaughtered the team it had carried. The crew then discovers a giant pyramid that they decide to investigate. What lies inside the pyramid prays off their fears and hunts them down, one by one. 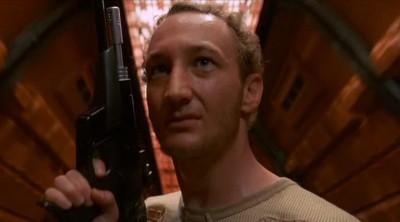 So yeah, plot wise, “Galaxy of Terror” is pretty much just “Alien”. It borrows HEAVILY from that story but for being shot with very little money, the look of the film is actually quite good. The production designer did a terrific job creating this other world. He would also go on to make one of the greatest sci-fi horror films ever made, “Aliens”. That’s right, Mr. James Cameron himself was the production designer, as well as second unit director. I think it is pretty clear that his talent had already begun to shine through in this film. Like much of the films’ cast, this was just a starting point for him. The same cannot be said about the films’ director B.D. Clark. Sadly, this was the last film he directed.

Most the effects work in the film. The giant worm looked cool as did the alien that pops up. The one thing that really annoyed me was the overly cartoony sound effects. It’s most noticeable during one of the end fights as well as the firing of the lasers. They just sounded like something you would hear on a Saturday morning cartoon. Now that I mention it, the laser blasts themselves actually looked pretty cartoony too. There is a bit of gore in the film and it is pretty awesome. I always love to see a good exploding head and “Galaxy” delivers us one of those. I guess I should also mention that the giant worm rape scene is every bit as bizarre as I had imagined it. 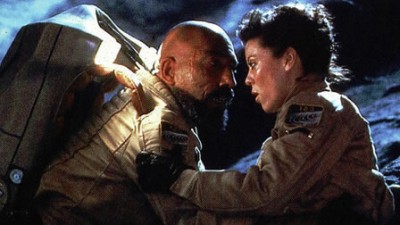 When you look at that cast list, how can you not enjoy the film? I thought everyone was pretty terrific. They all went a bit over the top, just enough to keep things interesting, never reaching that annoying point. It’s always fun to see Robert Englund in an early role, maybe the best performance in the film. He even has a pretty convincing fight with himself. The late Edward Albert (son of “Green Acres” Eddie Albert) did a fine job carrying the film as the calm and cool leader. Sadly, Sid Haig was a bit underused in my opinion but hey, I just like the guy. It was also nice to know that Ron Howard wasn’t the only “Happy Days” alum moonlighting in Corman films. Moran was believable as an empath and a shame her career never fully took off after “Happy Days”.

“Galaxy of Terror” is nothing more than an “Alien” rip-off but it’s still b-movie fun. With plenty of familiar faces on camera and talent behind the scenes, there is enough to elevate it to deserve its own place as a cult film. *** out of 5 stars and it is now available on Blu-Ray. 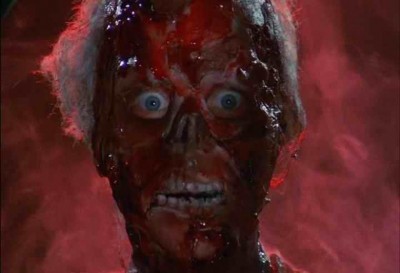