LIttle Dead Rotting Hood, a new movie from writer/producer Gabriel Campisi, is part of the big 12 picture distribution deal that Cinedigm signed with The Asylum. Gabe’s Traplight Media partner, Jared Cohn is set to direct this horror take of the children’s classic, Little Red Riding Hood. Who knows what is going to happen on the way to grandma’s house? I can only imagine what Red’s fate might be in the brilliant twisted hands of Gabriel and Jared. 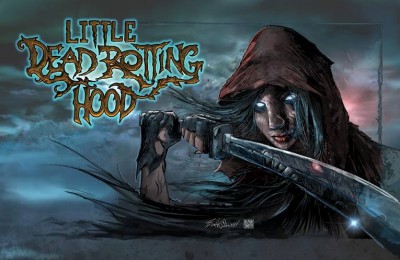 Gabriel and Jared have a successful history with The Asylum. Their movies include, Atlantic Rim, Jailbait, and Bound, which is their personal take on ’50 Shades of Grey’. You can also see The Horde coming soon from the Traplight duo.

I had a chance to talk with Gabriel Campisi about Little Dead Rotting Hood. He said, “The screenplay for Little Dead Rotting Hood was a lot of fun to write. I included a careful mix of horror, mystery and action, with just the right amount of humor for balance.” Gabriel is also the author of the successful book, “The Independent Guide to Writing a Business Plan for Investors”.

This deal brings us a minimum of 12 films in the next 3 years. In addition to Little Dead Rotting Hood, other titles in the deal will include, Troy: The Odyssey, Butch Cassidy and The Wild Bunch, and Fortune Cookie. If you are a fan of The Asylum’s smash hit Sharknado, these titles are sure to leave you with a Great White size smile on your movie lovin’ face.

The future looks bright for horror and science fiction fans, and we suggest you keep an eye out for more titles to be announced in the Cinedigm/The Asylum deal. Let’s especially stay tuned for more moves coming out of Traplight Media.