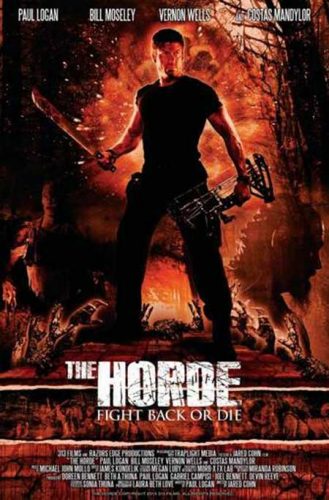 The film follows John Crenshaw as he accompanies his girlfriend and her students on a weekend nature-photography expedition deep into the woods. What should be an educational and fun-filled weekend turns into horror as the group is besieged by an unspeakable evil – a horde of hideously disfigured, mutated humans with an insatiable taste for blood. As things go from bad to worse, Crenshaw becomes their only hope if they are going to get out alive.

Low budget horror allows almost anyone can make a movie. There are hundreds of low budget horror movies made every year where the writer or director have pivotal roles in the movie’s cast. The people behind the movies, many of whom have had bit parts in other movies, throw together a movie as a kind of demo reel to help them earn bigger roles. It’s initiative like this that breeds movies like The Horde, an action horror movie about cannibals.

The Horde starred Paul Logan as John Crenshaw, an ex-Marine who tagged along with his girlfriend Selina (Tiffany Brouwer) as she took her class on a nature photography trip. When they encountered a group of cannibalistic meth cookers led by escaped convict Cylus Atkinson (Costas Mandylor), John used the skills he learned in the military to save his group. He kicked, he punched, and he busted a lot of ass to free his girlfriend and her class.

There were three main sides the story told in The Horde. They met at a few points, but were fairly easy to separate from one another. The cannibalism story, a looming threat to the movie, only got the focus in one scene. One of the students, Riley (Thomas Ochoa) was captured by the cannibals and sent to the butcher, Earl (Vernon Wells). It was a tense scene of stationary cat and mouse as Earl toyed with Riley, telling him about how great cannibalism is and his favourite cuts of human meat. This was the only time that cannibalism was a part of the story, thought Earl’s butcher shed would show up again.

The second part of the story was the kidnapping storyline. It overlapped with the cannibalism storyline in the Riley scene, but in the case of Selina and her student Hailey (Sydney Sweeney), they weren’t taken as food. The gang of mutants and convicts wanted the two women for sex. Selina was chosen by Cylus as his sex slave. This was the part of the story where John came into play. He wasn’t stopping the gang because they were cannibals. He wanted to free the kidnapped people. The action came into the movie through John kicking mutant cannibal butt. He ran in with a crossbow and his fists of fury to take down tens upon tens of people single handed. It led to an explosion as he distracted the bad guys so he had time to free Selina.

For the final layer of the movie, there was a criminal aspect. Cylus was a fugitive. After escaping the shackles of prison life, he went back to being a despicable person. He kidnapped women for his own pleasures. He also set up a meth lab, and was making millions of dollars off of the illegal substance. This part of the story would be the driving force of the final confrontation.

Paul Logan wrote the screenplay for The Horde. It showed through the fact that he was the action hero. Many low budget films are made by someone’s desire to showcase their action chops. This movie was about John Crenshaw kicking butt without taking names. He did whatever he needed to do to ensure the safety of the people he cared about. Paul Logan was serviceable as the hero. He is not the greatest martial artist to ever be shown in a movie, but he can fight well enough to entertain. What he lacks is captivating acting ability. Again, he was serviceable, but he doesn’t have that quality that pulls you in. He isn’t someone that you would be champing at the bit to see more of.

On the other hand, you have Costas Mandylor. His portrayal of Cylus Atkinson was the best performance in The Horde. He relished in the gruff threat of the character, turning him into a menacing figurehead for the cannibal mutants. It was easy to root against him because he felt so evil. This performance set the stakes. Without the stakes, there would be no reason to want the good guy to win. 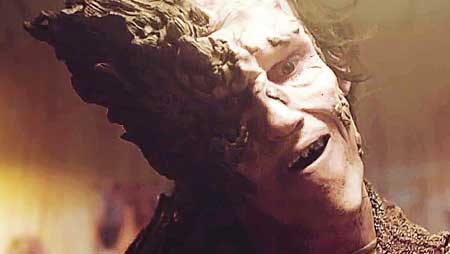 The Horde was a fairly entertaining movie. It was nothing exceptional, but you could put it on, have a decent time with it, and not feel like you wasted an hour and a half of your life. If you’re looking for kicks and punches with an okay storyline about criminal meth-cooking cannibals, this is your movie. You could end up with something much worse.