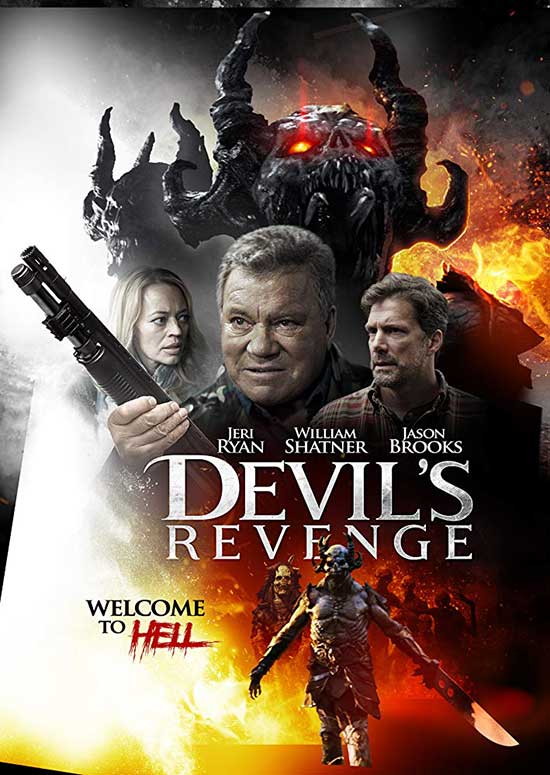 John Brock is a down-on-his-luck archaeologist who returns from an expedition to the caves of rural Kentucky after unsuccessfully trying to locate a mysterious relic that his family has sought for generations. Upon his return, John starts to see dream-like visions of a ferocious bird-like creature from ancient folklore. John soon learns that the cave he came into contact with on his last expedition was indeed the cave that contains the relic and also a portal to Hell and a place of worship for the Occult. John discovers that the only way tostop the increasingly realistic visions is to go back to the cave with his family, find the relic once and for all, and destroy it.

When I saw that “Devil’s Revenge” had The Shat in it, I was all in, baby. The Shat and I have had a love/hate relationship since I saw him in the original Star Trek series when I was a little kid. I love to watch him chew the Hell out of every scene (or act so bored that he can barely deliver his lines), but I generally hate everything he has been in. Just looking at the promo art for the movie was a clear sign this would not be a happy experience, but, at least, we have The Shat.

(Probably will get some legal notice about the number of times the site is allowed to print “The Shat”, but it sums up both his performance and, to be honest, the whole damn movie.)

We start with three guys in a cave. They are looking for something the group leader, John, is desperate to obtain. Just ignore the bright light filling each new cavern that is deeper in the cave system. After Shemp – I mean, the mostly-pointless third guy — tumbles down an incline like Gerald Ford nose-diving down the steps of Air Force One, John leaves the guy to suffer with a broken ankle while checking out “something” he thought he saw.

Wouldn’t you know it? Shemp gets himself all sliced up while the other two are off finding each other. But it is okay because John actually SAW “the relic” he has been searching for, but it “disappeared”. He also had visions of demons, THE DEVIL, and Aztec people being slaughtered in the very cave in which he is failing to convince the audience to stay awake. The quest is real!!

Get used to hearing “the relic” because that’s all the movie gives you. Do I need to point out that the writing in “The Devil’s Revenge” is weak? It is very weak.

In moments, we see John driving as he gets a call from his wife Susan, played by Jeri Ryan (I hope she was well paid for this). At this point, the audience realizes that John isn’t in Mexico or even outside the USA. He’s in Kentucky. Kentucky!?!?! When the Hell did the Aztecs migrate to Kentucky? While there, they must have bred with the mountain folk because the “Aztecs” in the flashbacks are very, very pale. Of course, they seemed to live in the caves, but still, it is to laugh.

The revelation that John is merely a few hours or so away from his family at best makes the conversation with Susan awkward. They talk like two people who haven’t seen each other in weeks instead of sleeping in the same bed most nights. To be honest, they talk like characters from two different movies trying to figure out what in Hell they are supposed to be doing. The fact that one of his crew was brutally slaughtered doesn’t get much coverage during their chat. What about notifying the police, buddy? I’m sure you’d be in lockdown being interviewed for hours about where you were exactly when Shemp got hacked up. It would be the next day or two before you’d be released. IF you are released.

But such logic would get in the way of the bullet train (sarcasm, folks) that is “The Devil’s Revenge”. As consolation, we watch while John has a heart attack and performs the most amazing low-to-no-speed crash caught on film.

As John fades in and out, he sees the demons from the cave surrounding the emergency room table as his heart falters, and Jeri Ryan makes “concerned” faces for the camera.

Okay, let’s just stop here. If you see where this is heading <cough> ”Jacob’s Ladder” <cough> then you are on your own beyond this point. Or you are as dedicated to The Shat as I am.

After John comes back from the dead and seems to be in perfect health (some heart attack!), he goes to round up his family. We get lots of padding as John has his reality undermined by the cave demons. He roughs up people as they mutter vague threats that they never made. He sees the demons appearing everywhere. He experiences continuity errors – no, wait, that is the movie.

For those of you who are wondering, no, I haven’t skipped William Shatner’s first appearance in this film. He doesn’t show up until a good 30 minutes or so into the film. Oh, that would be right about now.

John goes to see his father, played by you know who. This may be a high point in Shatner’s illustrious career. High point/low point – isn’t it about the same with Shatner?

Is there no end to this man’s magical acting skills?

Basically, he calls his own son a wimp (he uses the p-word, which might not be cool with the editor here) and threatens to use his heirloom shotgun to blow John’s head off if he doesn’t stop moping around and get that damned relic. Somehow, this is John’s responsibility while Dad spends his time playing with horses. Oh, right, Shatner wasn’t paid enough to be the star of the movie, but he did get his name added to the “Presents” part of the credits even though he isn’t a credited producer on the film.

After flailing about for far too long, John, with the whole family (wife and two blatantly unrealistic teenaged kids), goes back to the cave to end the curse, once and for always.

I cannot qualify the stupidity of this move, even when you factor in the predictable ending. Hey, family, let’s go on a family outing to a cave that takes hours to reach and where we’ll all meet a horrible, gruesome, not-very-nice death. At least Jeri Ryan to have stopped giving a damn and played the “Ain’t this fun, kids?!?!” bit with a bitter edge that screamed, “You want perky? Here’s your perky!!!”

After watching damn near every step of the journey, they find “the relic” with amazing ease. Oh, but those pesky demons KILL EVERYONE BUT JOHN!!!

Wait! The demons were just goofing on poor John. His family just contacted Shatner by satellite phone to say they are still trapped in the cave. The Shat hops on his Rascal – sorry, hunter’s utility vehicle — to race to the rescue. But, if he is just a short go-kart ride from the cave and he is fully capable of exploring the cave, why threaten to blow John’s head off and make his son’s life a living Hell?

Doesn’t matter. What does matter is that Captain Kirk is packing a rotary grenade launcher to take down the demons. AND WE GET TO SEE THEM BOTH IN ACTION!!! OMFG!!!! It is awesome enough to make Michael Bay kick himself for not realizing this is what his movies are missing.

Do they find the relic? Do they save John’s family? Does Patton Oswalt do stand-in work for William Shatner? Does The Shat realize he should be a good 100+ foot distance from the destination of the grenades before firing the weapon? 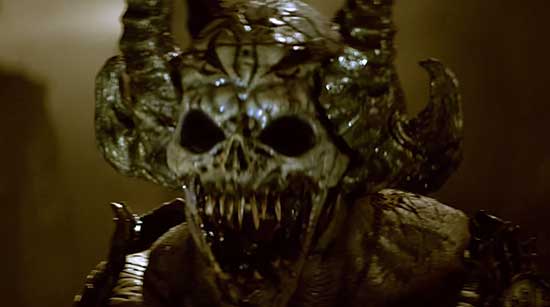 Does it really matter when you have Shatner blowing up demons with a grenade launcher? No, especially with the ending we get.

Is “Devil’s Revenge” as bad as I make it out to be?

Yes. Completely and totally. Any movie that makes a viewer long for the relative safety of a movie made by “The Asylum” can never be good for anything more than comedy. You get plenty of that in “The Devil’s Revenge”, along with tedium, blatant continuity errors, ample shots of people walking (and walking and walking), a nonsensical plot, and a town with apparently only one exit (you’ll know the scene when you see it).

Not everything about the movie is bad. It is well lit considering they are supposed to be in a dark cave most of the time. The demon costumes are cool but belong on the cover of a heavy metal album. Umm – good drone work?

“Devil’s Revenge” is best avoided in its entirety, but the scenes with William Shatner are highly recommended for the cinematic masochists out there.

Devil’s Revenge is now available on blu ray per MVD