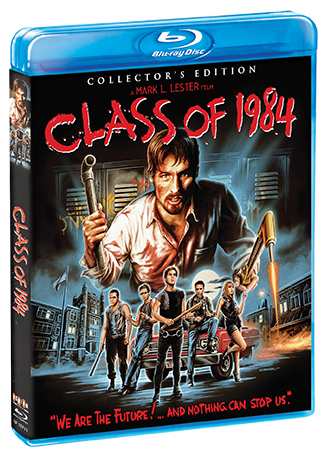 Fans who order directly from ShoutFactory.com will have their order shipped two weeks early, and, while supplies last, will also receive a limited-edition 18”x 24” poster of the newly commissioned artwork.

The teachers at Lincoln High have a very dangerous problem… their students!

Directed and co-written by Mark L. Lester (Class of 1999, Commando, Firestarter), Class of 1984, with its vision of a decaying, violence-plagued inner city school, is one of the most provocative cult movies of the early 1980s. With an original story and screenplay co-written by genre veteran Tom Holland (Fright Night, Child’s Play, Psycho II, The Beast Within), the film is also notable for its Alice Cooper theme song ‘I Am The Future,” as well as its memorable cast, which includes Lisa Langlois (Deadly Eyes, The Nest), Roddy McDowall, Stefan Arngrim (Fear No Evil) and Michael J. Fox in an early role.

In Class of 1984, Andy Norris (Slaughterhouse Five’s Perry King), an idealistic and naive music teacher who has moved into the Lincoln High community with his pregnant wife Diane. Appalled by the crime-infested school, Norris soon crosses sabers with its teenage kingpin, the shrewd and sadistic Peter Stegman (The White Shadow’s Timothy Van Patten). With Norris setting his sights on reforming Stegman, the young miscreant declares war on his teacher, and the duo sets a fateful showdown into motion on the night of an important school orchestra performance.