February 2014 begins with a double feature genre film review as the HNR gang tackle the horror film Fear Clinic and the sci-fi thriller Project Almanac. Dave provides a special report from the set of the Robert Englund – Robert Hall feature while Doc and Thomas face off about the successes and failures of found footage combining with time travel.

Dave shares the horror news of the week with news about Joe Hill’s take on Tales from the Darkside, Kevin Smith’s anthology Holidays and Danny Trejo’s turn fighting lava zombies in The Burning Dead.

Co-hosts Doc Rotten, Santos (The Black Saint) Ellin Jr., Dave Dreher, Thomas Mariani and Vixen, the voice of reason, are back again this week to give you the best in horror as they recap, review and obliterate all that is horror this week! Also, hang tight for news of the latest HNR contest teaming up with Anchor Bay Entertainment featuring the Blu-Ray of Zombie Killers: Elephant’s Graveyard and a new giveaway film discussed tonight, Fear Clinic!

Robert Englund stars as the deranged Doctor Andover a “mad” scientist responsible for developing a treatment for handling…fear. But has he pushed his invention too far? Had he awakened something hidden deep in the dark recesses of the human mind? Something that want to be free? The Grue-Crew dive into the lastest horror film from Robert G. Hall (Laid to Rest) with nervous…anticipation.

Found footage meets time travel meets teen drama in the latest Michael Bay produced sci-fi thriller Project Almanac. To no one’s surprise Doc enjoyed the found footage aspect while Thomas and Santos took issue with this approach. Vixen chimes in to support the lead’s character flaws and troubled decisions but admits that the ending has her confused. The Grue-Crew both love and hate this film, find out why…

Horror News Radio. teaming up with Anchor Bay Entertainment to hand out two Blu-Ray copies of Zombie Killers: Elephant’s Graveyard, is happy to announce we have two winners: Karin Aaberg from Minnesota and Jeff Hernandez from Ohio. 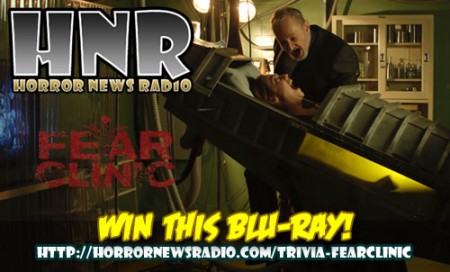 Horror News Radio is once again teaming up with Anchor Bay Entertainment to hand out two Blu-Ray copies of Fear Clinic. The film from director Robert G. Hall and stars Robert Englund, Fiona Dourif and Thomas Dekker. Entries will be accepted until Midnight (Eastern Standard Time),  February 15, 2015. All you need to do is complete the The Black Saint’s HNR Horror Trivia Question at this link. The Anchor Bay Entertainment Fear Clinic Blu-Ray giveaway is open to US addresses only.

Dave shares the Horror News of the Week with news of writer Joe Hill bringing Tales from the Darkside back to television on the CW. Holidays is the title of a new horror anthology film from Kevin Smith and friends. Who knows what is truly going on with The Burning Dead featuring Danny Trejo and…lava zombies? More faith-based horror surfaces with a new trailer for Something in the Woods, a bigfoot movie. Nick Carter from Backstreet Boys is directing his first feature, the horror film Dead West from Asylum.