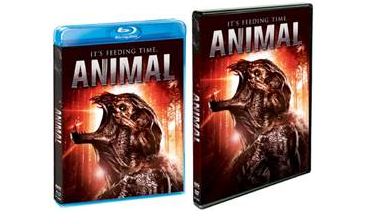 There’s a part of the wilderness you haven’t explored yet.  The deeper you go, the darker it gets. Something ominous is lurking and ready to plumb the weakness of the human psyche. On February 17, 2015, SCREAM FACTORY™ will unleash director Brett Simmons’ suspenseful creature thriller ANIMAL on Blu-ray™ and DVD. Executive produced by Flower Films, ANIMAL features a generous dose of suspense terror and follows a group of close-knit friends finding themselves stranded in unfamiliar territory, pursued by a menacing, blood thirsty predator.  Holed up in an isolated cabin, tensions mount as long-buried secrets are revealed.  As the body count rises, the group must put their differences aside and fight for survival.

Packed with special bonus content, ANIMAL is a must have for horror movie enthusiasts and loyal fans. The Blu-ray has a suggested retail price of $19.97 and $14.93 for the DVD.

Pre-order is available now or Amazon