The next dark horror fiction release from Grey Matter Press seeks to answer the terrifying, age-old question of what death has in store for humanity when the anthology DEATH’S REALM is published on Tuesday, January 6, 2015.

DEATH’S REALM, the latest volume of all-new horror from the Chicago-based publisher, features sixteen tales by critically acclaimed, award-winning genre authors and horror’s freshest new voices whose work investigates what happens at the end of this existence and the beginning of next. 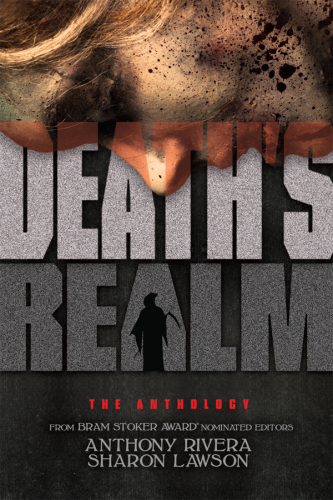 “Whether we choose to think about it or not, somewhere ahead of each of us on this road of life is a dark intersection where everyone will certainly arrive,” said Anthony Rivera, Grey Matter Press publisher and DEATH’S REALM editor. “It’s this much-dreaded and deeply mysterious convergence between life and death where the exceptional horror stories in DEATH’S REALM take place.”

Grey Matter Press, known for publishing titles that span the genres of horror, science fiction, dark fantasy and speculative fiction, today provided the first glimpse into DEATH’S REALM with the unveiling of the title’s cover artwork and a synopsis for each of the stories included in the anthology.

“Each of the well-crafted, character-driven tales in DEATH’S REALM take a look at how the forces of the living and those of the dead use their powers to influence what happens on the opposing side of the veil,” explained Rivera about the theme of the anthology. “It’s this collision between the Here and the Hereafter where readers will experience the truly thought-provoking and terrifying work included in DEATH’S REALM.”

“Horror as fiction has forever shown us how the dead influence the world of the living,” said Editor Sharon Lawson. “But those of us yet to pass beyond have an effect on the dead as well. Each of the stories in DEATH’S REALM provide a unique glimpse into the horrifying consequences that take places when these two forces collide.”

Nominated for the prestigious Bram Stoker Award® for their editorial work on the premiere Grey Matter Press anthology, DARK VISIONS: A Collection of Modern Horror – Volume One, Rivera and Lawson have been recognized by critics for their ability to curate some of the most creative and heart-pounding works of modern dark fiction. They expect DEATH’S REALM to continue that trend with its selection of sixteen new tales of terror from powerhouse authors.

“DEATH’S REALM is the first in a long line of titles to come from Grey Matter Press in 2015. We’re proud to be able to kick off what is going to be a very busy year with an anthology that gives readers a front-row seat into the painful tragedies, personal anguish and terrifying events that take place when the forces of life and death battle over the human soul,” said Rivera.

DEATH’S REALM will be available at bookstores worldwide in trade paperback and a variety of digital formats upon its release on Tuesday, January 6, 2015.