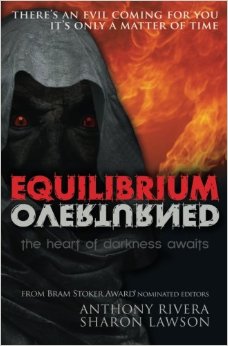 The Final Testimony of Molly Ryder By Jeff Hemenway-Kristoff a murderer is used as a test subject in a psylink to unveil the true darkness that lies within.

Amnion By John Everson-A researcher may have discovered the fountain of youth comes at a very terminal cost.

Martial Law By JG Faherty-U.S. soldiers rise from the dead and continue battle in relentless aggression.

Through The Ghostlands By Rose Blackthorn-Brook and London, twin sisters cope with a post-apocalyptic world and the beckoning spirits within.

The Collected Sylvia Volumes 1 to 1388 By Geoffrey W. Cole-Dorian searches for a better interplanetary life with his significant other.

Perfect Soldiers By S.G. Larner-Demons vie to become an invincible army while elsewhere genetic clones are virtually indestructible under the U.S. government.

Wombie By Martin Slag-Ethan a veterinarian tries to make sense of a species brought in for treatment.

No Man’s Land By Roger Jackson-A military unit uncovers a ghastly secret of what becomes of their fallen comrade cadavers.

The Alamo Incident: From The Chronicles of Timaeus Shields By Sean Eads-A glimpse at the historical chapter with an unworldly twist.

The Butcher of Gad Street By Stephen T. Vessels-Aerid purses the captors of his daughter.

Queen Of The Thermodynamic Equilibrium By Josh Vogt-Sirilly and Iomund take a tourist flight of wonders of the galactic realms with subliminal sights and death.

Compartmental By Jay Caselberg-Adam takes out Sabine and ponders if she is truly the one.

Not A Horror Story By Tim Waggoner-A young woman realizes just how much of a pain it can be renewing your driver’s licence at the DMV.
Sunrise By Tony Knighton-1st person account of one man’s struggle to get his son medical attention.

The fine folks at Grey Matter Press have done it again. This anthology embodies some of the most disturbing psychological shorts in circumstance horror today. For such a cerebral or articulate term as equilibrium the title defines it all within. Described as a state of emotional or intellectual balance or a state of adjustment between opposing or divergent influences or elements, each author hones in on this criteria unleashing gripping good terror. Equilibrium Overturned from an overall perspective indicates a shift in stability, forever challenging traditional sentiment.

Each tale evokes a sense of altered reality. The subtext seems to reoccur predominately as a sense of suspended hope, a struggle with despair and resistance against inevitable doom.

Perhaps the greatest appeal is the varying sub genres within. Most of the stories have a supernatural feel or science fiction while others have a post-apocalyptic type setting in survival horror. Rest assured there’s guaranteed to be a little something for every genre fan.

The constant psychological struggle between rationality versus erratic or the id versus the superego if you prefer is highlighted. From one author’s submission to the next the individual protagonists are faced with episodes of challenging moral fabric and integrity.

From a social psychology perspective aggression is most certainly undeniable. The characters within these tales within are susceptible to the elements surrounding them such as excessive congestion, noise and heat. The premise tends to lure the reader further into the abyss in constant wonder what carnage may unfold.

The prose and style of the authors are an exquisite blend of gifted wordsmiths. Each author provides compelling tales that are often spell binding and surely deliver in resonating fashion.