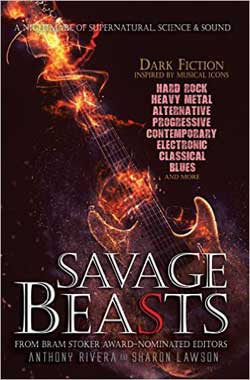 A collection of eleven musically inspired tales to orchestrate the macabre.

To Soothe The Savage Beast by Edward Morris: A security guard has a ghostly encounter with a legendary musician.

Going Home by Karen Runge: Inspired by the Nine Inch Nails song, Piggy, Hayden and his girlfriend play, “if you could be any animal what would it be?” to kill time on a dreaded road trip.

That Song You Can’t Get Out of Your Head by John F.D. Taff: A pop superstar reflects upon an encounter with Linus Paulson, on one hit wonder from the ‘80’s and learns the secret to success in the music industry comes at an unworldly price.

Petilence By Beemahr by Shawn Macomber: A perfumist experiments with insects unbeknownst at an apocalyptic consequence.

Killing Noise by Konstantine Paradias: Symphonies and orchestras are used as weapons of mass destruction.

When Death Walks the Field of Battle by J.C. Michael: In a post-apocalyptic realm a man grapples with morals and orders from his superiors.

An American Ghost in Zurich by Daniel Braum: A particle physicist goes to Zurich on assignment that may very well have catastrophic fate written all over it.

Eidolon by E. Michael Lewis: A musician’s obsession with an ill-fated organ called the Mellotron may be the very destruction of his inner self.

Crawling Back to You by Paul Michael Anderson: A tale of a vampire couple unable to let go of their own mortality.

Die Musik Des Teufels by T. Fox Dunham: A desperate man attempts to employ a musical therapy as a method to dissipate his son’s terminal illness.

As the old adage goes music calms the savage beast. Grey Matter Press never ceases to amaze me with their compelling anthologies with a common theme. Unless you’re entirely cynical, music moves us in ways we’re simply rendered without ability to describe. It can have therapeutic value, an emotional escape, bring us closer together and help us make sense of the often very real, dark emotions that cluster our psyche.

Each tale within Savage Beasts is as diverse and unique as the very authors that created each. We get a glimpse into the disturbed, demented and often sorrowful imagination of these wordsmith’s and the particular songs that prompted the creative spark behind each. We have music for our daily commute, music to work out to, music to drown our sorrows and music to simply lift our spirits when we need it most. In short the musical experience is an escape, a swift prompt into holding one’s sanity together. This collection from Grey Matter Press further tweaks this psychological phenomenon and depicts the fantasy side of our imaginations, where the darkest recesses of our minds go when listening to our favorite songs.

The dark, all-encompassing theme seems to be the trademark of Grey Matter Press and is no mystery as to why they’d become my go to publishing house for anthologies. When asked for a referral for a good short story collection I often state without hesitation to the very press that has enchanted my reading attention, to Grey Matter Press. Savage Beasts is no exception as the contrast of authors is most refreshing, often poetic, primal, speculative and boldly crossing the lines of splatterpunk (as much as I loathe the term) fiction.

Some of the authors will be familiar, as they were with myself. Morris, Taff, Lewis, Anderson and Dunham are each I’ve become accustomed to and know what to expect. Any and all of these met and exceeded any prior expectations and obliterated and skepticism in terms of imaginative borders. Some new contributors, that I’d had no prior exposure where on the marquee as well. Suffice to say the common thread between each of these short tales is each is every bit as innovative and imaginative as the last. I for one will be keeping an eye out for the next Grey Matter Press release.

I particularly enjoyed the afterword notes of each writer, describing the meaning behind each story, quite often the song title and how the tale was conceptualized. A brief bio of each author is listed upon the conclusion for those ravenous to explore additional efforts from these contributors.

A resounding standing ovation for Savage Beasts which beckons the question, what song will you listen to next, to calm the Savage Beasts?