A group of explorers make use of a newly discovered wormhole to surpass the limitations on human space travel and conquer the vast distances involved in an interstellar voyage.

In the world of Interstellar, the population refers to itself as a “Caretaker Generation”, whose duty it is to improve sustainability for future generations. Current corn farmer (& former pilot) Cooper decries this choice, claiming that “We’re explorers, not caretakers”. The big problem is that there’s a thick coat of dust that’s pretty much killing our ability to grow anything, save for corn. It’s been decided that for humanity to survive, it needs to find a new planet to populate – the earth is dying. And so Cooper (Matthew McConaughey) is drafted to pilot a flight through a recently discovered wormhole that leads to a completely different galaxy, a galaxy with a few planets that seem to be suitable for human life.

In actuality, it’s all a lot more complicated than that, but to even attempt to give you a full description of Writer/Director Christopher Nolan’s labyrinthine, densely plotted, wildly ambitious, mildly convoluted plot would be folly. And there’s no real to way to break it down without giving away some extremely important spoilers anyway. Suffice it to say that Nolan basically redefined the superhero genre with his Dark Knight trilogy (2005-12), and created Inception (2010), which combined the summer blockbuster with a shot of mind bending weirdness. So with this being his first full out science fiction film, you can expect something like you’ve never seen before.

Taking place in the near future, Interstellar posits so many questions about who we are and where we’re going as a race, that it’s easy to forget that it all begins as a story about people. Cooper has two children, Murphy (Mackenzie Foy) & Tom (Timothee Chalamet), and he’s passed on his desire to know more to Murphy. After the remains of a dust storm reveals a odd anomaly in Murphy’s room that points them to what’s left of NASA, Cooper’s former mentor (Michael Caine) persuades him to pilot a top secret mission with his daughter Amelia (Anne Hathaway), Doyle (Wes Bentley), Romilly (David Gyasi) and an extremely verbose robot called TARS (Voiced by Bill Irwin). Together the four of them go into the wormhole to find new habitable planets, but, being a Nolan film, Interstellar has its aim set a lot higher than what you might be expecting. 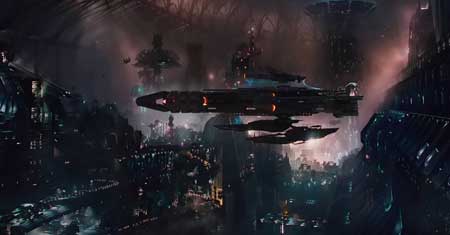 As immense as Interstellar is, it’s really all about the little things that make us human, Love, Hate, Mistrust, Fear, Anger, Sadness, Happiness & any other emotions you can think of. It takes the human condition and wraps it up in a giant sized story about new planets/galaxies, but it never loses sight of the big picture. And in Nolan’s estimation, the big picture is how small & insignificant we all are when compared to what’s out there beyond the stars. Nolan’s visuals are marvelous & at times awe inspiring (The race to escape a tidal wave as large as the Sears tower is officially one of the most exhilarating experiences I’ve ever had in the theater – especially in IMAX), but it’s all about the story here – not the visuals.

And that’s one of two big problems I had with Interstellar, the story isn’t what you’d describe as linear. Actually, both the story and the visuals owe a lot to Kubrick’s 2001: A Space Odyssey (1968) – especially in the films final third. The film takes great leaps of faith and there are times where I literally had no idea what was happening on the screen, but to Nolan’s credit, I wanted to find out. This isn’t to say that there weren’t moments that felt slow though, at nearly three hours long, Interstellar has more than a few sloggy bits. Especially when Hathaway goes off on tangents about our place in the universe and how powerful true love is. But I was never truly bored, and although its daunting running time was indeed a challenge for my kidneys, I never once thought about getting up to relieve myself. Interstellar is far to dense to risk missing even five minutes of it. In addition, the rousing score (by Hans Zimmer) is lush & gorgeous, but at times it’s so bombastic that it overwhelms any dialogue being spoken to the point where it simply can’t be heard. 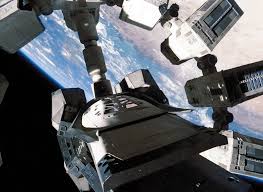 As the film winds up to what some might find to be a challenging finale, it gets more and more convoluted. It really gets wonky towards the ending, as if Nolan just decided to go all out & toss in every wacky theory about time/space that he could dream up. It’s during these final scenes that its debt to 2001 is fully realized, with visuals that seem to be lifted part & parcel from Kubrick’s masterpiece, the image of the TARS unit (which, in ways, kind of reminded me of Proteus from Demon Seed (1977), is also a direct reference to the black monolith from 2001 as well. The TARS unit also adds a lot of welcome humor to the proceedings, which helps to lighten up the mostly somber mood of the film. Thankfully, none of this is presented in 3D as I think seeing some of this in 3D + IMAX might make some audience members both dizzy and delirious – it’s heady stuff indeed.

I kind of hate knocking a film for being as ambitious as Interstellar is, but I have to admit to being nearly overwhelmed by the enormousness of it all. As it all comes together, it tosses in the idea of space/time conundrums and the possibility of a higher power guiding our explorers towards their final destination. In all fairness, I think I understood it all once it was over, but I’ll admit to rethinking a lot of it as I drove home afterwards. All of the performances are good, but it’s McConaughey that steals the show and he shows that the Oscar he won last year for Dallas Buying Club was no mistake. 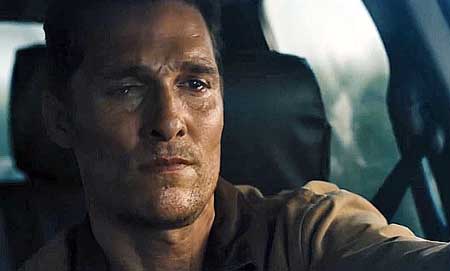 Ultimately, Interstellar is about humanity and our innate desire to persevere. It’s a emotionally draining experience (You will shed a tear or two) with some truly grandiose set pieces that will astound you, but it never loses sight of the fact that in the end, it’s all about the things that make us human. It’s truly a blockbuster for the thinking man, but it’s still a lot to sit through and even more to digest, so I would approach Interstellar with caution. I truly enjoyed the journey that Nolan & company took me on, but I’m not too certain I’d want to go through it again.