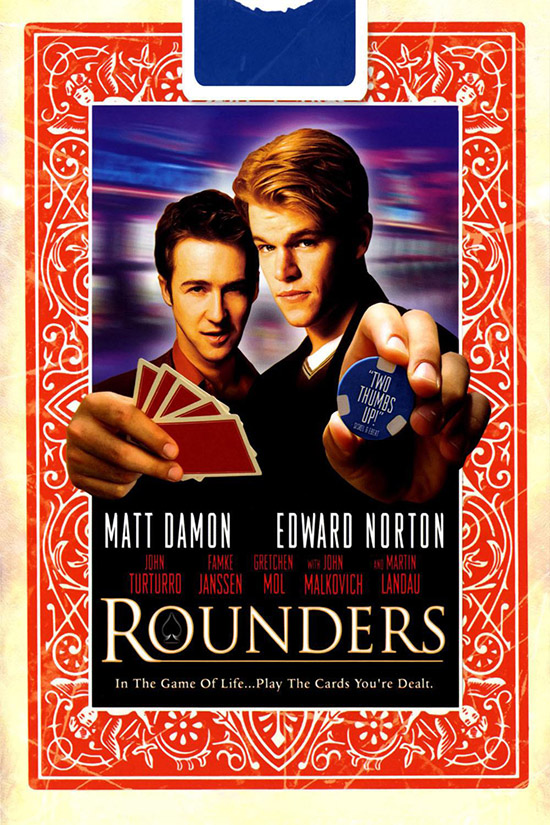 A young man is a reformed gambler who must return to playing big stakes poker to help a friend pay off loan sharks.

Rounders, an otherwise typical poker drama movie has found its place over the years as a repeat viewing cult-like favorite. Starring a full cast of exceptional acting talents, the focal points of the film are the talents of Matt Damon as Michael McDermott and Edward Norton as Lester “Worm” Murphy.

Michael, a rather brilliant poker player who is able to calculate the cards combined with the expression and reaction of his opponents, finds himself facing a change in lifestyle when he bets all his savings against KGB frontrunner Teddy (John Malkovich ). A rough night quickly turns into a decision to leave the cards behind in favor of making an honest living as a delivery drive

It is only when his former best friend Lester “Worm” Murphy played by actor Edward Norton is released from prison that his temptations are ignited with a renewed vigor for hitting the tables again. Things get complicated when his girlfriend Jo (Gretchen Mol) decides that she cannot face another round of gaming their savings away while Dermott is reunited with his passions. Though as brilliant of a player Michael is, it is the actions of his best friend that make things even worse. “Worm” happy to be out in the circuit again complicates matters by reverting to his old tricks and racking up additional debts that he can’t pay.

To make matters worse, his old assistant is now hot on his trail with a debt he now owes to him and a price over his head. Essentially Lester is digging much deeper holes (than before he was arrested) bringing his buddy Mcdermott back into the mix (whether he wants to or not).

It quickly becomes a game where money is easily made by smart card playing and clever communications into a life threatening situation that puts Mcdermott in a position that places his talents against the best in order to save his friend.

The rhythm of this film moves at a great pace always keeping the action delivering in one form or other.Actor John Turturro as Joey Knish adds an added flavor to the mix as the ongoing voice of reason constantly playing the devil’s advocate to Murphy and McDermott. “Rounders” is well played and acted incorporating a human quality to the story which is authentically portrayed.

Matt Damon is the shining star here that brings an intellectual aspect to the story, one such role that would later be repeated in similar fashion per the film “Good Will Hunting”

It is the subtlety of Damon’s character that often overshadows the more obnoxious character delivered by Norton, keeping a balance between extreme and caution. Again this is wonderfully played and executed.

Taking on supporting roles: John Malkovich, Gretchen Mol, and Martin Landau add a subtle amount of story boost elevating this film just that much further. Famke Janssen as Petra reminds us what it is about her that makes us want to see more of her in films, while John Turturro is the perfect “man in the background” character…..we simply love to love.

“Rounders” even as a 1998 release, stands the test of time by keeping its fans always returning for another round (excuse the pun). Directed by John Dahl and written by David Levien and Brian Koppelman, the strength of this film is that its story is a clever play on its characters coming full circle. We know that the early confrontation with Teddy KGB is a foreshadow leading Mcdermott right back into the game by method of a rematch. This formula, despite being a “seen it coming” style, often works again and again as a repeat formula able to keep viewers engaged. 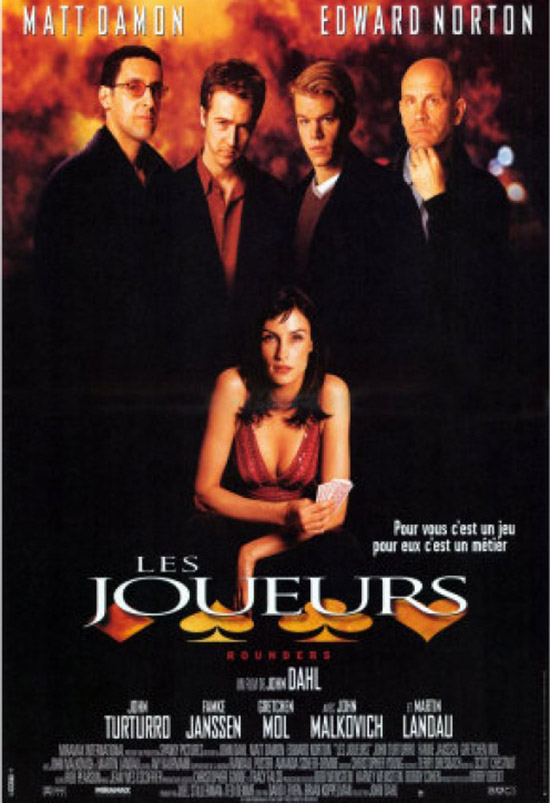 While I don’t agree that films should be deemed “cult” by merely being a great film, “Rounders” has earned its status in that regard for being a poker film that simply works. Actor Edward Norton has certainly been in his share of cult category films (“Fight Club“, “The People vs. Larry Flynt”,, “American History X“) so maybe that added element is what pushed this movie into that direction. Or maybe that late nineties period was just a cult film era for Norton….who’s to say, really?

Gambling films in general are usually hit or miss depending on what and how the plot is set into motion, though in the case of “Rounders”, it’s simply a reason to feel attracted to card playing again. Damon and Norton just make it fun!

Speaking of fun, make sure to give USA online poker a look to enjoy a similar experience online!

“Rounders” has a certain charm that delivers on every viewing. It’s the kind of charm that make films work and make us love its players. Norton is a perfect opposite to Damon’s persona creating a conflict worthy of watching. Those who like the “Rocky” or “Karate Kid” sort of experience will embrace this one with open arms.