When slacker/aspiring filmmaker Will finds the parents of his adopted brother Kris, he sees the opportunity to get some closure for his brother, as well as maybe capture a heartwarming reunion on camera. With Kris’ fiancé Brit in tow, the three of them head out to discover this long-lost family. What they are unprepared for though, is what exactly the cryptic small town has in store for them. Weird locals abound and rumors of a Bigfoot creature haunting the area at first seem silly…but things quickly escalate into a frantic, scary and action-packed nightmare with more than a few casualties along the way.

There have only been a handful of bigfoot films over the years, many of them failed to resonate with horror audiences (except for silly B-movie fun but those don’t count). The past year has seen the release of two movies about the gigantic harry beast, first of which was Bobcat Goldthwait’s WILLOW CREEK, a found footage film that has it’s moments but drags on for what seems like an eternity. Now there is FEED THE GODS, an independently produced horror film that tends to work on many levels. This is only the second film from writer/director Braden Croft and he seems to be a confident filmmaker with some interesting stories to tell.

Will (Shawn Roberts) and Kris (Tyler Johnston) are both coping with the death of their foster mother. As tough as it is for them, dealing with each other may prove to be more difficult. Kris and his lady Brit (Emily Tennant) are in the midst of starting a new life together and that includes packing everything up and moving away to New York. Will may be the older brother but he’s less established, a guy who wants to be a filmmaker but is really nothing more than a slacker. When they get a box of personal belongings left by their foster mother, Will discovers a VHS tape. After he sits down to watch it, there’s a young couple featured on it, their real parents.

The video was shot in some small, lost to the world town and this gives him an idea. He is going to find this town so he can learn the truth about his parents and wants Kris to come along. After being persuaded by Brit, Kris comes around and they pack up in search of their mom and dad. What they weren’t expecting was to learn that the town they are about to visit is also known for having an abundance of Bigfoot sightings. At first they laugh it all off but they quickly learn there may be some truth to the legends and somehow their real parents may have been involved. As they inch closer to the truth, tensions mount between Kris and Will but they will have to put it all aside when the beast rears its ugly head. 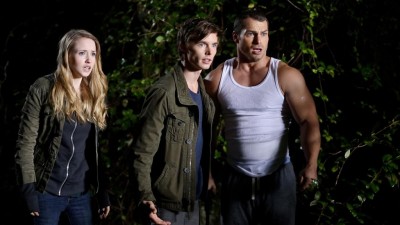 The film seems to be built upon the central relationship between the three lead characters and the mystery takes a back seat until the final act of the film. This was a solid decision since I actually enjoyed these characters and I found them to be interesting and remarkably human for a film like this. Croft has an eye for building character while still being able to allow the tension of the situation to build enough and knowing just when to move the story along. The main issue with the film is the bigfoot design .

The creature doesn’t look very good and may have possibly been the reason why it’s almost never shown in detail. We get quick glimpses but a fantastic creature could have given this the boost it needed to be highly revered. 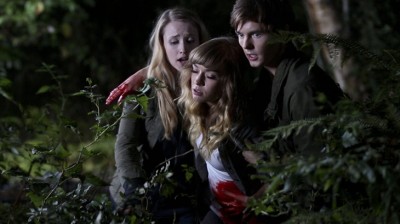 The important thing about FEED THE GODS is the fact it’s on the right track. It may have trouble hitting every mark necessary in order to succeed but the casting sure does help lessen the blow. Shawn Roberts, Tyler Johnston, and Emily Tennant will be more remembered than this film. I’m not trying to dissuade you from viewing it, I’m actually recommending it but don’t set your hopes too high. While we’re still waiting for a perfect Bigfoot film, this one will at least tie us over for a bit.

We all know any sort of problem could arise and stifle a moving from being the best it could be just as many horror films have had to cut the amount of time the creature is on screen because it didn’t quite turn out the way everyone had hoped, maybe it’s the case here (maybe not). Either way, there’s some good stuff to be found in the picture and director Croft is just refining his craft and will return with something bigger and better. (**1/2 out of 5)