Jacq Vaucan, an insurance agent of ROC robotics corporation, routinely investigates the case of manipulating a robot. What he discovers will have profound consequences for the future of humanity.

Automata is Spaniard effort set in 2044AD, a time when Earth has been ravaged by solar radiation. Now a desert wasteland, more than 90% of the population has been wiped out; only a mere 21 million humans remain. We’re told that the world has regressed technologically, but the only thing that seems to be affected are cell phones. TVs, giant holographic projectors throughout the city displaying erotica, fax machines, etc all seem okay, including the Automata robots.

To help humans as servants and/or build/work in the harsh radioactive environments, a robotics company named ROC created the Automata Pilgrim robots. These robots were created with protocols to protect humans and ensure no Skynet-like shenanigans could transpire. The protocols were: Serve the public trust, protect the innocent– Hang on, wrong movie. The protocols ROC impregnated into the Automata were to stop them from harming any living thing and self-repairing themselves or other Automata of their own volition.

Jacq Vaucan (Antonia Banderas), a claims agent for ROC, investigates cases where Automata have malfunctioned or performed sub-standardly. He hates his job and dreams of moving to the coast with his wife (Birgitte Hjort Sørensen) and soon-to-be–born baby girl. Jacq is called to investigate an Automata that’s said to have been self-repairing. Initially believing that the robot was repaired by a “clocksmith”, humans who chop and change Automata against the law, Jacq goes about his task of investigating the case. What he begins to discover is not appreciated by certain folk and they want to put a stop to it at all costs. His life now in danger, Jacq goes on the lam with the help of a handful of Automatas and learns the profound effects these “evolving” units may have on civilization as he knows it.

There is a lot to like in Automata, but there is equally a lot to dislike. On the plus side the noir-esque story plays out well for the most part and paints a somewhat realistic portrayal of a dystopian future I’d rather not like to see become reality. It has a lot of conflict to keep scenes interesting and triggers your cerebral areas (tip: that’s not in your pants) too. Some scenes were fantastically crafted and resonated, especially one involving a robot and fire which I won’t delve into more as I want you to experience it as I did.

On the down side Automata did drag a bit in the middle, the final act kind of delved into usual tropes and a few components of the story could have been removed entirely without consequence. Characters other than Jacq were given little depth. The baddies are interchangeable nobodies that didn’t command fear or respect. If it didn’t involve a robot or Antonio, it was given minimal effort, just enough to serve the story. This is not always a bad thing, but generally your other material has to be extremely solid to be able to pull it off. Unfortunately it wasn’t in Automata, however, regardless of all this, the film was still enjoyable.

Automata raises a number of questions, encouraging you to contemplate the possibilities of a future where this could be reality. Drastic climate change, our dependence on technology and the horrifying possibility of it becoming sentient, evolving and surpassing us (not even by killing), rendering humans redundant in every sense of the word… Like Justin Beiber. All these questions, and theories, minus the Justin Beiber one, are offered in Automata. They aren’t preached, but ever-present.

Antonio’s performance was fantastic. You really felt his desire to provide a better life for his family, his despair amidst the wastelands and his anger toward the Automata in the face of hopelessness. Fantastic stuff. Acting with/to inanimate objects must be hard, considering they don’t emote back, but Antonio sold it and then some. His interactions with the Automata where meticulously crafted and the dialogue wasn’t wasted or expositional. Robert Forster receives an honourable mention for his supporting role. The rest were inconsequential but I do have to mention Melanie Griffith. I have heard and seen flat, non-emotional, amateurish acting before but nothing could prepare me for what Melanie brought to this film. My Shiva, it was abhorrent. I’m amazed Antonio didn’t just walk off the set during. It was that bad.

The budget was incredibly small, considering the actors and effects employed. This is no Battle of the Damned, let me tell you. The world created was gritty, despair filled and believable. Think District 9 meets Blade Runner and the Elysium slums, but without those “Fuckin’ Prawns”… Say that with a South African accent… High-tech, futuristic structures mixed with commonplace cars and facilities. Very detailed and believable.

The Automata robots were fantastically designed and it’s important to note they are real, not CGI. They weren’t human looking like in Blade Runner or A.I., nor could they move fluidly. They even had that typical robotic voice. This ramped the realism and probability of the world created. My favourite robot was Cleo, a former “pleasure” Automata with a pear shaped ass. I don’t know why, but every time they showed Cleo walking into the distance I giggled like a school girl. Damn funny. Even though they had robotic voices and were, er, robots, the writers still managed to elicit a form of emotion from certain Automata as they progressed throughout the film.

Automata is by no means original. Its philosophical questions and concepts have been handled better by others of its ilk, but Automata is a film I would definitely recommend to Sci-Fi fans and those who like to have their brain matter massaged on occasion. 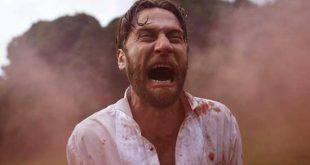