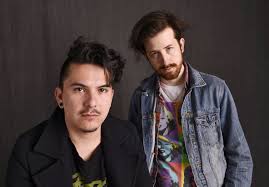 Professionally known as The Vicious Brothers, Colin Minihan & Stuart Ortiz are two of the rising names in genre film making. They’ve written and directed the outstanding Grave Encounters (2011) and wrote its sequel, Grave Encounters 2 (2012). Currently they’re out promoting their latest film, Extraterrestrial and took some time to sit with Horrornews.net to talk about it.

Horrornews.net: Before I ask you about your new film, I have to ask this question: What’s the reasoning behind calling yourselves The Vicious Brothers?

Colin Minahan: We just didn’t like the way our names looked in print!

HNN: Come on! There’s no ulterior motive behind that choice?

CM: [Laughing] We just wanted a name that people would recognize on the material that we direct together at this point in our careers. We want to create a brand and a identity for ourselves.

HNN: Extraterrestrial is such a tonal shift from Grave Encounters (& its sequel). What did you want to accomplish with it?

Stuart Ortiz: It’s funny you ask that because Extraterrestrial is actually the first script that Colin & I had written together. We met on this film making forum when we were about 14 yrs old, and Colin is from Canada while I’m from California. We started sending each other clips of our work and just started this friendship, we were each impressed with what the other was doing. Eventually we met up in the flesh, and we sort of just maintained the friendship & started working together. We literally just told each other “Let’s make an alien abduction movie!“.

CM: We started talking about the concept of making our first film together and we just loved the idea of making a alien abduction movie. It was actually the first script we wrote, but immediately after it was finished, we knew that we could never make it our first film because it was way too expensive. So we went back to the drawing board… 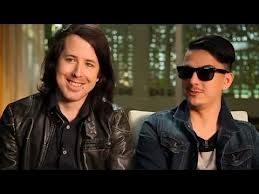 SO: And that’s how Grave Encounters came about!

CM: I would just say that we’ve always been huge fans of anything alien/UFO related, we’re also huge X Files fans. We just felt doing this kind of movie had never really been done before, and we wanted a chance to do it our way.

HNN: A good portion of the film takes place in the outdoors. What kind of challenges did that present to you?

CM: It was a very difficult film to pull off from a scheduling standpoint, because we shot during the Summer and most of the film takes place at night, and there aren’t a lot of night time hours during the Summer. It gets complex when you’re shooting inside during a night scene but it’s actually the middle of the day. You’re blacking out windows and hiding a bunch of outdoor lights from the camera, etc. It makes everything a lot more elaborate than it needs to be.

HNN: How long did it take to make the movie?

SO: If you count the actual writing of the script, I think Extraterrestrial took about…10 years [Laughing]. Once we actually got the money, it took about a year. The shoot itself wasn’t particularly long…

CM: It was about 22 days of actual shooting, but factor in pre/post production and it took about a year.

SO: The post production was a very lengthy process. 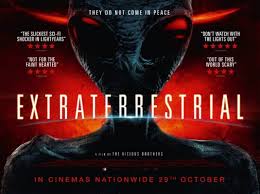 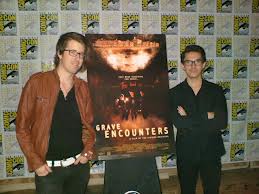 HNN: In terms of special effects & CGI, this movie is the biggest production you’ve worked on. What was it like working with these effects on a scale larger than you’re used to working with?

CM: I think we were both accustomed to larger sets from our past work on music videos, I’ve always done very elaborate sequences in that kind of space. I think it’s kind of similar when you’re talking about what is required to light a giant night exterior with an alien spaceship and the talent involved. You learn how to run a set efficiently when you’re used to fighting time in those other environments. This film felt more natural to shoot than Grave Encounters did, because we were running around an old abandoned hospital, with our night vision cameras rolling…at night.

HNN: Tell me about working with Michael Ironside.

SO: Working with Michael was great! The cool thing about Michael is that he’s been in the game a long time, he’s been working as an actor for over 30 years and I think he’s done over 200 feature films, but he’s still so excited and passionate about the work. You never know what you’re gonna get when you’re working with actors until you actually work with them, but we’re huge fan boys of Michael Ironside because he’s Michael Fucking Ironside! He was super enthused about working on this film though and he brought a ton of energy and new ideas for his character along with him. I can say nothing but good things about him.

CM: He was a blast to work with!

HNN: Colin, you directed this one on your own, correct?

CM: Well, Stu and I have a very Coen Brothers collaboration style where most every decision we make is a shared choice throughout the process.

HNN: Since the both of you work so closely together, what happens when there’s a difference of opinion?

SO: We have a fistfight, basically a best 2 out of 3 thing…

CM: We do Rock, Paper, Scissors [Laughing]! All jokes aside, once one of us throws an idea out on the table, it becomes our idea – a group idea. Our collaboration process works pretty flawlessly, but I don’t really know how. I think it’s because we spent so much time nerding out when we were kids, talking about movies over the internet. We share very similar tastes as far as writing, editing and directing as well. If there is a disagreement, it’s usually because one of us isn’t getting it yet, so I’ll explain it better or vice versa, and then it’s all good.

HNN: The film sort of ends with the hint of sequel possibilities. Was that what you guys had in mind?

SO: I wouldn’t say that we had that in mind, we definitely wrote the script to be a self contained story. That being said, if there was an interest, or a demand for Extraterrestrials – then we would definitely make that movie. There’s so many cool places we could go with a sequel, we’re gonna have to have a brainstorming session about that soon.

HNN: Is there a project you guys have lined up as your next film yet?

CM: We’re kind of talking about doing Grave Encounters 3! It’s just a matter of financing right now, it just comes down to money and that money being enough to make the film properly. We’d like to close off that franchise with a 3rd film and work on directing it together. Like Stu said, we’re constantly writing and we have a plethora of scripts – it’s just a matter of which one clicks for us next.