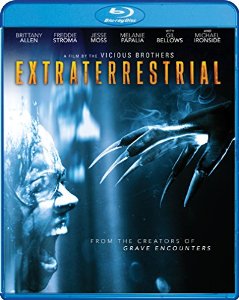 A group of friends on a weekend trip to a cabin in the woods, find themselves terrorized by alien visitors.

The alien abduction sub genre is one that’s never without at least 1 or 2 new annual entries, just this year we’ve had The Signal and last year’s entry was Dark Skies. Admirably, both of these took a different approach to the subject matter, and they succeeded to varying degrees for some – but not all – who saw them. Extraterrestrial, the latest film from The Vicious Brothers, is currently making the rounds on VOD and at select theaters near you, and it harkens back to the good old days when alien abduction films were all about the act of abduction & the terror of being one of the abductees, and not all of the extraneous stuff that the previously mentioned films tried to stuff in. 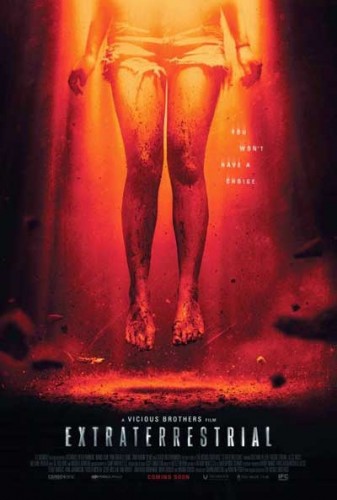 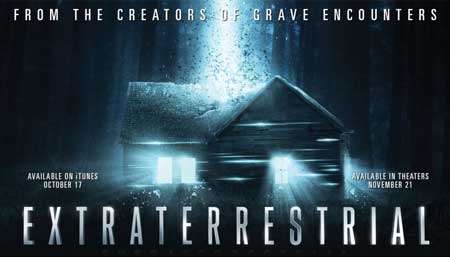 April (Brittany Allen), is about to go away with her boyfriend, Kyle (Freddie Stroma) to a cabin in the woods for a romantic vacation. Unfortunately, Kyle told a few friends about his plans, and they promptly invite themselves to join the party. Of course, none of this suits April, but Kyle is unable to talk them out of it, so Seth (Jesse Moss), Melanie (Melanie Papalia) & Lex (Anja Savcic) join April and Kyle on their now not so romantic vacation. But soon after arriving, all of them pretty much do exactly what you might expect them to do – have fun while they drink, smoke & use their handy camcorder to record all of their shenanigans. Little do they realize, there have been a rash of animal mutilations in the area and not long after arriving, they witness a flying saucer crash land not too far from their cabin. From that point on, there’s very little that happens in Extraterrestrial that you haven’t seen in other movies before.

But that’s not necessarily a bad thing. Although the script (written by The Vicious Brothers, Colin Minahan & Stuart Ortiz), seems to go out of its way to touch upon every single trope of the alien abduction sub genre, it imbues those well worn tropes with a palpable sense of dread and suspense. Later on in the film, Michael Ironside appears as a pot addled Vietnam vet that just happens to be a UFO conspiracy nut and though his role may be very familiar and even a bit rote, he takes complete charge of the screen whenever he’s on it. The mark of a great actor is when he can take a role that isn’t very original, and make it completely his own and that’s exactly what Ironside does here as Travis.

Additionally, Brittany Allen is something of a revelation here as April. I wasn’t familiar with her before this, but I came away from it totally impressed by what can only be described as her complete immersion into the role. She’s completely believable and obviously 100% invested into the journey her character takes, she’s just great here. The rest of the cast have a hard time keeping up with her, but they do their best, and while there were no stinkers here, Jesse Moss’ character (Seth) is annoying to a fault and I was praying for his demise. The cast is rounded out with appearances from Emily Perkins (Ginger Snaps) as an early abductee & Gil Bellows (House At The End Of The Street) as the sheriff who’s trying to make sense of it all. 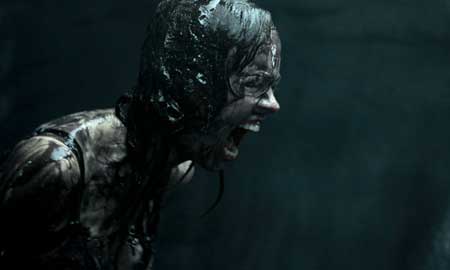 The aliens themselves are the standard “Greys” that have supposedly been sighted by hundreds of people over the decades, and I thought that making them the baddies was the right choice. One of the criticisms I’ve heard about this film is that the aliens were “uninteresting”, but they fit the bill here. We don’t see a lot of them, but when we do, they’re scary, imposing and angry! Director Minahan does a good job making their presence feel threatening, an impressive feat indeed, since the Greys don’t seem to be able to physically best us. They’re tall, but thin and spindly – like extraterrestrial scarecrows. There’s a fair amount of CGI here, but I never felt like I was being beaten over the head with it & the practical effects are impressive for such a low budgeted film. When the film finally takes us into the aliens spaceship, we’re treated to a simple, yet industrious looking set design that effectively conveys the enormity of the alien spacecraft.

The biggest problem here is the sameness of the script. Like I said a few paragraphs ago, you’ve seen all of this before – there are no surprises to be found here. This film would’ve been far more effective 30 years ago, and I must question why anyone involved might think differently. It’s a good movie for sure, but the sense of Been There, Done That looms large over the entire production. But none of this is to say that the film is without merit, I enjoyed it enough. I just wish that it tried to put an original spin on its central premise. That being said, most of you will find Extraterrestrial to be just what the doctor ordered on a night when you need to get your alien abduction groove on.

Extraterrestrial is now available on bluray per Shout Factory

Extraterrestrial – 3 out of 5 shrouds.