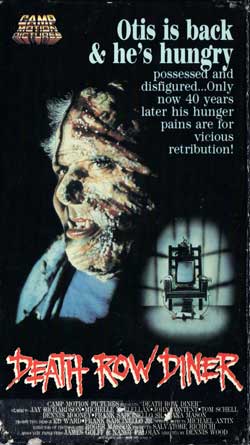 An executive of a movie studio is wrongfully tried for murder and sentenced to death by the electric chair. Before he is executed, the prison staff denies him his last meal. Decades later, a movie crew works on a horror film inside the same prison. The studio exec returns from the dead to exact revenge, killing off the film crew and eating them.

Here’s one for you, if you like DIY shot-on-video schlock from the late ’80’s. You know what I’m talking about. DEATH ROW DINER stacks up nicely next to WOODCHIPPER MASSACRE and CANNIBAL CAMPOUT. It’d be a worthy candidate in a film fest featuring KILLER WORKOUT, MICROWAVE MASSACRE, SPLATTER FARM, and DEATH NURSE 1 and 2. Like its many SOV contemporaries, it doesn’t have much of a plot–or much of a point–but it does have a lot of heart. For that you cut it some slack and, hopefully, allow yourself to have a good time. Roll with it, you know? The Elvis-impersonating caterer, the ad-libbed dialogue, the misplaced film-noir narration, Syd Wallaby’s Australian accent, the nonstop name-dropping of HOLLYWOOD CHAINSAW HOOKERS … don’t resist these charms! 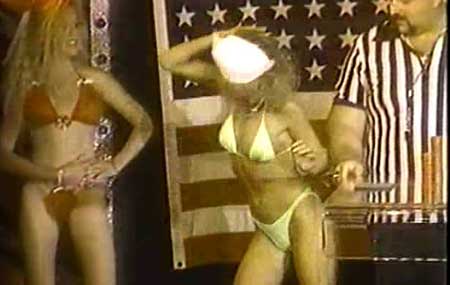 … Or do, I don’t really give a $%it. My point is, DEATH ROW DINER is pretty funny despite what an awful mess it is. It’s cheesy on purpose, and the filmmakers, specifically director B. Dennis Wood (when he makes P*rnos he goes by D3), take this as a license to be as ridiculous as humanly possible. Well, D3, you have clearance by me, the lowbrow and often charitable viewer, to be as ridiculous as humanly possible.

Our story begins in the 1940’s. Otis Wilcox has enjoyed a life producing “pictures.” Not anymore, though. He’s headed to the chair for the murder of his wife … which he DIDN’T COMMIT. Regardless, he’s toast. Worse, he’s denied his last meal. Fast forward to the present-day (1988). Filmmakers and actors toil to make a horror movie inside the very prison Otis Wilcox was executed in. What could possibly go wrong? Well, for one, the director of the film, Bill Weston, can’t stop fighting with his scream queen wife, Julia (played by Michelle Bauer from, you guessed it, HOLLYWOOD CHAINSAW HOOKERS); and Otis Wilcox comes back from the dead to kill and eat everyone in a ritualistic revenge feast! 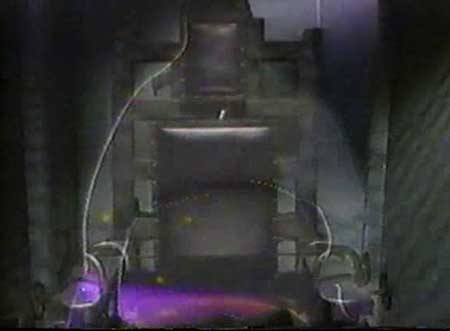 DEATH ROW DINER has a lot going on. Most of it doesn’t hang together or cohere into a seamless, unified narrative (big surprise). There are too many pointless scenes and gags for you not to reach for the remote and hit fast-forward. Some parts REALLY drag, like the made-up-on-the-spot spousal tiffs the director and actress couple constantly get into. And what the hell is the deal with Syd Wallaby, the walk-on Crocodile Dundee-type character with a swastika tattoo? Still, tapeheads will love the awesomely trippy green-screen fx of Otis coming back from the dead. The campy and cartoonish gore fx are great, too. Note the scene where Otis grabs a ping pong racket and bashes a crew member in the back of the head, causing both his eyeballs to pop out of his skull. Yikes.

DEATH ROW DINER spreads itself a bit thin–yes. There are moments where you wonder if there was a script. Or, if there was, how many last minute, on-the-spot revisions it underwent. Lots of the video tape was wasted on horribly stupid scenes. It does drag. It does get boring … despite there being some hilarious parts. 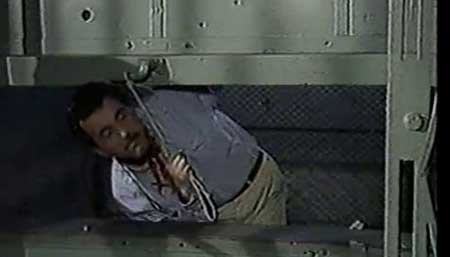 It lacks, too, the DIY enthusiasm, creativity, and madness of, say, a Jon McBride movie–there’s a guy who makes these SOV horror movies work. Watch WOODCHIPPER MASSACRE to see ineptness transcend itself. 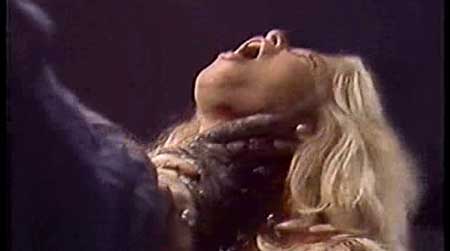 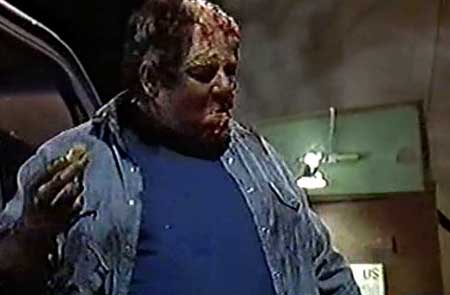 Well, maybe. I could be getting on shaky ground here.

DEATH ROW DINER, overall, is a weird, silly, novel, but, unfortunately, poorly-paced experience that bores as much as it stuns in all its amateurishness.