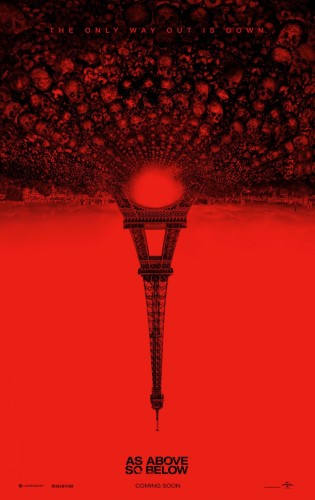 Continuing her father’s desperate search for the Philosopher’s Stone, Scarlett leads a team into the catacombs below Paris. Joined by a close friend, George, and her camera man, Benji, she begins to explore an uncharted section of the city of the dead encountering a door way to hidden horrors.

John Erick Dowdle and his brother Drew Dowdle (The Poughkeepsie Tapes, Quarantine and Devil) return to found footage as director and writers for Legendary Pictures’ As Above, So Below. The film has a lot going for it going in: a promising premise; a great cast; and, plenty of opportunities to exploit a variety of horrors from claustrophobia to witchcraft to hell itself. Perdita Weeks (The Invisible Woman, Titanic) stars as an adventurer in search of a hidden gem buried beneath Paris in the catacombs. She is fantastic as is her co-star Ben Feldman (Mad Men) as George. Edwin Hodge from The Purge rounds out the main cast as Benji, the cameraman. As with Quarantine and The Poughkeepsie Tapes, the Dowdle brothers exploit the sub genre of found footage to great effect providing the film with a sense of urgency akin to racing through a haunted house attraction. The film has a few flaws that undermine its solid beginning many of which surround elements introduced into the film and then left to squander as if they were an afterthought. The film is more interested in the characters’ journey through the maze of tunnels facing horror after horror trying to escape with their lives and sanity instead of developing many of the interesting concepts scattered throughout. To mention more could be spoiler but only if they amounted to more. The script is more interested in getting to its creative conclusion with an unusual focus and intent. Overall an enjoyable – if somewhat forgettable – film, As Above, So Below is a grade-A B-movie. 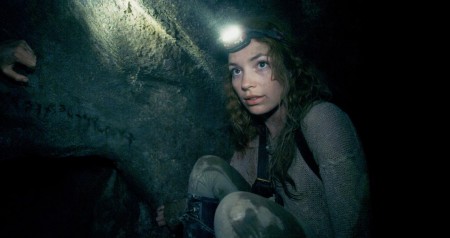 The script begins with its protagonist, Scarlet Marlowe (Perdita Weeks), risking her life Raiders-of-the-Lost-Arc-style racing against time and avoiding capture as she searches a hidden tunnel in the Middle-East that is ready for demolition. She manages to discover a hidden stature that contains secrets written on its side. Surviving the opening credits, Scarlet travels to Paris to enlist an old flame, George (Ben Feldman) to decipher the writing in hopes they will reveal where the Philosopher’s Stone is hidden. They surmise it is buried beneath Paris in an unexplored, uncharted section of the catacombs – the city of the dead. She enlists a rogue, urban explorer named Papi (Francois Civil) to guide them into the forbidden areas of the catacombs. It is not long before they are led astray finding themselves lost fighting for their lives and desperate to escape the horrors hidden in the darkness. The story begins to explore reality, fears and notions of Hell. 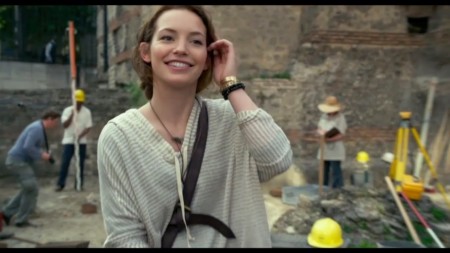 Much of the film succeeds on the casting. Perdita Weeks makes for an entertaining, if often frustrating, female version of Indiana Jones, intelligent, fearless and quick. It is her character’s journey, her quest, that the film follows. Ben Feldman is quite good as Scarlett’s ex-beau George who gets an inventive introduction fixing a church clock in Paris that has not chimed in decades. It is an intriguing and effectual crusade making him a hero of the film in his own right. The chemistry between the two works to drive the film as well even though their story takes a back seat to the journey itself. It is crucial these two are liked by the audience, the more the audience gets behind them and their drive, the more the audience can overlook their implausible deciphering of the cryptic scriptures and their often questionable decisions along the way. Their determination to locate the stone or the group’s decision to blindly follow Scarlett is what the script hinges on more than it should. Weeks creates a character that allows for this to work in most cases, at least until it no longer matters. Unfortunately, Edwin Hodge as Benji fails to get much to hang his character upon providing the stereotypical camera man filming the events at they unfold. A little more reasoning and development for Benji is something that would have served this film immensely. 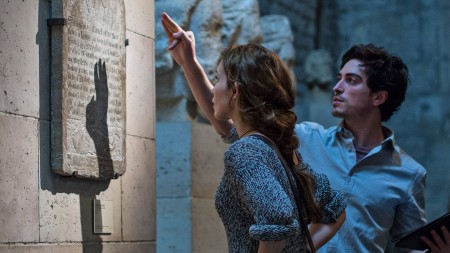 Director John Erick Dowdle and screenwriter Drew Dowdle are no strangers to found footage helming the US version of REC called Quarantine and the serial killer tale The Poughkeepsie Tapes. They follow the cinema verite model very much as they did in these prior films. Innovation is not high on the benchmarks for As Above, So Below; it is more a by-the-numbers low-budget B-movie affair. In that respect, it succeeds, creating chilling atmosphere, authentic locations and engaging characters. The highlights are the mood and claustrophobia the film achieves within the caverns and halls of the dead. The simplistic pathways and fast pace give the film a feel that resembles racing through a haunted attraction at a theme park during Halloween where scares jump out at every turn. They pause just long enough to provide some exposition about the stone and the characters to drive a few of the scares closer to home. The script regrettably does not know what to do with many of its own inventions: a coven introduced early on, a shrouded figure stalking through the bowels of the maze and the stone itself. In some respects the Dowdle brother stumble over their own feel buried in their own locations and story. They do manage to pull off an interesting ending but place too much importance upon its reveal than it deserves. A solid film for the duo but not the thrilling defining example they may be looking for. 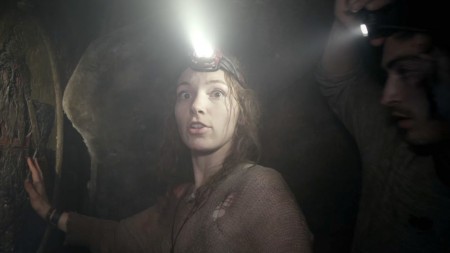 As Above, So Below is a solid found footage effort with a unique and effective location, a premise that teases more than it delivers and a cast of characters that serve the story well. The film fumbles its own story beats as it races past them screaming toward its conclusion looking to escape terrors hidden in the catacombs beneath Paris. Perdita Weeks and Ben Feldman are the film’s strength, bringing a natural chemistry to their relationship and authenticity to their explortation of the catacombs. The film sets up quickly why they venture into the unknown and sticks to it, everything else is just a distraction. To many, the found footage will be a detriment to the film as the technique does become cumbersome as the characters race down the pathways and halls of the catacombs. For those who enjoy found footage, the film delivers but never strives to be more than what it is. In some ways it works in this simple way, it is not all that complicated and never asks for much from its audience. In other ways, it needs to be more than it is to engage its audience into the character’s emotions and fears. The film, while enjoyable as a b-movie, is rarely more than a thrill ride managing to squeak out a scare or three.