SQUIRM Slithers its Way into HighDef 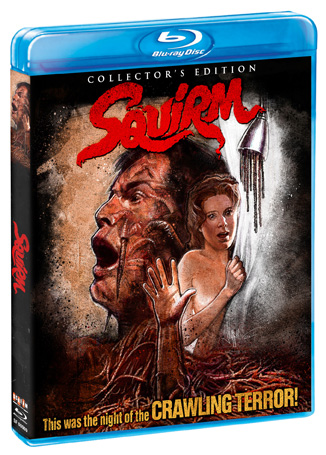 A film by Jeff Lieberman

“Squirm is guaranteed to make you do just that.” – Los Angeles Times

It was a violent summer storm. Millions of volts slashed the earth, sending hundreds of thousands of writhing, seething creatures, oozing out of the mire hungry for human flesh.  It was the night of the crawling terror for the residents of Fly Creek in the 1976 horror cult classic SQUIRM from celebrated horror filmmaker Jeff Lieberman (Just Before Dawn, Blue Sunshine). This sought-after creature thriller stars Don Scardino (director, The Incredible Burt Wonderstone, 30 Rock), Patricia Pearcy (Delusion), R.A. Dow  and Jean Sullivan (Escape in the Desert) and features gory make-up effects from Oscar®-winning artist Rick Baker (An American Werewolf in London, Planet of the Apes, The Wolfman).

***Avid fans and collectors please take note: those who order SQUIRM Collector’s Edition from ScreamfactoryDVD.com will receive the exclusive 18”x24” poster featuring the newly commissioned artwork!  These are only available while supplies last.***

The Night Is Crawling With Killers.

When a powerful storm knocks Fly Creek, Georgia’s power lines down onto wet soil, the resulting surge of electricity drives large, bloodthirsty worms to the surface – and then out of their soil-tilling minds! Soon, the townspeople discover that their sleepy fishing village is overrun with worms that burrow right into their skin! Inundated by hundreds of thousands of carnivorous creatures, the terrorized locals race to find the cause of the rampage – before becoming tilled under themselves!

Written and Directed by JEFF LIEBERMAN