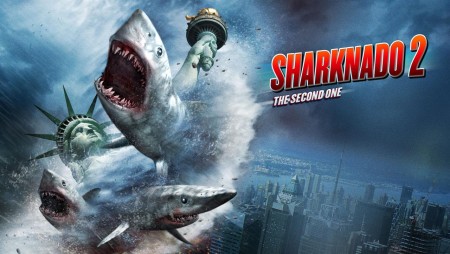 SYNOPSIS:
Fin Shepard, survivor of the legendary Sharknado of LA, returns home to New York City but finds a mega-storm waiting. Once again Fin must risk his life to save his family and friends – and all of New York – from a tornado full of hungry, man-eating sharks ready to devour anyone in their path.

REVIEW:
Sharknado 2: The Second One is an abomination, a horrible piece of dribble that is silly, lazy and just plain god-awful. It never takes itself, its audience or the craft of film making seriously and is often disrespectful and offensive to everyone watching and involved. It is crap, through and through, with forced plot, dialog, acting and effects. Oh, dear, the effects are monumentally foul and stupid. It is the year’s worst film.

Phew, now that we have that out of the way… 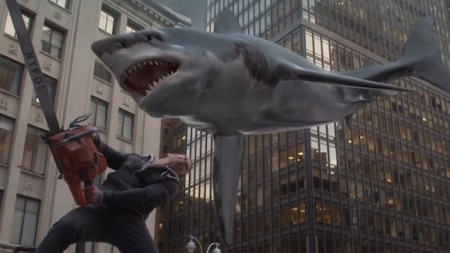 Sharknado 2: The Second One is exactly what the target audience of the continuation of Asylum’s Sharknado are after. It is ridiculous, self aware and single minded. It succeeds on its simple minded brilliance. Ugh. Director Anthony C. Ferrante who directed the first Sharknado and Boo (2005) – and has already been attached, according to IMDb, to Sharknado 3, provides the film with a solid tongue-in-cheek tone and pacing. The film is never too concerned with plot holes and spacial or time issues or inconsistencies in character, location or story. It is about a tornado with sharks in it, pretty simple. The acting, if that is what it is, is dreadful, but seemingly intentionally so. Or, at least they get away with presenting it in such a manner that it does not ever truly matter. The acting, the effects, the story are of little concern, the film only needs to deliver sharks flying around Manhattan skyline, chomping on New Yorkers like they are human sized Sushi burgers. Sharknado 2: The Second One does just that. 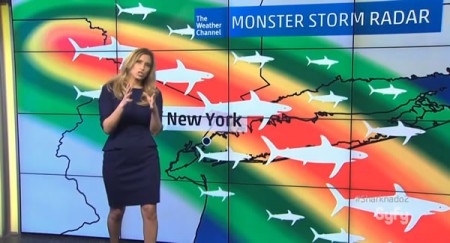 If the story of Sharknado 2: The Second One is of any concern, it follows the further adventures of Fin Shepard (Ian Ziering) and April Wexler (Tara Reid), both from Sharnado (2013), survivors of the LA shark storm who are now flying to New York City to visit Fin’s sister, Ellen Brody (Keri Wuhrer). Before they even land, the plane is swarmed by flying sharks while descending through a storm approaching JFK forcing the plane. Surviving the near-crash landing, Fin must warn his family and all of New York about the pending storm with two massive Sharnados. The story is full of a mix of serious (sorta) characters making up Fin’s family and friends, silly entertaining cameos and ridiculous supporting characters. It calls out to Jaws, Twilight Zone and Alligator. 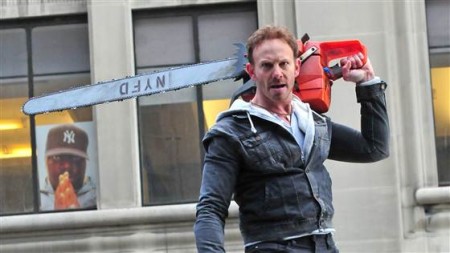 Ian Ziering makes for an endearing hero one again in Sharknado 2: The Second One providing serious frowns and grimaces, awkward caring for friends and family and uneven, un-charismatic stares into the eyes of Tara Reid. Authenticity is never a goal here. It is more about his bravado and over the top speeches rallying the citizens of New York against the onslaught of sharks. It is funny that he is literally the only one in the cast that seems to be giving a crap about the film though. It helps especially since Fin drives the story. He also is now an expert at wielding a giant shark-killing chain saw. That is quite spectacular. 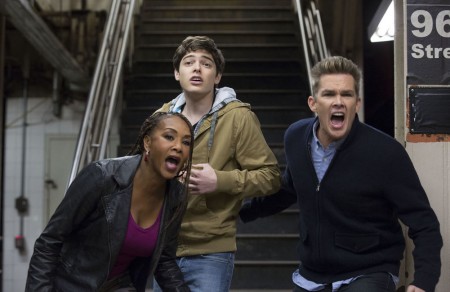 Mark McGrath joins the cast as Fin’s ex-best friend and brother-in-law, Martin Brody – get it? “Martin Brody!” McGrath is a great addition to the franchise and works well off Ziering, making for an effects dynamic duo as they continue to reference themselves throughout the film. The cast is full of fun actors in supporting roles. Kari Wuhrer as Mora, Fin’s sister. Vivica A. Fox as Skye, Fin’s ex girlfriend who still has a crush on the hero. Judd Hurst as Ben, a NY cab driver fighting at their side. Tiffany Shepis is Mora’s friend who goes face-to-face with a hungry shark – one of the few who actually come out of the water. The cameos are fast and furious, a who’s who of E! Network and NBC staples, Kelly Osbourne, Biz Markie, Perez Hilton, Matt Lauer, Kelly Ripa and Billy Ray Cyrus to name just a few. Robert Hayes and Robert Klein get the best of the bunch. 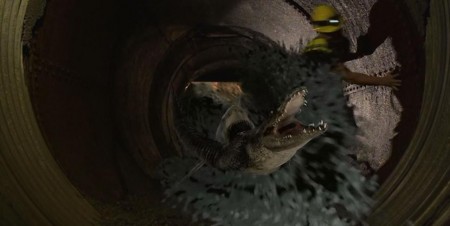 The effects are so terrible but on par for most of what Asylum produces. They are quick, to the point, silly but effective. Again, they deliver what the film promises, sharks in a tornado. They never behave or live like sharks would, but that does not matter. How would they survive anyway, ah, who cares… The CGI blood is stupid and clumsy. The gore is boring, except maybe a hand chomp that is rather funny and a face munch that is satisfying. The film does take a few risks, well, not really, but it does have an inventive hand saw that is more promising than effective. The results are more geared to generate laughs then gasps of horror, for that they succeed, which means tons of implied chomps and bites rather than gory slice-and-dice and decapitations. But, ugh, CGI blood, boo, hiss. 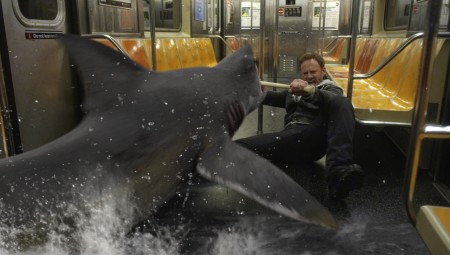 Sharknado 2: The Second One is exactly what it needs to be and is kinda brilliant because of it. It is terrible, really awful, but so funny and silly. For its target audience it is pure gold, a cheesy delight, a goofy masterpiece of camp and nonsense. Nothing should work, but most of it does. It’s jokes are lame and crude, but hilarious in context. It is an acquired taste. Taking it for what it is, what it strives to be, Sharnado 2: The Second One is the top of its form representing the best of what the SyFy and Asylum team have to offer mixing satiric monsters of nature with comedic disaster films. Harmless and goofy, well worth a watch.