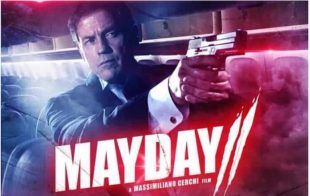 The eagerly anticipated follow up to supernatural thriller Mayday was just announced September 17th and both Tara Reid and Robert LaSardo have officially been added to the film’s growing roster.

SYNOPSIS: Air Marshall Adam Anderson ( Michael Pare) is back on duty. While on a full flight from LA to Italy a strange smoke engulfs the plane and him and all the other passengers pass out. Once he wakes up, he notices that only him and 5 passengers ( Costas Mandylor, Robert LaSardo, Louis Mandylor, Bai Ling, Bishop Stevens) are on board. The rest vanish into thin air. He goes to the cockpit and discovers that it’s on autopilot and there is nobody in the pilot seats. Together with the other 5 passengers they will either collaborate or kill each other to find the truth and the key to their survival