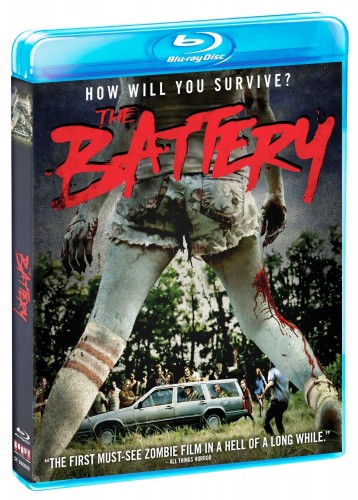 A Film by Jeremy Gardner

One of the Most Celebrated Zombie Horror Movies Hits
Home Entertainment Shelves Everywhere on September 16, 2014

In a world ravaged by the undead, two men must not only survive a zombie apocalyptic mayhem, but also learn to survive each other. Or will they?  On September 16, 2014, SCREAM FACTORY™ will release writer-director Jeremy Gardner’s enthralling zombie-horror drama THE BATTERY on Blu-ray™ and DVD. Featuring a general dose of suspense, character tension and wit, this critically acclaimed movie follows two former baseball players as they traverse the rural back roads of a post-plague New England teeming with the undead, psychological strain and their stark personality differences.

THE BATTERY stars Jeremy Gardner, Adam Cronheim, Niels Boole, Alana O’Brien, Jamie Pantanella, Larry Fessenden and Kelly McQuade. Packed with insightful special bonus content, THE BATTERY is a must have for movie enthusiasts, loyal fans and collectors. The Blu-ray has a suggested retail price of $19.97 and $14.97 for the DVD.

Two former baseball players, Ben (Jeremy Gardner) and Mickey (Adam Cronheim), cut an aimless path across a desolate New England.  They stick to the back roads and forests to steer clear of the shambling corpses that patrol the once bustling cities and towns.  In order to survive, they must overcome the stark differences in each other’s personalities — Ben embraces an increasingly feral, lawless, and nomadic lifestyle, while Mickey is unable to accept the harsh realities of the new world.  Mickey refuses to engage in Ben’s violent games and longs for the creature comforts he once took for granted — a bed, a girl and a safe place to live.  When the men intercept a radio transmission from a seemingly thriving, protected community, Mickey will stop at nothing to find it, even though it is made perfectly clear that he is not welcome.

Written and Directed by Jeremy Gardner