Wizard World Philly for 2014 has come and gone and the Wizard World crew led by Jerry Milani and Jim DeLorenzo put on another outstanding weekend for the fans in the City of Brotherly Love. June 19th thru the 22nd was everything fans of DC Comics, the Marvel Universe, and everything geek and nerd inbetween could ask for. But for me, the weekend was all about meeting Matt Smith and Karen Gillan, better known to the Doctor Who Project as the 11th Doctor and his devoted companion, Amy Pond. 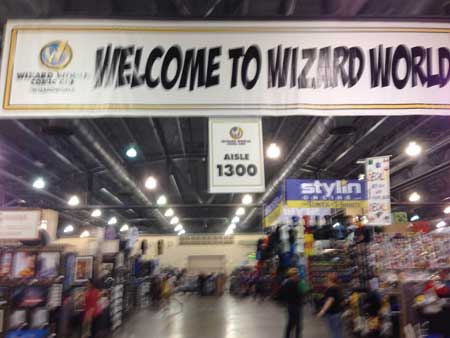 Wizard World weekend actually started for me the night before on Wednesday night at Xfinity Live in the sports complex in Philadelphia. Wizard World hosted an official Launch Party at the sports bar featuring special guests Lou Ferrigno, who at 62 years old is still massive & convincing as the Incredible Hulk that I enjoyed on the boob tube during my youth. Also joining the celebration that night was Michael Rooker who has been a favorite of mine since viewing Henry: Portrait of a Serial Killer.

The VIP section was rocking and the atmosphere was electric as all in attendance anticipated the forthcoming weekend. When talking to the fans and press in attendance, the main topic of conversation was the fact that both Matt Smith & Karen Gillan would be at the event together. When the announcement was made in late May that Matt Smith had joined the Philly convention, social media exploded with the news and I knew right then and there that the convention would have a massive crowd and my conversations at Xfinity Live just strengthened that notion even more.

I made my journey to the Pennsylvania Convention Center on Thursday for the first day of the convention with my 13 year old son, who would be the companion to my Doctor for the entire weekend. Doors opened at 3:00 but with the press credentials I was able to access the floor an hour early and scope out the lay of the land. Thursday was not too crowed and allowed me the experience to speak directly to the artists on hand as well as the vendors and exhibitors. I knew it would be a Doctor Who themed weekend as I saw the TARDIS in 3 separate areas on the convention floor and quite a few of the vendors were selling Doctor Who merchandise. Each year that I have attended the convention a theme has taken over. Last year I fully executed the theme to be Superman with the Man of Steel movie coming out. But instead Doctor Who exploded all over the scene. And for the second year in a row the Doctor Who theme would reign supreme over the weekend. 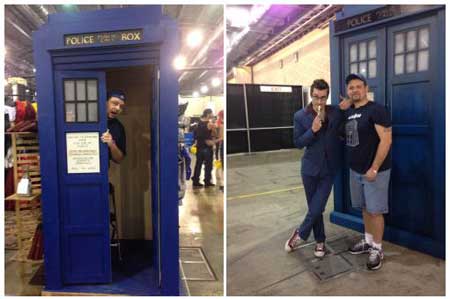 As we made our entrance into the convention on Friday I knew right away that business was about to pick up! The crowd had increased significantly and with that came the arrival of most of the cosplayers that would dominate the weekend. Deadpool was a very popular costume this year and one person dressed as Deadpool but with a twist. He wore the infamous bow tie and fez the 11th Doctor is known for thus becoming Doctor Deadpool! The Batman franchise was also well represented but without
question the number one theme with the cosplayer community was the Doctor Who universe.

Costumes featuring the Doctors from the Peter Davison, Sylvester McCoy, and Christopher Eccleston eras were represented. The Doctors of the Tom Baker, David Tennant, and Matt Smith tenures of the show dominated the floor. Also saw companions represented with the more recent Amy Pond and River Song as well as Brigadier Lethbridge-Stewart which brought back memories of nostalgia. And of course the villains of Doctor Who made their appearances in the cosplay community with Daleks and Weeping Angels making appearances. But the number one costume was without question women dressed as the TARIDS! I could not count how many females wore dresses that were made out to look like the unreliable blue box! Cosplay was front and center on Friday night which also saw more of the celebrities arrive on the scene which made the anticipation for Saturday that much more. 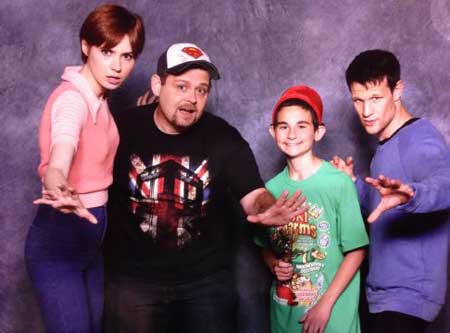 Saturday was the big day! It was the day that Matt Smith & Karen Gillan would be doing their combined photo-op. I fully expected Wizard World to be elbow to elbow with the people I relate to the most, nerd, geeks, and Whovians. I say that with absolute respect as I am proudly one of them! To say the crowd was insane would be an understatement. The convention center was packed from pillar to post.

The photo-op started at 12:50 for the Matt Smith & Karen Gillan session and Matt Smith was doing another solo booking following that photo-op. The lines for these sessions were nuts! After being in line for nearly 2 hours the magical moment had arrived as my son and I proudly had our picture taken for the 11th Doctor & Amy Pond! A moment in time that I shared with my son that I will always treasure.

I even showed Matt & Karen my Weeping Angels tattoo and told them not to blink! Both of them laughed and just topped off my experience of meeting the two of them! The entire experience and the fact the convention floor was so mobbed made the day quite draining and made me really appreciate the fact I was able to enjoy the laid back atmosphere of Thursday and the not quite as crazy Friday that gave me more time to associate with the cosplayers and celebrities on the floor on that evening.
Sunday was the final day of the Wizard World experience for 2014. The crowd was still large but the atmosphere had died down with the departures of Matt & Karen from the scene. It was on this day we did our shopping in which I scored some more Doctor Who merchandise to add to my ever expanding collection. It was also the final chance to talk to the artists that were at the event. As we boarded the speedline to head back to the Garden State we left the Wizard World experience from 2014 behind us but will be reminded of the event with all the new memories we obtained at this incredible event. 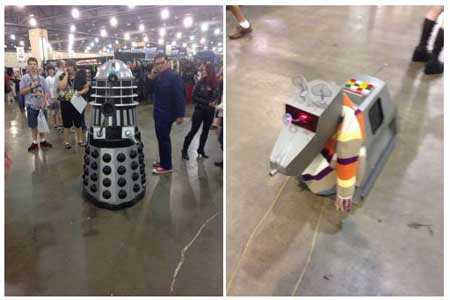 Wizard World has already announced the dates for the 2015 event which will take place on May 7th thru the 10th. What will be the main theme that takes over next year’s event? If Wizard World are able to secure the services of Peter Capaldi then I have no doubt that Doctor Who will make it 3 years in a row that the mad man with the blue box takes over the event just as the Doctor has done the last few years!