Christmas for most means presents, good tidings, and a visit from the Fat Man down your chimney. But for a Whovian like me the Yule celebration since the re-birth of the Doctor Who franchise has meant a new episode of Doctor Who! And with special importance this year as The Time of the Doctor is the swan song of Matt Smith from the role of the Eleventh Doctor. Before I get into the review of the episode let me say that never before has Doctor Who been such a global phenomenon as the show has now become, and Matt Smith’s portrayal as the mad man traveling thru space and time with a blue box cannot over-stated as the reason for the explosion. 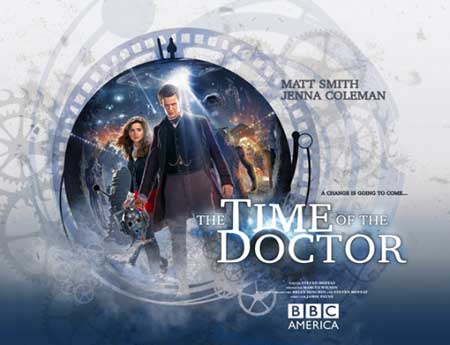 Yes all of us Doctor Who fans from way back will always have a place in our hearts for the 4th Doctor, played magnificently by Tom Baker and many fans of the re-booted show will always say that David Tennant’s 10th Doctor is the best, and those 2 are in my top three favorite Doctor’s of all time. However, as when David stepped into the role I said nobody would ever top what Tom Baker did with the role, and he did just that.

And when David stepped aside I never thought that Matt Smith would ever be able to fill the enormous shows that David left for him, but he did that and so much more. Matt Smith is now my favorite Doctor of all time and it was with great sadness that I see him move on from the role, but with the outstanding selection of Peter Capaldi as the 12th Doctor I do not doubt for one second he will make the role his own and deliver us another awesome incarnation of the Doctor.

The Time of the Doctor, although not my favorite Christmas episode of the show (reserved for a Christmas Carol, which to me is the best version of that grand story ever done) was an emotional one, as Whovians like me knew going in that the 11th Doctor would regenerate during the course of the episode. What it did do was tie up all the loose ends of the story arcs featuring the 11th Doctor, dating back to his very first episode. The cracks in the universe, the Silence, the fall of the eleventh of the fields of Trenzalore, and the question that may never be answered, Doctor Who?

It was a triumphant ending to the 11th with all the villains of the Matt Smith era involved, from the emotionless Cyberman, the frightening Weeping Angels, the Silence that hide in the shadows, and of course the baddest of all bad, the ever so evil Daleks. It also had the quintessential British humor that drives the show with the Doctor meeting Clara Oswald’s family and giving them more of a look than what he had anticipated as he was naked but had a clothes projection on but only Clara could see the projection! Why was he naked you ask? Because he was going to church! But of course! Only the Doctor! Eventually the good ol’ Doc and Clara land on planet and end up in a town called Christmas that has a truth field surrounding it so it prevents all that inhabit it from telling a lie.

It is there that the Doctor investigates a message that is coming thru the crack in the universe that has the planet surrounded by all the villains also trying to decipher the message. It is here that this episode ties into the previous Day of the Doctor, as the 11th figures out that the Time Lords are using the crack in the universe to call out to the Doctor from the other universe they are trapped in. The Doctor also finds out the planet they are on is known as Trenzalore, where it was prophesized he would meet his end, tying to the episode the Name of the Doctor. The Doctor sends Clara home without telling her but when the TARDIS comes back for the Doctor, Clara managed to hold on outside the ship and as a result the TARDIS had to increase the shields to protect her from the time vortex, so although the trip back for her was instant, for the Doctor it took 300 years for the blue box to return to him.

It is here that the Doctor reveals although he is known as the 11th Doctor he is in his final regeneration due to the 10th Doctor using an additional regeneration in the episode the Journey’s End and the version of the Doctor known as the War Doctor (John Hurt) that fought during the Time War with the Daleks, so although he known as the 11th Doctor, he is technically the 13th which tied up that loose end that Whovians were wondering about. So when this version dies, and he is about to due to old age, that will be the end of the Doctor.

Clara, the impossible girl, is the one that begs the Time Lords thru the crack in the universe to save the Doctor from his demise as the 11th walks tall for his final encounter with the Daleks. The Time Lords decide to close the crack in the universe to prevent the Time War from starting again but not before delivering a new regeneration cycle to the Doctor so that he does not die and as a result, changing his future and the prophecy to a degree. Yes the Doctor will not die, but now the new regeneration cycle will start and the 11th will indeed fall on the fields of Trenzalore.

After his defeat of the Daleks, the new regeneration cycle reboots the Doctor temporarily to his younger 11th version until the regeneration has been completed. And with that we get the emotional, perfectly scripted and acted farewell to the part from Matt Smith, and a surprise appearance from Amy Pond, his previous companion!

The last 5 minutes of this episode are brilliant, with Matt Smith taking off the bow tie and dropping it to the floor of the TARDIS, while at the same time saying good bye to his previous and current companions. Kudos to Stephen Moffet for allowing Matt Smith these 5 minutes to say good bye to the franchise he was responsible for making a world wide following. Never before has Doctor Who been this popular, especially in the United States, and these 5 minutes rank up there as one of the best moments from a show that spans 50 years!

The Doctor then regenerates into his new version, Peter Capaldi, who comments on his new kidneys and then asks Clara if she knows how to fly the TARDIS, as with all new versions of the Doctor, upon regeneration he is not ‘done yet’ and can be very confused until he regains his bearings. Good bye Matt Smith and hello Peter Capaldi. Thank you Matt Smith for letting us know that bow ties are cool and that wearing a fez is also, indeed, cool. Now we play the waiting game until the Autumn of 2014 for the new adventures of the 12th Doctor who will have his own quirks and personality that make the mad man in the blue box such an incredible science fiction character!