During the 50th anniversary celebration of Doctor Who the BBC along with BBC America celebrated the franchise by each month delivering a classic episode featuring each of the 11 Doctors. The First Doctor was featured in the episode The Aztecs which was an absolute treat for me because my memories of the First Doctor were limited to limited archived footage and having only seen a full episode one other time, his debut in the very first episode An Unearthly Child, which the BBC has rebroadcast a few times. Quite a bit of the First Doctor’s adventures have been lost to the memories of the children of Britain who watched them when they aired as the BBC back then to save on funds taped over these episodes and other episodes were just simply lost over time from not being collected properly.

An Adventure in Time and Space was an additional celebration for the series as the BBC commissioned a movie about the creation of the show and the casting of William Hartnell as the First Doctor. In this movie, which was shown to the BBC America audience in November 2013, the man
cast to be the one and only William Hartnell was David Bradley who is best known by current standards as Argus Filch, the caretaker of Hogwarts Wizarding School in the Harry Potter movie franchise. But he also starred in the Series 7 episode of the Doctor Who series ‘Dinosaurs on a Spaceship’ as the advisory of the 11th Doctor.

The movie begins in 1966 with William Hartnell (David Bradley) in the dressing room at the BBC. He is in a foul and somber mood. He is called to the set to film his last moments as the Doctor. The move then fades back to 1963 when a BBC executive is given the task to create a new show for the network.

An idea is developed for a science fiction that that will also teach the children at home at the same time. And with that the character of the Doctor is developed. I should mention that the executive is played by Brian Cox, who has been in the X-Men franchise as William Stryker and also starred as King Agamemnon in the movie Troy. Some long time fans may also remember him from the under-rated movie Manhunter in which he was the first actor to tackle the role of Hannible Lecter. He is also at top form in this movie as the BBC executive but what really drives this movie is the performance by David Bradley who captures the raw emotions of a seasoned, serious actor (Hartnell) who must come to grips with the fact he is asked to do this strange new show Doctor Who that he does not understand yet over time cannot come to terms with the fact he will be asked to leave the role that made him more famous than any other role he had.

The move gives all the back story of the development of the show, all the executive stories you never hear about. It delivers the meat and bones of the story within a story of delivering this show to the 1960s British audience and the struggles, problems, brick walls, and turmoil this strange little show came up against just to be delivered onto the airwaves of the BBC. The movie also deals with those same struggles that William Hartnell himself had against the show and how the executive, producers, and set workers all had to do to ensure that Hartnell was comfortable on the set, satisfied with the scripts, and more importantly the set designs met his high standards. Without William Hartnell fighting so hard for the interior of the TARDIS to meet those standards he wanted, the show may have never obtained the audience it ended up having. Yes, the man William Hartnell was a complicated, and quite frankly, difficult actor to deal with. But at the same time David Bradley craftly is able to also deliver a side of Hartnell that you cannot help but feel sorry for the man and at time agree with his harsh opinions.

The show is almost cancelled because the 1st episode had the bad luck of airing the day after the Kennedy assassination so the numbers are weak. The show is saved after the 2nd episode is aired which features what would become the Doctor’s most legendary advisories, the Daleks which prove to be quite popular and the show soars in the ratings from there and never looks back. As the show continues to grow in numbers and strengthen in the consciences of the British audience the health of William Hartnell begins to fail and the man starts to forget his lines forcing scenes to be re-shot, which the show, although popular but still on a tight budget, can not afford.

It is there the decision is made to replace the man who brought the Doctor to life, the man who had to be talked into taking the role and now had grown into the role so much that it helped him re-connect with his grandchildren. He has fully embraced the role at the time he is informed he will be replaced in the role that made him more famous than any role he ever had. He desperately does not want to leave the show but accept the fact and passes the torch to the Second Doctor, Patrick Troughton. The movie ends with William Hartnell looking across the interior of the TARDIS and seeing Matt Smith, the Eleventh Doctor, a nice moment that allows ‘the character’ of William Hartnell to come full circle and fully realize his legacy is intact, something the real William Hartnell may have never realized before he passed away. 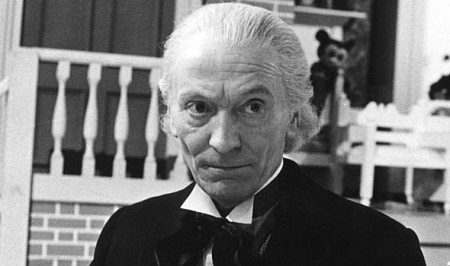 Without William Hartnell grudgingly but eventually fully embracing the role of the mad man with a stolen blue box the show may have never found the audience it did and become the longest running Science Fiction show in the history of television. Each of the Doctors that followed him owe their legacy to the man that started it all, and An Adventure of Time and Space is the story behind the story.