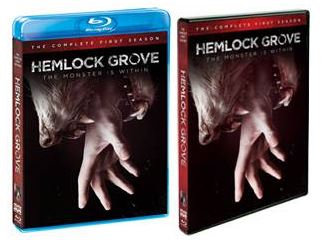 Pack your bags and say your prayers — you’re on your way to Hemlock Grove. From executive producer Eli Roth, the Primetime-Emmy© nominated Netflix Original Series Hemlock Grove: The Complete First Season arrives on Blu-ray and DVD October 7th, 2014 from Scream Factory. Featuring  all 13 exhilarating episodes from the shocking first season, the three disc set also includes all-new bonus features not available on Netflix including six all new vignettes. Horror aficionados should note that additional bonus features will be announced as excitement builds for this release, and fans can pre-order their copy now at ShoutFactory.com.

In a small Pennsylvania town, something evil has come in search of prey. But who is the true monster in Hemlock Grove? The brutal slaying of a teenage girl sends the townspeople of Hemlock Grove into a desperate search to find her killer. But this sleepy community soon finds itself living a nightmare as secrets and rumors threaten to drive them all down a dark path as they struggle to uncover the truth. As they hunt for a monster among them, rumors mount and many of the eccentric residents become suspects, from the newly-arrived Gypsy family to the wealthy Godfrey clan. In the twisted world of Hemlock Grove, everyone hides a dark secret.

“Dysfunctional In Every Way,”

“Anatomy of a Kill,

“The Rust Beneath the Surface”

“It Hurts So Good”