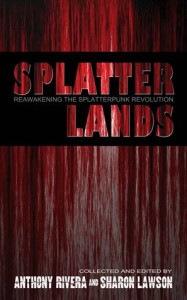 A collection of thirteen tales with a common theme surrounding graphic, gory and often violent depiction of terror that knows no boundaries:

Heirloom By Michael Laimo-A woman’s obsession with firearms is handed down from generation to generation.

Violence for Fun and Profit By Gregory L. Norris-Revenge may spawn unto the vulnerable in the unlikeliest of places.

Amputations in the Key of D By Jack Maddox-Daniel Murphy aka Mr. Murder is a Goth metal musician that is inspired from the most surreal of finalities.

House Sitting By Ray Garton- Darlene uncovers a gruesome secret about her neighbours that forever influences her perspective.

Empty By A.A. Garrison-A satirical look at the parallel universe and one woman’s determination to save her husband.

Dis By Michelle Garber-Tony, a therapist grapples with the fine line between fantasy and reality.

Dwellers By Paul M. Collrin-Richmond and Scrye get more than they bargain for in a desolate, desert ritual.

Party Guests By Chad Stroup- 1st person ramblings of a captor confined in his apartment with his prisoners.

The Viscera of Worship By Allen Grifn- A journey to learn the epitome of Leviathan is filled with bloodshed and chaos.

The Defiled By Christine Morgan- A group of Vikings learn the true meaning of Kharma.

The Artist By James S. Dorr- A butcher with a flair for meat sculptures shows his wife the true meaning of art.

A Letter to my Ex By J. Michael Major-Revenge is a dish best served cold through emails.

The Devil Rides Shotgun By Eric Del Carlo-A desperate detective summons a demon to assist in an investigation gone awry.

With a self-professed moniker of ‘Reawakening The Splatterpunk Revolution’ Grey Matter Press delivers with a delightfully disturbing anthology that will render you speechless. Splatterlands is precisely like the drive by train wreck that you know you should like away but are mesmerized into looking on in disbelief and wonder.

I’ve never really been one for labels for the sake of labels or trendy catch phrases yet the term splatterpunk seems most fitting in depicting extreme levels of blood, guts and gore. Be forewarned these pages are clearly not for the faint of heart.

The vivid imagery and descriptions will haunt the psyche long after consuming the final words within.

A formidable array of talented authors such as Garton, Norris, Garber and Morgan, each lures the imagination with a spine tingling, nerve searing splendor. On a very primal, innate level we’re engaged to discover what happens next, ripping through each unsettling tale after the next.

In most circles where censorship is virtually abolished the fine folks at Grey Matter Press may be limiting their potential in mass marketing. Granted there won’t be many church goers flocking to pick up a copy of Splatterlands yet one cannot deny that some retailers may be uncomfortable promoting such extreme, graphic content. Having stated that I can honestly say as a fan of horror for some thirty plus years I have never read anything quite like this anthology and regret not a moment of it.

The protagonists and antagonists as spawned from each author are not your conventional heroes and villains. A lead in some cases may be a young woman penned from a male writer or a little boy or even a Viking Clansman in one case. The authors break free of the mold and create a fascinating environment for each story really before it even begins. The end result fixates the audience even unto the fickle at heart, luring our subconscious deeper into the abyss of the depraved.

Perhaps most admirably is the compact, brief word count each of the writers has to contend with. A great deal has to be covered in such a limited space. The short story is a lost art form unto itself. This collection truly separates the masters from the novices. Grey Matter Press manages to not only resurrect the dying art form of short story telling but packs a powerful wallop unto a brand new generation of fans.

I admire editors Rivera and Lawson for taking on the seemingly difficult and consuming task of selecting these tales; An undeniable blend of commercial and literary fiction all with an underlining theme of darkness that lurks within. We’ve all entertained fantasies of vengeance, wraith and revenge. Rather than acting upon these fantasies we can take comfort in actualization of an inconceivable realm where our darkest impulses are realized. In essence the fear factor in these stories is the fear of loss of control. It’s what separates us from the animal kingdom. Other predominant horror related themes in our contemporary literature such as zombies, ghosts, damnation, evil possession, the supernatural, etc. remain detached from our conscious mind. Yet bona fide terror comes from within and mankind’s potential for sociopathic, grisly murder. Grey Matter has a firm grasp on what terrifies, unsettles and at very least nauseates us and tweaks it to the next level.

Perhaps the easiest gauge to rate a novel or collection of stories is to put oneself in the position of the constant consumer and ask would I buy this off the shelf? Without hesitation: absolutely. Grey Matter Press has become my latest go to for creepy all out horror.