The NOISE Festival 2014 ‘Call For Entries’ is drawing to a close. Submissions need to be in by 6th July 2014 to have the chance of being reviewed by cult horror writer, director and producer, Clive Barker. The creator of classic horror film Hellraiser and an executive producer for Candyman, is set to rate up and coming film/moving image entries made to the arts website NOISEfestival.com. 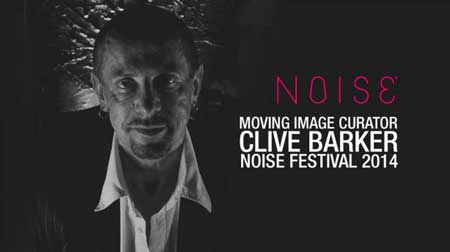 Entering NOISE Festival 2014 is free and open to all ages via NOISEfestival.com.

NOISE Festival gives talented emerging creatives a positive, debt-free route into the industry. The NOISE charity ethos is that reward and recognition should be based on talent, to break down the barriers of postcodes, socio-economic status and lack of connections that often prove a stumbling block for the next generation of aspiring creatives. Over the Summer, the Curators will be short-listing the entries. The best, undiscovered creatives are then promoted at the NOISE Festival 2014 showcase in the Autumn, at nationwide exhibitions, through media coverage, and in some cases professional/amateur collaborations, paid work placements or personal mentorship with the Curators or other leading creative companies.

Dubbed “the future of horror” by Stephen King, Clive Barker came to prominence in the 1980s as a writer of horror fiction. Clive was a screenwriter for films Rawhead Rex and Underworld, having broken through in the genre as author of The Books of Blood published in 1984, a series of mythic horror novels. The series turned Clive towards Hollywood, and went on to define the Liverpool born writer’s directed films, Hellraiser, Nightbreed, and Lord of Illusions. Bernard Rose’s Candyman, one of the most respected horror films of the era, was adapted from the Books of Blood title “The Forbidden”, with Barker an ongoing adviser and Executive Producer for the seminal film.
Clive also set up and works alongside production company Midnight Picture Show, was Executive Producer for the Oscar-winning film Gods and Monsters, and has designed video games including the recent title, Jericho. A full time Los Angeles resident, Barker has continued to write and illustrate his award-winning Abarat novel series over the last decade.
The NOISE Festival Charity CEO, Denise Proctor, adds,

“We are thrilled to have such inspirational role-models confirmed for the 2014 Festival. All curators had a real impact in their creative sectors. They are industry leaders, truly sympathetic to up and coming artists looking for their first break; and honest enough to share the ups and downs of their own careers. NOISE provides a real opportunity for emerging creatives, on the firm belief that success should be based on raw talent – not background, education, postcode, or family contacts.”

Throughout 2014, a monthly interactive webinar with a Curator is held for 8 festival entrants, and also broadcast live online. Running on a Q & A basis, the webinars offer further insight into making a success in the creative industries and act as a fantastic tool for advice from those that have made it in their fields.