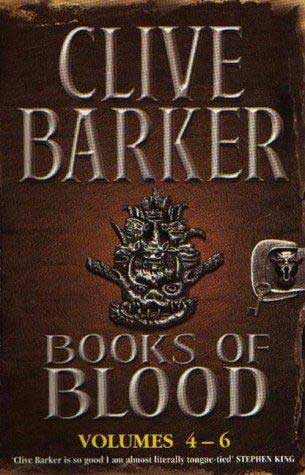 The Forbidden is one of the stand-out tales from Barker’s acclaimed Books of Blood series: a genre-redefining collection that prompted the horror high-priest Stephen King to proclaim breathlessly that ‘Clive Barker is so good I am almost literally tongue-tied.’ (For any horror fan not to have read these gory, otherworldly fables is a like a church-goer eschewing the New Testament.)

It’s the story that eventually morphed into celluloid slasher Candyman. Yet there are many differences with its big-screen sibling. It’s set, not in Chicago, but in a bleak inner-city housing estate in the UK (the equivalent of ‘the Projects’ in the US). Barker sets the tone by describing at length an architectural dream that through neglect and lawlessness, has slowly turned into a nightmare. It’s a place where ‘…lamps had been shattered and back-yard fences overthrown; cars whose wheels and engines had been removed and chassis then burned…’

The estate is awash with graffiti. Indeed, it’s the graffiti that attracts Helen to this urban abomination. She’s a photographer who’s studying the subject for a dissertation. Alas, like every tragic heroine, her decision to enter the estate is the first step on a journey that will ultimately consign her to a terrible fate. Helen finds herself fascinated by the anti-social aesthetics, and her obsession brings her into contact with an estate resident, a young mother, Ann-Marie, who tells her of further spray-painted attractions in some of the empty derelict flats. Here she finds a mural (replicated verbatim in the film) which seems to stand outside the usual mix of obscenities and signatures: ‘Using the door…as a mouth, the artists has sprayed a single, vast head on to the stripped plaster.’ Accompanied by the enigmatic epigram sweets to the sweet, the mural leads Helen to further contact with the natives, who tell of a dark history of murders on the estate. Not only are these murders unsolved, but they’re distinguished by dint of their particularly visceral nature. Committed, according to estate lore, by a man ‘with a hook, like Jack the Ripper.’ Sound familiar?

And so Helen is drawn inexorably into a world of urban legend, made horribly real when Ann-Marie’s young son is found with his throat slit. Shortly after, we encounter the eldritch entity that will evolve into the character brilliantly portrayed by Tony Todd: ‘He was bright to the point of gaudiness: his flesh a waxy yellow, his thin lips pale blue, his wild eyes glittering as if their irises were set with rubies.’ In the gripping finale (spoiler alert here) Helen is lured into a wooden pyre that has been constructed by the residents. Here, in an eerie finale that’s a little reminiscent of The Wicker Man, she’s consumed by the flames whilst reclined in the fatal embrace of the Candyman. The lesson is clear: next time you’re wandering around a derelict flat and you see a demonic face leering at you from the walls, make immediately for the exit and don’t look back.