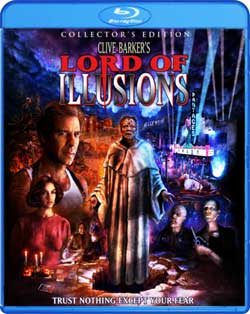 During a routine case in L.A., NY private investigator Harry D’Amour stumbles over members of a fanatic cult, who are waiting for the resurrection of their leader Nix. 13 years ago, Nix was calmed down by his best trainee Swann. In the meantime Swann is advanced to a popular illusionist like David Copperfield and is married to the charming Dorothea. She hires D’Amour to protect Swann against the evil cult members. A short time later Swann is killed by one of his own tricks and the occurrences are turning over, and it crackles between Dorothea and D’Amour.

Clive Barker hit the ground sprinting when his first volume of “Books of Blood” was released in 1984, winning several fantasy awards and being lauded by maestro Stephen King as “the future of horror.” His poetically repulsive, often perverse modern day morality fables made him an overnight sensation in the literary realm of the macabre. Thirty years later he’s risen to living legend status, and unlike many of his writing brethren has proven himself a resourceful film maker as well. No offense, Mr. King.

Following closely behind Scream Factory’s brilliantly packaged director’s cut of 1990’s “Nightbreed” and hitting shelves next month is “Lord of Illusions,” based upon one of the better stories of the collection, The Last Illusion, from Volume Six. Introducing signature protagonist detective Harry D’Amour and embracing favored themes of resurrection and magic, it was met at theaters with marginal critical praise and small houses. Let’s face it, friends. The handful of years preceding the jumpstart to the genre that “Scream” provided were lean times for us indeed.

Beginning with a prologue set at a remote compound in the Mojave Desert, we are introduced to enigmatic cult leader Nix as he and his disciples are preparing to sacrifice an abducted little girl to. . . something. The dark forces from which he gathers his powers are vaguely presented throughout, but no doubt is left that anyone working in their services is not a good guy. The late actor Daniel von Bargen, who committed suicide in 2012 after years of battling diabetes, will be remembered for a cornucopia of outstanding supporting roles, from “The Faculty” to the murderous sheriff of “O Brother, Where Art Thou?” He shines his brightest here as Nix and carries the lengthy opening. 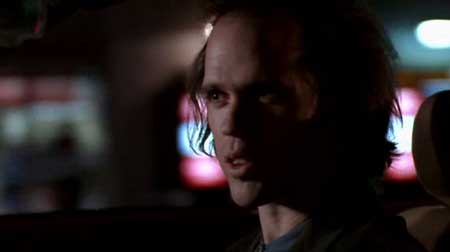 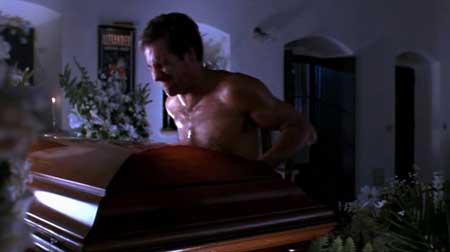 No slouch in the performance department himself is the under appreciated Kevin J. O’Connor (“Deep Rising”, Igor of “Van Helsing”), portraying Nix’s recently estranged protégé Philip Swann. Accompanied by a band of former sect members, he returns to save the girl and stop the ritual. They are successful (of course they are, it’s a prologue) in the campaign, but not before Nix can pass some of his sorcery on to Swann in an effort to seduce him back to the fold. This results in one of the best visual sequences of the enterprise, which is high praise considering “Illusions” is wall-to-wall great (mostly, more on that in a minute) effects.

Thirteen years later, D’Amour (Scott Bakula, between “Quantum Leap” and “Star Trek: Enterprise” gigs) travels from New York to Los Angeles on a routine insurance fraud claim. While pursuing the suspect, he stumbles upon Nix acolyte Butterfield (Barry Del Sherman) turning one of Swann’s fellow betrayers into a human knife rack. Before breathing his last, the gentleman gives the private eye an impromptu Tarot reading, warning of death and the coming of “The Puritan.”

The following day, our hung over hero is contacted by Swann’s wife Dorothea, played by future “X-Men” alum Famke Janssen.  Since his days of chanting in basements, hubby has become a household name as an illusionist, hiding the real magic behind his tricks.  He fears his previous mentor is returning as well upon hearing of the past friend’s demise, prompting Dorothea to hire D’Amour to find out if they are in any danger.  The investigation hits a wall instantly, as a new illusion fails during his final L.A. routine, resulting in Swann skewered onstage with swords while the unaware sold-out crowd watches. 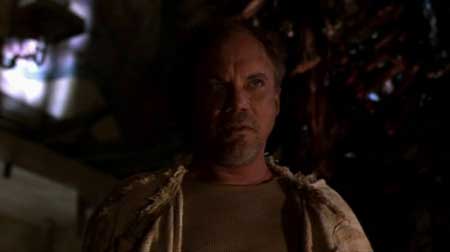 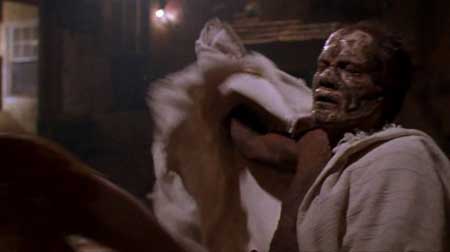 “Illusions” slips into standard potboiler mode from that point, as D’Amour refuses to return to the Big Apple, obsessed with uncovering the many secrets he knows have been hidden from him by Dorothea. Plot wise, there are no real surprises that anyone of standard intelligence wouldn’t have previously deduced leading into the latter half, but we all know when it comes to Barker’s screen work that the fun is in the “we have such sights to show you” aspect of the endeavor. His direction, growing more assured with each picture, falls just short of replicating the film noir vibe he was trying to achieve. Regardless, this remains one of his most technically impressive works to date.

One bit however, involving a geometrical specter wreaking havoc throughout the Swann residence, can’t help but feel downright dated and silly by current standards. Utilizing what I refer to as “Lawnmower Man” computer-generated graphics, it’s a standout eyesore amongst the organic grotesquerie that surrounds it.

Though the same accusations of studio tampering have been made, this isn’t nearly as retooled as the “Nightbreed” director’s cut was earlier this year. The added footage, with the exception of a tame sex scene employing soft jazz of the Playboy Channel variety, is enlightening and provides added insight into character motivations that were originally murky. One gorgeously hideous creature, serving no real purpose other than to make hairs stand on end, is awkwardly tacked on to the caboose of a nightmare, but appreciated for its inclusion nonetheless.

I know a handful of so-called Barker fans who rave about his earlier works for contemplative hours, but have never laid eyes upon the balls-out spectacle that is “Lord of Illusions.” For shame. Certainly flawed, but his obsessive adoration of monsters and mysticism prevails, marking this as another must-see for the true aficionados.

At the very least, it’ll keep you occupied until his announced remake of “Hellraiser” is in the can.