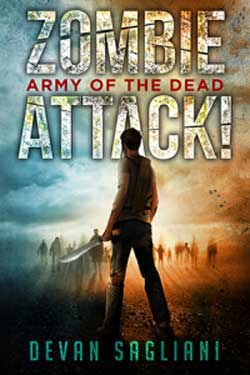 Just when a glimmer of hope seems to illuminate in restoring some normal society, Xander MacNamara finds himself engulfed in turmoil once again. Happily married to the love of his life Felicity Jane and adapting to his newfound military rank in Freedom Town life is good. Little does he know his new found comfort is merely the calm before the storm. There appears to be some deception in the ranks.  A fellow actor has taken a shine to Felicity Jane that doesn’t sit too well with Xander. His actions and reactions cause an impromptu court marshalling and banishment from Freedom Town. While being shipped to another base a mysterious assailant named Sonya appears and breaks him and Felicity Jane free of their shackles. Now officially on the lamb, danger lurks at every corner as he learns there is a bounty on his head. With obstacles and adversity around every corner, Xander and company vie to stay alive before ending up in the clutches of his former nemesis John who has a sinister plot to unleash a genetically altered legion of super zombies. Will Xander be able to reunite with his brother Moto and salvage civilization with the cure or will their efforts ultimately succumb to the Army of The Dead?

Devan Sagliani’s latest zombie adventure is a ravenous read from paragraph one until the exciting conclusion. Army of The Dead is a proven compelling stand-alone novel for readers with no prior exposure to its predecessor Rise of the Horde. Naturally one would be best recommended to ingest the first edition but never fear, the content packs a walloping impact into the psyche making this novel a certifiable adventure in a tremendous market.

Consistency in rising tension between reprised, adoring characters as well as newly introduced is most definitely noteworthy. Our sense of relentless suspense is enhanced from one act to the next as we ponder the fate of our protagonists. A refreshing change of pace is constantly thrown into the mix as we salivate over what could possibly happen next.

Inner monologue of Xander showcases emotion nailing the mandate of any struggling author to show more and tell less. We learn what makes our hero tick. For better or worse his insecurities and fallacies come through somehow making him more human, three dimensional. From a reading perspective we get behind Xander, empathising with his plight and on an almost subconscious level cheer him on through each misadventure.

The dialogue is executed with pristine clarity. Author Sagliani does a tremendous job of telling a great deal of the story through active communication. We’re privy to a fair amount of back drop and exposition of the tale and description through simple talking. No easy feat, we’re engaged in the here and now with what’s going on beckoning our imaginations into crystal clear imagery.

While being labelled by some as a ‘Young Adult’ novel or action adventure, Zombie Attack 2: Army of The Dead cannot be so easily filed in my opinion. The grisly details of gore and consumption will make even the most cynical of horror readers wince while ravaging page after page. Whether a diehard zombie enthusiast or if you’re relatively new to the subtext, suffice to say there is a little something for everyone here.

It’s been an esteemed honour to witness this author mature and flourish with each release. From The Rising Dead to Undead L.A. to Rise of The Horde and now Army of The Dead Sagliani makes the conception of a compelling tale appear effortless. His sense of comedic relief interwoven with rising tension, relatable characters and plot development is the stuff of a veteran story teller that resonates among his audience long after the final chapter.

For a limited time, this week only Zombie Attack Rise of The Horde can be purchased through Amazon Kindle for a mere .99 cents. I can’t think of a better way to embark upon this thrilling journey.