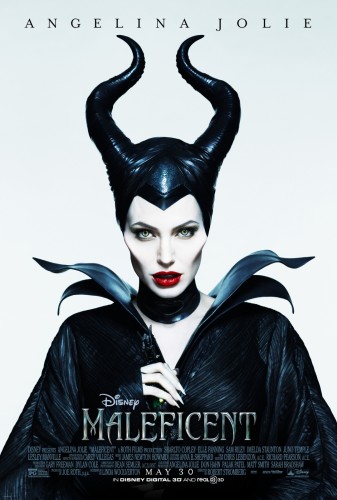 SYNOPSIS:
When betrayed and cast aside by her true love who is corrupted by greed and power, the fairy queen Maleficent returns years later to set her vengeance and revenge upon his new born child, Aurora, by placing a horrible curse upon the princess. Following the child into hiding, Maleficent grows attached to the innocent becoming remorseful as Aurora approaches her 16th birthday, only to find it is too late to stop what she started years ago.

REVIEW:
Sleeping Beauty is one of Disney’s highest profile and earliest princess characters with her story’s villain, Maleficent, aging into an icon of animated villainy, often reaching the top of cinema’s long list of movie villains fighting Darth Vader for the top spot. With Maleficent (2014), Disney has its 11 writers (including Linda Woolverton and Charles Perrault) and director Robert Stromberg re-imagine the story from the perspective of the vengeful fairy queen. In a stroke of genius, Angelina Jolie is cast as the lead striking a familiar and iconic figure. The film is bursting with lush visuals and imagination while its script is a convoluted, contrived, boring mess. The film is insultingly bad. While the film succeeds from time to time in entertaining vignettes, the overall story is alternately, seemingly at random, bloated or stripped bare, often overly relying on voice over narration spelling out the story instead of reinforcing its meaning and visuals with emotions, impact and conflict. Outside of Jolie, who is marvelous as Maleficent, the rest of the cast is a disaster with Shartlo Copley, usually a favorite around these parts, excruciatingly dull and Juno Temple criminally miscast and underused. Shamefully, none of this matters too terribly much as the film will likely reach and entertain its target audience with high marks and innocent gasps of joy as it provides a touching introspective glimpse into the fairly queen behind the villain from within the core of the film’s tone and message.

Minor Spoilers: Opening with an overlong look into the history of its title character, Maleficent assaults its audience with a parade of stunning visual landscapes and fantasy characters as a young fairy grows into the queen and protector of the land as they keep out the humans. However, one young boy makes his way into their world. The young orphan child named Stefan captures young Maleficent’s heart and they become friends. Over time, love blossoms. As they grow older and Stefan is further seduced by the riches and kingdom of the human world, the two slowly grow apart until years pass between visits. Maleficent is crushed and forever changed when Stefan betrays her trust…and love…by taking her wings, crippling her and awaking an vengeful hatred for Stefan and all mankind. The film then catches up with its source material as Stefan has become King with a new born child. Maleficent catches wind of the ceremony arriving to cast her curse upon the innocent offspring. As the child grows, Maleficent keeps a watchful eye on the child and slowly becomes attached to her beauty, innocents and charm. It is here the film shows it fullest promise and potential with multiple entertaining and touching scenes as Maleficent begins to recapture her own heart and hope. When she realizes that the curse is set to take form, sending Aurora into an eternal sleep she fights to prevent it and later reverse it – all the while remaining the villain in the eyes of the humans.

Maleficent, if nothing else, is a pure eye candy. The fairy world is rich in color, vast in scope and plentiful in creatures, character and imagination. Much of what works in Maleficent lies within the fantasy landscapes. It is quite beautiful and breathtaking. Maleficent herself, even when she is at her worst, is equally stunning and captivating. The realization of a winged Maleficent soaring through the fairy hills and valleys and into the skies above is wondrous and enchanting. But unfortunately it is just as hollow. All the pieces and colors are in place but the heart is missing. There are glimpses but the construction of the scenes and the forced narration strip it of its own identity. There is very little sense of how it all fits together or how it relates directly to Maleficent is loosely established and taken for granted in favor of other plot points that also misfire. The voice over struggles to tell us what it all means to Maleficent but the narrative itself never reinforces it except, maybe, for one brief initial scene that introduces the young Maleficent awakening out of her tree-lined, cocoon-like bed establishing her connection to the world around her.

The main reason to see Maleficent is Angelina Jolie as the fairy Queen. Visually, she seems born to play the role and is undeniably extraordinary. She effortless portrays Maleficent as the heroic, tragic, villain. She is menacing and frightening when needed and heartfelt and heartbroken as well. She is motherly. She is vengeful. She is spiteful. She is funny. She is all these things and more creating a fully realized three dimensional character born out of the animated version that was little more than simply the villain. Her interactions with the young Aurora who is innocent of her villainy, who grows to love her unconditionally referring to Maleficent as her fairy godmother, are the highlights of the film. Jolie utters the line “I hate you!” to the wide-eyed baby princess as if it were a term of endearment full of warmth and unrealized love. It is amazing and the film could have used a lot more of this approach. There is little doubt THE reason to see Maleficent is Angelina Jolie. 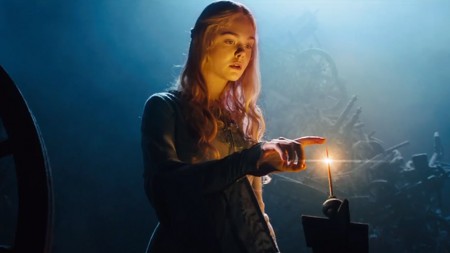 Shockingly, the rest of the cast is less fortunate. Ellie Fanning is a terrific, beautiful young actress but is no match for her animated counterpart from 1959. Her best scenes are when she is unconscious, floating around behind Maleficent and her feather companion. Shartlo Copley is horribly miscast and underused as Stefan, the squire turned King. There is no chemistry between Copely and Jolie which destroys much of the motivation leading up to the tragedy. The talented South African actor makes the most out of a few keys scenes that reveal what the casting director had likely intended (the scene where he is conflicted by his own betrayal and another where he is facing the loss of his newborn child), but the remainder of the film sweeps him aside without much care to motivation and emotion. The three fairies guarding the princess as she grows to sixteen (Flittle, Knotgrass and Thistletwit) are likely to entertain most audiences but are carelessly, clumsily offered as comedic relief instead of utilizing the actresses considerable talents: Lelsey Manville, Imelda Staunton and Juno Temple. Sam Riley fares a little better as Maleficent’s feathered friend Diaval showing compassion and loyalty. 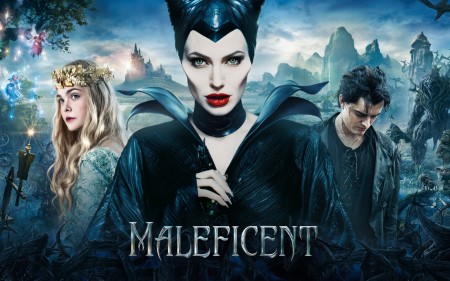 Maleficent, for all its beauty and casting, is disastrously boring. While it succeeds in providing passion, heart and humanity to its lead, the film’s villain, it forgets to do the same with the story itself and the world it inhabits. It has no soul. It struggles with motivations and finds itself forcing the source material’s outcome and story around the fleshed out Maleficent character. The passion behind many of the narrative’s key sequences are far too broadly stroked. The narration informs us of their reasons but the story slights the emotion behind them. Where the film succeeds the most is in portraying Maleficent’s recapturing her love, compassion and heart after falling so far from grace. In that alone Maleficent is likely to win many fans and cheers of approval. It is light and whimsical enough to entertain. But the conflicts themselves, the motivations that should drive the story, are too weak and fail to be engaging. Maleficent is a film that should have been gripping from beginning to end, drawing its audience to the edge of their seats, gasping with anticipations; unfortunately, for most, it will have them shuffling to get comfortable, reaching for their phones to see how much longer they will be left squirming waiting impatiently for it to end.