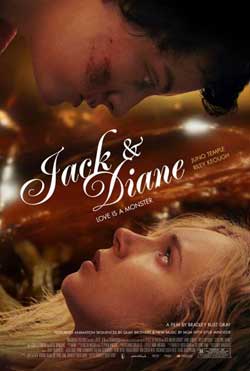 Jack and Diane, two teenage girls, meet in New York City and spend the night kissing ferociously. Diane’s charming innocence quickly begins to open Jack’s tough skinned heart. But, when Jack discovers that Diane is leaving the country in a week she tries to push her away. Diane must struggle to keep their love alive while hiding the secret that her newly awakened sexual desire is giving her werewolf-like visions.

I should say right off the bat that this is not a horror movie and neither is it anything to do with John Cougar Mellencamp. Yes there are a couple of brief sequences involving a sort of werewolf creature but this is simply a device used to embody a young girl’s sexual awakening. It’s not the first time such a device has been used either: Neil Jordan’s THE COMPANY OF WOLVES springs to mind, as does John Fawcett’s GINGER SNAPS. So having established that, if you’re a horror movie purist then you may want to give this film a miss and proceed directly to something that lies squarely in our beloved genre. It would be a pity to deliberately miss out on this movie altogether though because it’s a very sweet teenage romance, albeit an unconventional and quite explicit one.

Diane (Juno Temple) is a very innocent-looking young girl living in New York City at her aunt’s apartment. Her twin sister Karen, to whom she is very close, lives elsewhere. After a night’s clubbing, Diane finds herself stranded in Manhattan with no money and no phone. Stopping into a store to ask if she can borrow the owner’s phone, Diane catches the eye of Jack (Riley Keough), a tomboyish young skater girl who appears to live above the store. Finding they have an instant rapport, they spend the day together. At a club later that evening they kiss for the first time and thereafter are inseparable.

And there really isn’t much more to it than that. There are minor sub-plots about Diane fractious relationship with her aunt, Jack’s relationship with her deceased brother, and Karen’s involvement in web p*rnography but essentially the film is a selection of moments from a nascent romance so really it’s all about the characters. It’s a case of opposites attracting as Diane is a sweet, innocent, affectionate, slightly ditzy girl whereas Jack is an outwardly more confident, brash, worldly and independent girl.

The only element that might be deemed horror related is the hint that Diane may be some sort of lycanthrope. This is done by several means: first, Diane suffers from random nosebleeds, usually in stressful situations. It is hinted that these nosebleeds, or the sight of blood at any rate, might be the precursor to a transformation. Second, during these stressful moments we see an animated section which shows something unnatural (i.e. hairy) growing within Diane’s body. And finally we occasionally get a glimpse of a huge repellent beast that, in one sequence, tears into someone splattering blood and guts everywhere. I don’t think these hints are meant to be taken literally though: Diane isn’t a werewolf any more than she is a vampire or a zombie. These sequences are a metaphor for Diane’s sexual awakening and concomitant anxiety about it, no doubt compounded by her growing realization that she is a lesbian.

Bearing in mind that I’m about as far from this film’s intended demographic as it’s possible to get, I did quite enjoy it. The central relationship is well realized and as Jack and Diane, Riley Keough and Juno Temple make for an engaging couple and they’re two good naturalistic actors. It’s a good indication of how society has matured that such a relationship can now be the subject of a (relatively) mainstream movie and be non-exploitative. Having said that, as a coming-of-age drama it’s not particularly original or ground-breaking so I wouldn’t rate it as a definite ‘must see’, and certainly not for horror buffs, although it has enough incidental pleasures (particularly the acting) to make for a refreshing change.

Jack & Diane (2012) is now available on bluray per Magnolia Entertainment