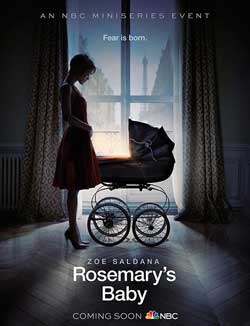 A young couple move into a new apartment, only to be surrounded by peculiar neighbors and occurrences. When the wife becomes mysteriously pregnant, paranoia over the safety of her unborn child begins controlling her life.

I’d love to know who the genius was at NBC who decided that a made for television remake of Roman Polanski’s “Rosemary’s Baby“ was a good idea. I don’t mean the names on the credits of the film either, names like Robert Bernachi or Cicely & Mariel Saldana who are among a plethora of listed producers on this film. I’m guessing they just jumped on the bandwagon after someone mentioned it to them as an extremely poor idea that should never come to pass. I’m looking to find out EXACTLY who the Mensa member was that actually thought that a remake of one of the best films of the 60’s (& one of the best horror films ever produced) was a good idea. After watching this absolute waste of time & talent, I would imagine that if he still has a job it’s only because he told NBC that he’s not feeling well & is staying home in an attempt to delay the inevitable. 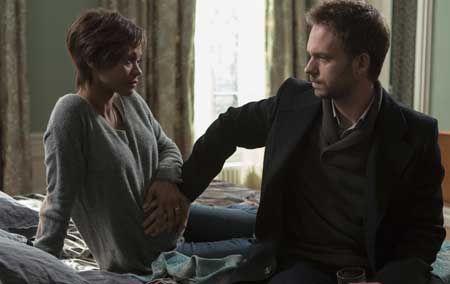 Now to be fair, there might be a few of you that aren’t aware or perhaps haven’t seen Polanski’s original (And if you’re one of these chosen few, then perhaps you’re reading the wrong website). I’d just like to apologize to those of you who fit into this category and implore you to run, don’t walk, to wherever it is you purchase dvd’s/bluray’s and spend a couple of bucks to purchase the original. Trust me, you won’t regret it.

I guess I gotta recount this mess for everybody now, huh? <> Although I’m the highest paid employee of HNN (Don’t tell Doc Rotten!), I don’t think I should be the one who ended up with this sorry assignment… 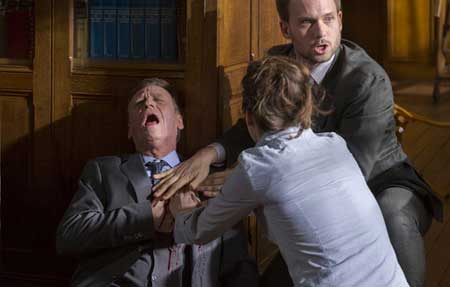 Young Rosemary Woodhouse (The woefully miscast Zoe Saldana) has just moved to Paris with her husband, Guy (Patrick J. Adams) in an attempt to start their lives over after she suffers a miscarriage back in the states and not knowing how to speak any French, finds herself at a loss when her purse gets snatched by a thief not long after they’ve settled into their tiny apartment. luckily, the thief is apprehended but (Thanks to a quick switch EVERYBODY notices, but her), she gets handed the wrong purse. Since Rosemary is so gosh darn honest, she seeks out the owner of the purse she receives and she finds her! The purse belongs to the lovely Margaux Castavet (Carole Bouquet) and once returned, there isn’t anything that Margaux won’t do for Rosie & her husband afterwards. Along with her husband, Roman (Jason Issacs), Margaux proceeds to ensure that nothing will ever go wrong in the lives of the Woodhouse family ever again and that includes the birth of the child that Rosie is about to start carrying in her tummy thanks to…SATAN!

Or maybe it isn’t Satan? Maybe Satan isn’t involved at all? Maybe it’s a group of Satan loving wiccan’s? That’s just one of the silly changes made to the script written by Scott Abbott (Queen Of The Damned) & James Wong (Final Destination 3) that really don’t make much of any sense at all. It doesn’t make any sense for myriad reasons but one of them pertains to the identity of the baby’s dad. Is it Satan? Is it Roman Castevet? Is it Steven Mercato? Who’s Steven Mercato you ask? Well, if you’ve seen the original film you’ll recognize the name & his identity. If you didn’t, then woe is you because the script doesn’t seem to know who he is either. And since when are witches satanists? Last I heard, satanism is a repudiation of christianity. Any witch worth her salt will tell you that witchcraft & spells have nothing to do with satanism whatsoever. This is something that the screenwriters chose to ignore in order to make this flick feel more ominous. Too bad they failed miserably. 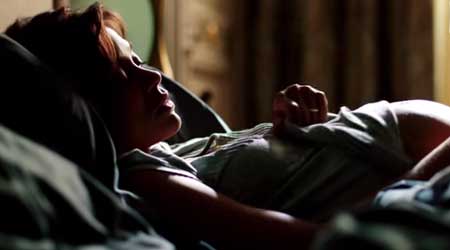 There are a lot more errors I can bring up, but I’d rather recount the few things that actually work in this flick. Director Agnieszka Holland manages to wrest some good performances out of her cast with Saldana doing the best she can despite being completely wrong for the part. Bouquet does a workmanlike job as Margaux but her strong accent obscures a lot of her lines and although Issacs is a fine actor he’s also miscast as Roman. He comes off so debonair & smooth it’s almost like James Bond is making an appearance as one of Satan’s minions. One of the things in the script that’s even remotely interesting is the sapphic nature of the relationship between Margaux & Rosemary but that aspect of the script is pretty much scrapped just as soon as it becomes interesting. Michel Amathieu’s cinematography is first rate and makes Paris even more gorgeous than usual. All supporting characters are servicable but a few of them have a ton of fun gnashing on scenery as they over emote.

If you haven’t guessed by now, I’ll spell it out for you: THIS MOVIE BLOWS. There’s no reason that the talent collected here couldn’t get together and read the phone book for 4 hours (Oh yeah, this thing ran over TWO nights, all because NBC knows what we want to see…), they could recite some of the names in creepy voices and be oodles scarier than what they ended up with here. Almost anything would be better than what they ended up with. And the ending! All I can say is that where Polanski knew enough to keep his audience guessing to what the baby ended up looking like, Holland & crew decided that a good look at the deep blue eyes of the baby would be….SCARY. 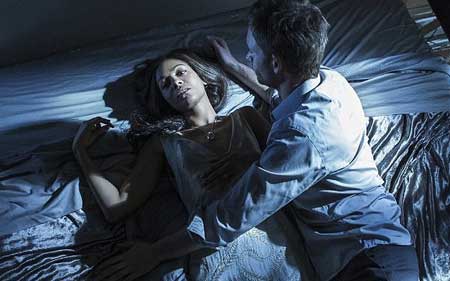 It ain’t. Sometimes the idea of “Less is More” really makes a difference. And tossing in some (Admittedly juicy) gore scenes just smacks of desperation. If you’ve already seen this crud, I’m sorry that you wasted your time. Go outside and enjoy the nice spring weather! If you haven’t seen it yet, please don’t. Isn’t life hard enough already? Go out there and console those of us who’ve already suffered through this junk. And pinky swear that you’ll just watch (Or re-watch) the original.